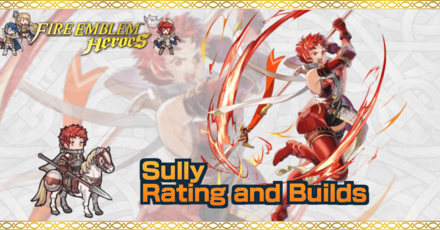 This is a ranking page for the hero Sully - Crimson Knight from the game Fire Emblem Heroes (FEH). Read on to learn the best IVs (Individual Values), best builds (Inherit Skill), weapon refinement, stats at Lv 40, and more for Sully.

The best IVs for Sully are +Atk and -HP. Her weapon boosts her Atk by 20% against red units so having a +Atk maximzes the potential of that 20% boost. Additionally, it is a superbane so you should take advantage of it as much as possible. Her HP is of less importance so it is safe to take it as a bane.

We recommend a +Atk IV when merging Sully to 10. This is for the same reasons as above. If you prefer nailing follow-up attacks instead of raw damage, you can go for a +Spd IV instead.

We recommend the Special Effect Refine for Bull Spear

If a cavalry ally using a sword, axe or lance is present within 2 spaces of Sully, Bull Spear's special effect refine grants her an extra attack. She will most likely be in cavalry-emblem teams so this trigger condition is trivial. Take note that it is an extra attack this means that if she scores a follow-up attack through outspeeding or through Swordbreaker 3, she will land 4 hits on the enemy. There's no ignoring 4 hits! This is an extremely powerful special refine so we recommend getting it if Sully is one of your main units.

A cavalry-emblem team is a team composed of all cavalry units.

Sully is a close physical attacker (range = 1). Therefore, when not accounting for the Weapon Triangle, the amount of damage she deals will be equivalent to her Atk minus the foe's Def stat.

Cavalry unit with above average Spd!

Sully's base Spd is 34. This is above average for cavalry units. With skills like Hone Cavalry and Goad Cavalry, you can boost it to 44 Spd! If she is up against a red unit and she lands a follow-up attack, odds are that unit will not survive.

The special effect refine for Bull Spear grants an extra attack if she meets certain conditions! Since it is an extra attack, Swordbreaker 3's effects will still kick-in. This allows Sulli to land 4 hits on sword units during the enemy phase! There's no sword unit surviving 4 hits from Sully who also has Triangle Adept 3 present in her weapon!

Sully comes with the skill Swordbreaker 3, which gives her a guaranteed follow-up attack against a sword wielder, while also preventing the foe from making their own follow-up attack. This powerful advantage over sword type foes makes her a tough unit. This gives her lots of value as sword units are one of the most common in the game!

Note that this only activates if she is at least at 50% HP or above.

Versatile skill in Draw Back

Sully has average Atk and and above average Spd. However, this is not enough against more powerful units. This makes some match-ups pretty hard if not against red units whom she is very strong against. Unless you swap Sapphire Lance+ for the Bull Spear and get its special effect refine, expect bad match-ups on your way.

Support her with skills like Hone Cavalry and Goad Cavalry to help her take down more non-red foes with ease.

We Do Not Recommend Unlocking Potential for Sully - Crimson Knight!

Sully as a Source Hero

Inheriting Draw Back and Swordbreaker 3

Sully can be used to inherit the skills Draw Back and Swordbreaker 3. If you do not plan to use Sully in combat, it may be wise to turn her into a Combat Manual instead of turning her into feathers.

How to Get Sully / Illustrations / Voice Actor / Quotes

How to Get Sully

Sully is a Hero who can be pulled from any summon.

Register as a member and get all the information you want. (It's free!)
Login
Opinions about an article or post go here.
Opinions about an article or post
We at Game8 thank you for your support.
In order for us to make the best articles possible, share your corrections, opinions, and thoughts about "Sully Builds and Best IVs" with us!
When reporting a problem, please be as specific as possible in providing details such as what conditions the problem occurred under and what kind of effects it had.