This is a walkthrough to Hall of Forms event in Fire Emblem Heroes (FEH). If you would like to know how to play this event, as well as rewards, strategy, and other information about Hall of Forms, please read on.

Sara is a viable choice for a Forma Soul

Sara is a great choice for using a Forma Soul solely because of Kia Staff, which can cleanse debuffs of multiple allies with proper teambuilding.

She makes for a great unit to field in Aether Raids defense with Kia Staff cleansing debuffs and Return+ to reposition allies into advantageous positions. This setup with Sara requires a Winter Bernadetta as well to manipulate the AI to use Return+, so if you have her, feel free to try that defense out.

Aim to get supportive skills for her C slot like Joint Drive Atk or Cross Spur Atk!

You Cannot Use Forma Units as Skill Inheritance Fodder

Please take note that you cannot use any units obtained through Hall of Forms as fodder for Skill Inheritance. Be careful when you're exchanging!

What is Hall of Forms?

Hall of Forms is an event where you must battle using only a pre-determined set of heroes called Forma to work your way through an increasingly difficult set of levels called Chambers. The Forma begin at lower levels, but you can level them up and even teach them new skills to proceed. Forma are only used in Hall of Forms, and it is not possible for you to use any of your own heroes in this event.

Make Use of a Special Type of Stamina

Hall of Forms uses a special kind of stamina when played. You will receive three of these stamina every day, meaning that you can challenge the event three times daily when active. Additionally, you can earn Forma Torches as a reward in this event, which can be used to refill your stamina.

Level Up Your Forma!

Forma begin at low levels with no known skills. Just like regular heroes, they can be leveled up after gaining Exp. through defeating foes. Since they level up much more quickly than regular heroes, you should be able to train them to become very powerful even with limited battles.

When clearing each map, you will have a change to power up your Forma. This allows you to equip them with a skill or Sacred Skill from a randomly chosen list, or give them a +1 merge. The Forma who first defeats a foe in battle will be the only one to upgrade, so think carefully about which ally you want to give skills or bonuses to, and make sure they does not go to one who has already obtained many useful skills and upgrades if other allies still lack them. 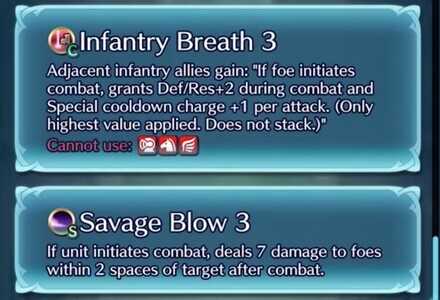 When Shaping Your Forma, you will be given a list with one of each type of equippable skill: Weapon Skill, Assist Skill, Special Skill, Passive Skill A, Passive Skill B, Passive Skill C, and Sacred Seal. The list that you are given is completely random, so if a good skill shows up, you will be able to really power your Forma up. When selecting a skill, it is learned automatically, so you do not need to spend SP before you can use it.

In the Infernal difficulty maps, two skills each will be offered for the A, B, and C skill slots instead of just one.

Also, the skills that appear will only be exclusive skills or skills that cost 240 SP or more, so be sure to try to clear Infernal maps to take advantage of this!

Lost if All Units are Defeated

If all of your units are defeated in a battle, you won't have a chance to shape your forma, and they will not retain any levels gained in battle. On the contrary, as long as at least one unit survives until the end, the first unit to defeat an enemy will be able to gain a skill/merge, and all levels gained will be retained, so make sure that you don't get any Game Overs, or your precious Stamina will essentially be wasted.

Level Up and Gain Skills at Lower Level Chambers

As you continue to clear more and more chambers, the difficulty will go up significantly. Since getting a Game Over means you will not be able to strengthen any of your units, you should avoid taking on higher level Chambers until your units are powerful enough for them. If you feel like you will have a hard time clearing the next Chamber, go back to an already cleared lower-level Chamber to level up and gain new skills, and once your units are powerful enough, proceed ahead!

Also note that you will generally have an easier time clearing Chambers with fewer enemy units. For higher level Chambers, try to avoid going in when there are five enemies if possible, and instead use the oppotrunity to Shape your Forma at an easier level until the next Chamber has only three or four enemies!

Earn Prizes from each Chamber

You will obtain a reward for your first time clearing a Chamber. Be sure and clear each chamber at least once to get all of the rewards.

Obtain Daily Rewards for your first map cleared each day

In Hall of Forms, you can earn Orbs and Dragonflowers as a reward for your first time clearing a map each day. These are totally different from the rewards gain by clearing chambers, so be sure and come back daily for an easy reward.

See more comments (5 Comments)
Opinions about an article or post go here.
Opinions about an article or post
We at Game8 thank you for your support.
In order for us to make the best articles possible, share your corrections, opinions, and thoughts about "Hall of Forms Guide and Rewards" with us!
When reporting a problem, please be as specific as possible in providing details such as what conditions the problem occurred under and what kind of effects it had.