Who Should You Pull?
★ Pirate's Pride 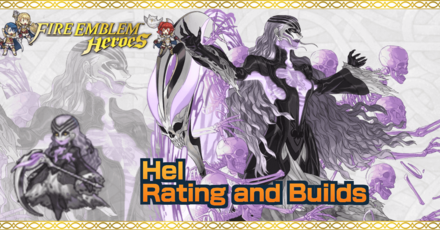 This is a ranking page for the hero Hel - Death Sovereign from the game Fire Emblem Heroes (FEH). Read on to learn the best IVs (Individual Values), best builds (Inherit Skill), weapon refinement, stats at Lv 40, and more for Hel.

The best IVs for Hel are +Spd and -Res. A +Spd adds to her already amazing Spd of 41. This helps her score more follow-up attacks and take less follow-up attacks from enemies. It also works very well with the effect of Hel's Reaper as a follow-up attack will knock her off the 1 HP blessing. Lastly, her Spd is a superboon so you should take advantage of it as much as possible. Her Res is of less importance and she is not built for taking magic damage so it is safe to take as a bane.

We recommend a +Spd IV when merging Hel to 10. This is for the same reasons as above. At this point, Hel will be able to evade follow-up attacks from even the fastest of foes with skills like Swift Sparrow 3 or Atk/Spd Push 4.

Hel's weapon cannot currently be refined. This section will be updated if it becomes refineable in the future!

Hel is a close physical attacker (range = 1). Therefore, when not accounting for the Weapon Triangle, the amount of damage she deals will be equivalent to her Atk minus the foe's Def stat.

A Mythic Hero who can boost her allies' HP and Def

Hel is a Mythic Hero who will also give you a Dark Blessing when summoned. During Dark Season, Hel's allies who also have a Dark Blessing will receive a HP+5 and Def+5 to their stats, increasing the party's usability.

Not only Hel's Reaper allows her to withstand lethal damage with 1 HP once per combat, but it also negates weapons that are effective against flying units. This makes her more durable than she appears to be at first glance. This makes her perfect for the sole wielder of the C skill, Inevitable Death which is discussed in detail down below. She can freely breeze through the battlefield with little worry of being taken out while applying the debuffs of Inevitable Death.

Guard Bearing reduces the damage of the first attack of the first combat engagement in the enemy phase by 50%. She also has access to Distant Counter which punishes ranged units if she attacks her. Combined with Hel's Reaper and the to-be-discussed Inevitable Death that works in the enemy phase, she is a complete enemy phase power house. Put her into your front lines and watch the enemies fall one-by-one!

A powerful and wide debuff inflicted against enemies

Hel's C skill, Inevitable Death inflicts -4 to all stats on foes within 2 spaces in combat. The range and ease of activation makes this skill very convenient and very powerful. This debuff can be utilized both by Hel and her whole team. Put Hel into your frontlines as to make the best use of Inevitable Death!

Unlike other skills, Hel does not need to be within 2 spaces of an enemy at the start of the turn for this debuff to activate. You can adjust Hel's position by moving her or using skills like Shove mid-phase for it to take effect! Make use of this skill's versatility.

Not good an prolonged engagements

Hel's Reaper only protects Hel from getting knocked out once per combat so if she takes multiple attacks from multiple enemies, she will be taken out. Since her presence in the battlefield is very important as she has the powerful debuff from Inevitable Death, pair her with units that have passive heals such as her daughter Eir or Reyson to prolong her presence in the battlefield.

Should you Unlock Potential for Hel?

Hel - Death Sovereign Only Appears as a 5 Star Hero!

Hel as a Source Hero

Hel can be used to inherit the skills Distant Counter and Guard Bearing 3. However, as a powerful Dark Mystic Hero that can be used in Aether Raids, we recommend keeping at least one Hel before foddering off any duplicates.

How to Get Hel / Illustrations / Voice Actor / Quotes

How to Get Hel

Hel is a limited time Hero who can be pulled from a Mythic Hero Summoning event. They do not appear in regular summons.

Register as a member and get all the information you want. (It's free!)
Login
Opinions about an article or post go here.
Opinions about an article or post
We at Game8 thank you for your support.
In order for us to make the best articles possible, share your corrections, opinions, and thoughts about "Hel Builds and Best IVs" with us!
When reporting a problem, please be as specific as possible in providing details such as what conditions the problem occurred under and what kind of effects it had.