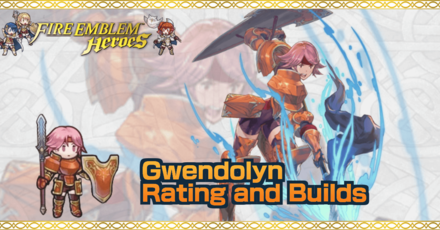 This is a ranking page for the hero Gwendolyn - Adorable Knight from the game Fire Emblem Heroes (FEH). Read on to learn the best IVs (Individual Values), best builds (Inherit Skill), weapon refinement, stats at Lv 40, and more for Gwendolyn.

The best IVs for Gwendolyn are +Def and -Spd. A higher Def stat will allow her to fulfill her role as a physical tank more effectively. Her Spd is pretty low and it is safe for Gwendolyn to take as a dump stat.

We recommend the Special Effect Refine for Weighted Lance

Gwendolyn's defensive native special, Escutcheon, only has a cooldown count of 2. This means that she can almost always trigger it thanks to Weighted Lance. With a healer, she can easily maintain the HP ≥ 50% requirement for the +4 Def/Res that adds to her already amazing bulk. Offensive Gwendolyns who heavily rely on Bonfire or Ignis to deal damage will greatly benefit from it as well. Therefore, we recommend the special effect refine for Weighted Lance.

Gwendolyn is a close physical attacker (range = 1). Therefore, when not accounting for the Weapon Triangle, the amount of damage she deals will be equivalent to her Atk minus the foe's Def stat.

Gwendolyn's Def is very high, and her Res is also pretty goodl! She can tank many of the units in the game.

Can Put Enemies in Compromising Positions

Gwendolyn's high bulk comes with a price. Her offensive power is not very high. We recommend inheriting special skills like Bonfire and Ignis to utilize her high defenses into her offense.

Should you Unlock Potential for Gwendolyn?

We Do Not Recommend Unlocking Potential for Gwendolyn - Adorable Knight!

Gwendolyn as a Source Hero

Gwendolyn can be used to inherit the skill Hone Armor. Gwendolyn is unique in the sense that she is a common hero that possesses this rare skill. Even if you don't want to train and build around Gwendolyn, it would be smart if you kept her as a Combat Manual.

How to Get Gwendolyn / Illustrations / Voice Actor / Quotes

How to Get Gwendolyn

Gwendolyn is a Hero who can be pulled from any summon.

Register as a member and get all the information you want. (It's free!)
Login
Opinions about an article or post go here.
Opinions about an article or post
We at Game8 thank you for your support.
In order for us to make the best articles possible, share your corrections, opinions, and thoughts about "Gwendolyn Builds and Best IVs" with us!
When reporting a problem, please be as specific as possible in providing details such as what conditions the problem occurred under and what kind of effects it had.