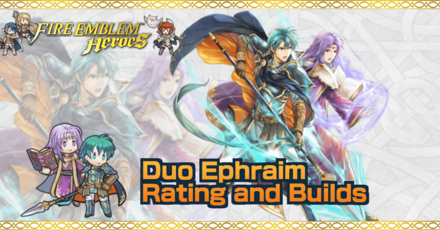 This is a ranking page for the hero Ephraim - Dynastic Duo from the game Fire Emblem Heroes (FEH). Read on to learn the best IVs (Individual Values), best builds (Inherit Skill), weapon refinement, stats at Lv 40, and more for Duo Ephraim. 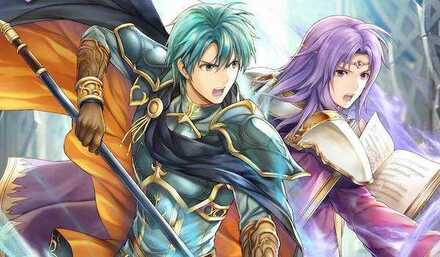 Duo Ephraim's best IVs are +Atk and -Res. With his superboon in Atk, he gains an additional +4, making the guaranteed follow-up effect of Reginleif even easier to trigger. A bane in HP or Spd would give him -4 in either stat, so Res is the more ideal bane.

If you are building a +10 merge of this unit, we recommend +Atk. As Ephraim's weapon skill already lets him gain a guaranteed follow-up, there is no reason to go for +Spd, unless you aim to also prevent as many follow-up attacks from foes as possible. Once again, with the increased effectiveness from his weapon skill and strength from each attack factored in, +Atk is probably the best choice.

Duo Ephraim's exclusive weapon cannot currently be refined! This section will be updated if it becomes refineable in the future.

Duo Ephraim is a close physical attacker (Range = 1). When the effects of the Weapon Triangle are not taken into account, the damage he deals will be equal to his Atk minus the foes's Def.

Ephraim's Duo Skill raises his arena score, in addition to granting him a powerful battle effect. Duo Heroes have a Duo Skill which can be used once per map. Additionally, his Duel effect treats his stats as 185 in Arena modes, giving him a huge advantage over many other heroes.

The effect of Ephraim's Duo Skill is shown below 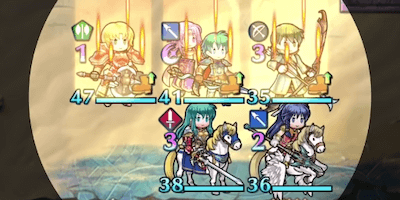 Infantry and armored allies within 2 spaces of unit (including unit) can move 1 extra space. (That turn only. Does not stack.)
(Duo Skills can be used once per map by tapping the Duo button. Duo Skills cannot be used by units deployed using Pair Up.)

Duo Ephraim has a powerful Duo skill, which will grant +1 movement to both him and nearby infantry/armored allies. On top of being able to support his allies and increase the range in which he can move for a turn, this also allows the effects of his weapon Reginleif to trigger, making it extremely useful.

Weapon is effective on two types and grants follow-up attacks

Duo Ephraim's exclusive weapon skill Reginleif is effective on armored and cavalry units, allowing him to deal massive damage to these types of foes. Additionally, when his Atk exceeds that of the foe, OR he has been granted extra movement (via his Duo Skill, etc.), he will gain a guaranteed follow-up attack, which greatly extends his offensive capability. You can easily buff his Atk further through seals or skills, making this unit very powerful thanks to how easy it is for him to deal heavy damage in this way.

Ephraim's B skill Lull Atk/Def 3 will nullify active enemy bonuses, and simultaneously inflict Atk/Def-3. This skill is great for cancelling out skills like Fortify or Rally and increasing the damage Ephraim can output in combat while reducing the damage he takes, but keep in mind that it will have no effect on Drive/Spur bonuses.

Duo Ephraim has a rather low Res stat, so he will take lots of damage from magic attackers. Additionally, his Spd stat is pretty subpar, so he takes many follow-up attacks too. A speedy dragon or magic and easily sweep him, so be sure and observe the range of your foes and stay far away from magic attackers who could wipe him out.

Should you Unlock Potential for Duo Ephraim?

Ephraim - Dynastic Duo Only Appears as a 5 Star Hero!

Duo Ephraim as a Source Hero


How to Get Duo Ephraim / Illustrations / Voice Actor / Quotes

How to Get Duo Ephraim

Duo Ephraim is a Hero who can be pulled from any summon.

Register as a member and get all the information you want. (It's free!)
Login
Opinions about an article or post go here.
Opinions about an article or post
We at Game8 thank you for your support.
In order for us to make the best articles possible, share your corrections, opinions, and thoughts about "Duo Ephraim Builds and Best IVs" with us!
When reporting a problem, please be as specific as possible in providing details such as what conditions the problem occurred under and what kind of effects it had.