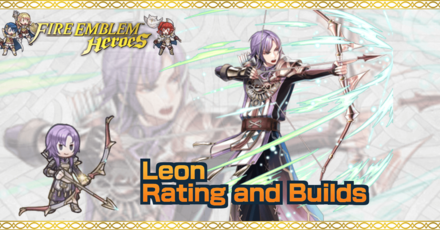 This is a ranking page for the hero Leo - Sorcerous Prince from the game Fire Emblem Heroes (FEH). Read on to learn the best IVs (Individual Values), best builds (Inherit Skill), weapon refinement, stats at Lv 40, and more for Leo.

The best IVs for Leo are +Def and -HP. Leo's weapon, the Brynhildr, has a special effect refine that is reliant on Leo's Def. A +Def IV allows him to utilize the refine effect easily. Spd is not important to him and his kit as he can nail follow-up attacks using Quick Riposte 3, so it is safe to take as a bane.

We recommend a +Def IV when merging Leo to 10. With +10 merges, Leo's Def stat will reach 33. This makes it very easy for him to trigger the effects of a specially refined Brynhildr. If you plan on using a different tome, you can go for a +Atk IV instead.

We recommend the Special Effect Refine for Brynhildr

The effect prevents ranged enemies from scoring follow-up attacks on Leo if his Def is more than theirs. We recommend getting this refine as it grants Leo a number of favorable match-ups against ranged units. This effect is the reason why we recommend getting a +Def copy of Leo. This skill is discussed in more detail in the Strengths and Weaknesses section.

Leo is a ranged magic attacker (range = 2). Therefore, when not accounting for the Weapon Triangle, the amount of damage he deals will be equivalent to his Atk minus the foe's Res stat.

Leo's Brynhildr limits units to 1 space of movement if he initiates attacks. If an ally has Draw Back and uses it on Leo to get him away from the inflicted foe, Leo can effectively kite enemies to a certain extent. However, unlike staff users, Leo can not have access to Dazzling Staff so he can not prevent counterattacks from hitting him. Brynhildr, however, can block follow-up attacks from ranged enemies if Leo has greater Def than them. Using Leo as a kiter instead of a Dazzling Staff unit would definitely result in more damage, but he can not do it indefinitely as the counterattacks will eventually wear him down.

If you are planning on running this strategy with Leo, we strongly recommend having is a Savage Blow 3 Sacred Seal on him. It works really well with Blazing Light and Leo's Savage Blow 3 C skill. This allows Leo to deal huge amounts of AoE damage and wear down the other enemies Leo is not currently focusing on.

As discussed in the Weapon Refine section and in Leo's previous strength, Brynhildr prevents ranged enemies from scoring follow-up attacks on Leo provided that he has a higher Def compared to said unit. The synergy with his kit and sample strategies are discussed above.

Blazing Light deals fixed damage to a certain spots around the target. It is a great special in maps that have clumped up enemies like Rival Domains. It is strong against enemies that have high defenses, as it deals fixed damage regardless of Res or Def (although some skills reduce the damage taken from AoE skills). A lot of strategy can be put into using Leo's Blazing Light. You will be surprised at its true potential when used correctly.

Leo has access to Quick Riposte 3 which means as long as he is at 70% HP or above, she will score a follow-up attack when attacked in the enemy phase. This means he has means of scoring follow-up attacks on both phases.

Because of Leo's low Spd, a lot of enemies can score follow-up attacks on him unless Brynhildr's special refinement effect is in play. Be mindful of foes that can easily take Leo out. Adjust the way you play and position him in relation to these enemies so to keep Leo alive.

Difficult to make use of Brynhildr

Brynhildr is dependent on Leo's defense for it to block follow-up attacks. However, Leo has very low defenses even at +Def +10 merges! He reaches 33 at that point so the range of Brynhildr's effect is quite limited. However, when he can trigger the effects, he can kite the enemy effectively with a repositoning skill from an ally.

Should you Unlock Potential for Leo?

Leo - Sorcerous Prince Only Appears as a 5 Star Hero!

Leo as a Source Hero

Leo can be used to inherit the skill Quick Riposte 3. This is a powerful skill that helps low Spd characters score follow-up attacks. If you do not plan on using Leo, you can turn him into a Combat Manual instead.

How to Get Leo / Illustrations / Voice Actor / Quotes

How to Get Leo

Leo is a Hero who can be pulled from any summon.

Register as a member and get all the information you want. (It's free!)
Login
Opinions about an article or post go here.
Opinions about an article or post
We at Game8 thank you for your support.
In order for us to make the best articles possible, share your corrections, opinions, and thoughts about "Leo Builds and Best IVs" with us!
When reporting a problem, please be as specific as possible in providing details such as what conditions the problem occurred under and what kind of effects it had.