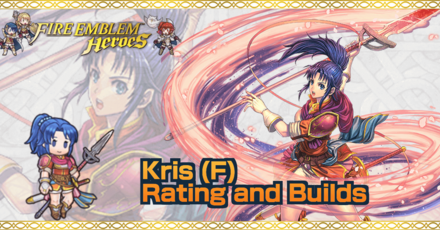 This is a ranking page for the hero Kris - Unsung Hero from the game Fire Emblem Heroes (FEH). Read on to learn the best IVs (Individual Values), best builds (Inherit Skill), weapon refinement, stats at Lv 40, and more for Kris (F).

The best IVs for Kris (F) are +Spd and -Res. A higher Spd stat allow Kris (F) to get a ton of follow-up attacks on her foes. Additionally, her Spd is a superboon so you should take advantage of the +4 in the stat. Lastly, having a high Spd makes her tankier through Spurn 3. Res is of lower priority and she can boost it with Rouse Spd/Res 3 so it is safe to take as a bane.

We recommend a +Spd IV when merging Kris (F) to 10. This boosts her offensive power by being able to execute follow-up attacks more frequently. It also boosts her defenses because of the effects of Spurn 3, and a higher Spd also makes her less susceptible to follow-up attacks.

Kris (F)'s weapon cannot currently be refined. This section will be updated if it becomes refineable in the future!

Kris (F) is a close physical attacker (range = 1). Therefore, when not accounting for the Weapon Triangle, the amount of damage she deals will be equivalent to her Atk minus the foe's Def stat.

Blade of Shadow is a powerful weapon

On top of accelerating Kris' special trigger, Spear of Shadow also neutralizes penalties on Kris and inflicts -5 Atk/Spd/Def on her enemy if foe initiates combat or if foe's HP is at 100% at the start of combat. These effects makes Kris a formidable offensive unit in both phases of a turn.

The newly released skill, Spurn reduces the damage taken by Kris if her Spd > foe's Spd. It also grants +5 damage when her special triggers if his HP ≤ 75%. Together with Spear of Shadow and Moonbow, Spurn makes Kris a very powerful hero in the enemy phase whose counterattacks are very deadly.

Rouse Spd/Res 3 grants Kris (F) +6 Spd/Res if she is not adjacent to an ally at the start of the turn. It is a fairly powerful buff that requires little to no strategical adjustment to take advantage of.

Kris (F)'s Res only sits at 25 at Lv.40. This makes it easy for magic users to take her out. Be mindful of Kris (F)'s positioning in relation to magical units that can easily take her out.

Make proper use of Rouse Spd/Res 3 to get a higher Res level!

Should you Unlock Potential for Kris (F)?

Kris - Unsung Hero Only Appears as a 5 Star Hero!

Kris (F) as a Source Hero

Kris can be used to inherit the skills Spurn and Fury 4. However, these are very rare skills and Kris is a very powerful hero. Consider your goals and needs before fodderring for these skills.

If you are able to inherit Fury 3 from another unit, you can get both skills from one copy of Kris (F).

How to Get Kris (F) / Illustrations / Voice Actor / Quotes

Kris (F) is a Hero who can be pulled from any summon.

Register as a member and get all the information you want. (It's free!)
Login
Opinions about an article or post go here.
Opinions about an article or post
We at Game8 thank you for your support.
In order for us to make the best articles possible, share your corrections, opinions, and thoughts about "Kris (F) Builds and Best IVs" with us!
When reporting a problem, please be as specific as possible in providing details such as what conditions the problem occurred under and what kind of effects it had.