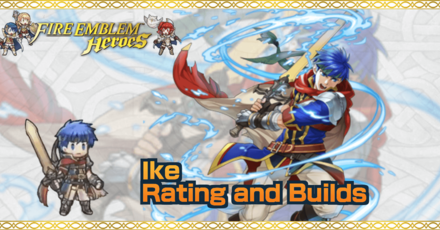 This is a ranking page for the hero Ike - Young Mercenary from the game Fire Emblem Heroes (FEH). Read on to learn the best IVs (Individual Values), best builds (Inherit Skill), weapon refinement, stats at Lv 40, and more for Ike.

IKe's best IVs are +Spd and -HP. Ike already possesses the skill Swordbreaker, but a higher Spd stat will help prevent follow-up attacks from foes wielding other weapon types. His HP stat is a relatively low priority so ideally it should be the lower of these stats.

This build involves having Ike inherit Fury and Vantage. Equipping him with Vantage allows him to counterattack a foe at any range, before they can even attack. Fury inflicts self damage, making Vantage’s conditions quicker to satisfy. A staple skillset for Ike.

A skillset composed of Steady Breath and Quick Riposte. Endure the foe’s attacks and counterattack with Aether to deliver the final blow!

This is a high budget build that utilizes Ragnell's Special trigger acceleration. With Noontime and Mystic Boost 3, Ike can keep himself healthy, though you can opt for another Special like Bonfire if you want more firepower.

We recommend the Special Effect Refine for Ragnell

Ike is a close-range physical attacker. When the effects of the Weapon Triangle are not taken into account, the damage he deals will be equal to his Atk minus the foes's Def. Additionally, Ike possesses skills that allow for counterattacks at any range and give him an edge against other sword wielding units.

Thanks to Ike's passive skill Heavy Blade, he can shorten the time it takes to activate his special. With this skill, he receives Special cooldown charge +1 per attack if his Atk is greater than the foe's.

Counter any attack with Ragnell!

Ike's weapon skill Ragnell allows him to counterattack, regardless of range. This skill is excellent for infantry sword units, as they are often easily picked off from a distance.

With Ragnell's weapon refine, Ike will also now grant himself additional stats and also accelerate his Special trigger, enabling him to one-shot opponents with a counter attack if given a low cooldown Special such as Noontime, Bonfire, or Ruptured Sky.

Swordbreaker gives him an edge against other sword units!

Ike is a fierce opponent not just for green foes, but also for other sword wielding units, thanks to his passive skill Swordbreaker. Being able to take on sword units, who are very high in number in this game, is a huge advantage for him.

Ike is a powerful Hero who can counter foes even at a distance, but his low Res means he falls short against tome weilding units, so he is often defeated by them before getting a chnace to counterattack.

Ike's weak point lies in the fact that his low Res makes him struggle against dragons. Nowi and Corrin (F) present particular challenges for him, as their attacks are also type effective.

Ike - Young Mercenary Only Appears as a 5 Star Hero!

Ike as a Source Hero

Ike can be used as a source for Aether, or possibly Heavy Blade 3. However, since Heavy Blade can also be obtained as a sacred seal, think carefully before foddering off Ike as a source Hero.

How to Get Resplendent Ike / Illustrations / Quotes

How to Get Resplendent Ike

Resplendent Ike can be obtained by buying a FEH Pass. After the distribution period has ended, they can also be purchased by FEH pass subscribers.

How to Get Ike / Illustrations / Voice Actor / Quotes

How to Get Ike

Ike is a Hero who can be pulled from any summon.

Register as a member and get all the information you want. (It's free!)
Login
Opinions about an article or post go here.
Opinions about an article or post
We at Game8 thank you for your support.
In order for us to make the best articles possible, share your corrections, opinions, and thoughts about "Ike Builds and Best IVs" with us!
When reporting a problem, please be as specific as possible in providing details such as what conditions the problem occurred under and what kind of effects it had.