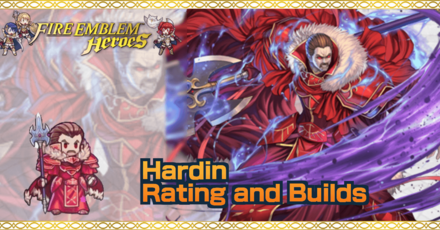 This is a ranking page for the hero Hardin - Dark Emperor from the game Fire Emblem Heroes (FEH). Read on to learn the best IVs (Individual Values), best builds (Inherit Skill), weapon refinement, stats at Lv 40, and more for Hardin.

The best IVs for Hardin are +Atk and -Spd. This will increase the amount of damage he deals per attack. Since he can score follow-up attacks through Bold Fighter, Spd is not so much of importance to him.

Take note that his Spd is a superbane—this means that he will suffer a -4 reduction instead of a -3 when taking it as a bane. The first merge on a unit completely cancels out the bane. If you plan to use Hardin as one of your main units, make sure to get that first merge as soon as possible!

We recommend a +Res IV when merging Hardin to 10. At +10 Merges, Hardin's Atk will reach such high levels that pushing it up higher is a waste, considering he has access to Bold Fighter 3. At this point, it would be better to opt with a +Res IV instead. This balances his defenses, and allows him to soak up damage from all kinds of units. You can still go for a +Atk IV if you want maximum damage though. Just make sure that you look out for fast magic attackers that can nail a follow-up attack on him.

Keep in mind that with the release of Trait Fruits, you can freely change Hardin's IVs without pulling for him.

This is a high budget build that utilizes Gradivus' refine to boost Hardin0s' firepower while granting him sustain. You can opt for another Special like Bonfire or Noontime, and can also opt to substitute the Mystic Boost 3 seal for Quick Riposte 3. You can also opt for A/R Far Save 3 if you want Hardin to tank ranged physical units as well.

We recommend the Special Effect Refine for Gradivus

Gradivus' refine grants Hardin Atk/Sd/Def/Res+4 and will heal him after combat, even if he dealt 0 damage.

This gives him bulkiness and sustain, enabling Hardin to be able to tank more hits.

Hardin is a close physical attacker (range = 1). Therefore, when not accounting for the Weapon Triangle, the amount of damage he deals will be equivalent to his Atk minus the foe's Def stat.

Gradivus has a built-in Distant Counter

Gradivus allows Hardin to score counterattacks even on ranged units. This makes him a decent enemy phase unit especially when you take into consideration the nature of his full kit! It patches his limited movement by allowing him to damage those who come near him.

With the weapon refine, it will grant Hardin Atk/Spd/Def/Res+4 and will heal him even if he dealt 0 damage during combat. This grants him higher firepower and sustain to tank more hits.

Powerful Def and Res buff when HP gets low enough

Hardin's A Skill Brazen Def/Res will give him Def/Res+7 when his HP is below 80%. Taking damage increases his defensive stats so that he can tough through combat so make sure that he is always in the frontline soaking up hit for his team. As mentioned, this synergizes well with Vengeance.

If you can afford to do so, equip either a Distant Def 3 or a Close Def 3 Sacred Seal onto Hardin depending on what maps you will be tackling. If he reaches Brazen range with these Seals, he becomes very hard to take down as he will boast huge Def/Res levels. Check out our recommended builds section to learn more!

All these abilities and quirks make Hardin a great dual-phase unit. He lands follow-up attacks in the player phase with Bold Fighter 3 and he can take quite a beating from enemies during the enemy phase whilst dealing respectable amounts of damage himself!

Hardin has a base Spd of 28. This makes it easy for fast units to deal huge amounts of damage to him. If he does not have a skill like Wary Fighter 3 that can protect him from follow-up attacks, make sure that you position him properly in relation to fast units that pose a threat to him. However, if they get Hardin to a HP range that he can exploit with Vengeance, make sure to seize the opportunity as a Vengeance-boosted attack from Hardin hits hard.

Another way to protect Hardin from units that threaten him is to get to them before they get the chance to initiate on Hardin. Equip him with seals or skills like Armor March 3 to make it easy for him to utilize the effects of Bold Fighter 3 when initiating attacks! Armor March is also available as a Sacred Seal.

Hardin takes 1.5x damage from armor-effective weapons like Armorslayer+ or Hammer+, and one blow from this type of weapon is sure to take him down. Make sure you know what weapons you are up against before hopping too far into the line of battle!
Heroes with Effective Skills

Hardin - Dark Emperor Only Appears as a 5 Star Hero!

Hardin as a Source Hero

Hardin can be used to inherit the skill Bold Fighter 3. However, Hector is a pretty powerful unit. Unless you have similar units like Forsyth or Brave Hector, it is best that you do not fodder him off, and we recommend that you build around him instead.

How to Get Hardin / Illustrations / Voice Actor / Quotes

How to Get Hardin

Hardin is a Hero who can be pulled from any summon.

Register as a member and get all the information you want. (It's free!)
Login
Opinions about an article or post go here.
Opinions about an article or post
We at Game8 thank you for your support.
In order for us to make the best articles possible, share your corrections, opinions, and thoughts about "Hardin Builds and Best IVs" with us!
When reporting a problem, please be as specific as possible in providing details such as what conditions the problem occurred under and what kind of effects it had.