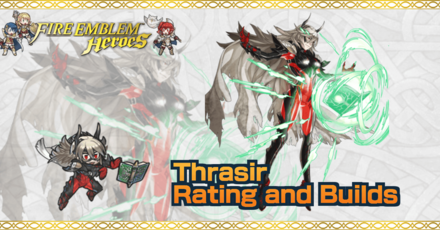 This is a ranking page for the hero Thrasir - Omnicidal Witch from the game Fire Emblem Heroes (FEH). Read on to learn the best IVs (Individual Values), best builds (Inherit Skill), weapon refinement, stats at Lv 40, and more for Thrasir. 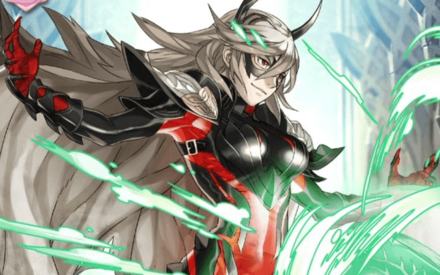 Thrasir's best IVs are +Spd and -HP. Her B skill has a similar effect to that of Desperation built into it, so the easier it is for her to trigger follow-up attacks, the better. This stat is also a superboon for her, so an asset will allow her to get Spd+4.

Thrasir is a ranged magic attacker (range = 2). Therefore, when not accounting for the Weapon Triangle, the amount of damage she deals will be equivalent to her Atk minus the foe's Res stat.

Exclusive weapon that is effective on dragons

Thrasir's exclusive weapon Ífingr is effective on dragongs, and will give her a +4 buff to all stats in combat if she is within 3 spaces of an ally. On top of this, it will negate that foe's guaranteed follow-up attack. While this is a very good weapon skill, it will also inflict a penalty on the nearest ally after combat, so you must keep an eye on where you are positioning your units.

Exclusive skill with built in Desperation

Thrasir's B skill Killing Intent will inflict Spd/Res-5 on a foe in combat and allow Thrasir to get a follow-up attack before the foe's counterattack, if that foe has taken damage or has an active penalty cast on them.

If an ally has a Seal skill, or an ally like Duma can cast damage on all foes on the first turn, this skill will be very easy to trigger, so edit your team with an ally who can help trigger it.

Flashing Blade 4 will give Thrasir special cooldown charge +1 and +5 damage on her special when her Spd exceeds that of the foe. This has excellent synergy with Killing Intent, and effectively makes it so that Moonbow will be ready to trigger after the first attack, and on her follow-up attack, her special will deal additional damage, easily wiping out a large number of foes.

Inflicts a debuff on nearby allies after combat

Thrasir's exclusive weapon Ífingr gives her a powerful buff during combat with a nearby ally, but after this effect triggers, it will cast a significant penalty on that ally. This penalty can be eliminated through Harsh Command or Restore, so pairing her together with an ally that has one of these skills is a good move.

Flayn provides great heals, damage reduction, and movement-assist to Thrasir. She is a very powerful support unit! If you do not have Flayn, any other healer can do. Refresher-assist supports are great partners for Thrasir too.

Reyson and Leanne provide both heals and refreshes to Thrasir so she can brawl it out in the frontlines for much longer.

Blue powerhouses, preferably those who are strong against red units

Thrasir needs a partner to cover her weakness against red units. It might be smart to include a blue magic unit as well to cover foes that are strong against physical hits. Some good example for this spot are Reinhardt, Brave Hector, or even an offensively built Peony.

Thrasir has great stats across the board. For defenses, she has decent Spd, and balanced Def and Res stats.

Altina, and Winter Altina can nail double strikes on her without the need for a Spd check so they are very deadly against Thrasir. Their access to Vantage effects also counter Killing Intent directly. Young Caeda also has native access to a Vantage effect.

Thrasir - Omnicidal Witch Only Appears as a 5 Star Hero!

Thrasir as a Source Hero

Thrasir can be used to inherit the skills Flashing Blade 4 or Panic Smoke. However, as a rare and powerful Mythic Hero, we recommend building at least one Thrasir before foddering or merging any duplicates.


How to Get Thrasir / Illustrations / Voice Actor / Quotes

Thrasir is a limited time Hero who can be pulled from a Mythic Hero Summoning event. They do not appear in regular summons.

Register as a member and get all the information you want. (It's free!)
Login
Opinions about an article or post go here.
Opinions about an article or post
We at Game8 thank you for your support.
In order for us to make the best articles possible, share your corrections, opinions, and thoughts about "Thrasir Builds and Best IVs" with us!
When reporting a problem, please be as specific as possible in providing details such as what conditions the problem occurred under and what kind of effects it had.