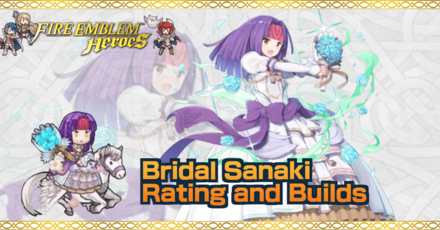 This is a ranking page for the hero Sanaki - Apostle in White from the game Fire Emblem Heroes (FEH). Read on to learn the best IVs (Individual Values), best builds (Inherit Skill), weapon refinement, stats at Lv 40, and more for Bridal Sanaki.

The best IVs for B!Sanaki are +Atk and -HP. A +Atk IV adds to her high Atk stat. This allows B!Sanaki to defeat many foes in one turn. Her HP is of less importance to her, and since her Def is a superbane, it is best to take HP as his bane instead. You can also take a +Spd IV if you prefer to rely on follow-up attacks to take out foes.

B!Sanaki is a ranged magic attacker (range = 2). Therefore, when not accounting for the Weapon Triangle, the amount of damage she deals will be equivalent to her Atk minus the foe's Res stat.

B!Sanaki is a useful flying green mage unit. Having her inherit Gronnblade+ and then combining it with the buffs from skills like Hone Fliers will make her a powerful attack phase unit.

Def/Res Link 3 grants +6 Def/Res to B!Sanaki and the ally she uses an assist skill on. Because she has access to Draw Back, she can make use of this skill without investment. You can use this skill combo to pull allies into safety or drag them into combat while simultaneously buffing their defenses.

Stronger if More Allies are Around

Nifl Frostflowers boosts unit's Atk/Spd depending on the number of allies within 2 spaces of B!Sanaki x2. This has a limit of +6 to each stat. Additionally, Atk/Res Bond 3 grants +5 Atk/Res to B!Sanaki if she is adjacent to an ally in combat.

This means having at least one ally adjacent to her and 2 other allies within 2 spaces of her grants her a total of +11 Atk, +6 Spd and + 5 Res. Always be mindful of B!Sanaki's positioning in relation to her allies to maximize her abilities!

As a flying unit, B!Sanaki takes 1.5x damage from bows and weapons effective on flying units. Be sure to keep her out of the range of archers and leave them to other units.
Heroes with Effective Skills

B!Sanaki has a low Def stat, reaching only 16 at Lv.40. If she gets attacked by a strong physical attacker, there is a high chance that she will be taken out even, if they have weapon disadvantage. Be mindful of B!Sanaki's positioning in relation to units that pose a threat to her. Pay extra attention to units that posses weapon like Brave Axe+ as they can guarantee follow-up attacks regardless of Spd, and they are sure to finish her off. Our best recommendation is to never leave her in the reach of physical units in the enemy phase.

Sanaki - Apostle in White Only Appears as a 5 Star Hero!

Bridal Sanaki as a Source Hero

B!Sanaki can be used to inherit the skill Def/Res Link 3. However, B!Sanaki is a rare flying tome user. She can fill very specific niches in various team compositions. Because of this, we recommend building and training her instead of fodderring her off.

How to Get Bridal Sanaki / Illustrations / Voice Actor / Quotes

How to Get Bridal Sanaki

Bridal Sanaki is a limited time Hero who can be pulled from a Special Heroes Summoning Event. They do not appear in regular summons.

Register as a member and get all the information you want. (It's free!)
Login
Opinions about an article or post go here.
Opinions about an article or post
We at Game8 thank you for your support.
In order for us to make the best articles possible, share your corrections, opinions, and thoughts about "Bridal Sanaki Builds and Best IVs" with us!
When reporting a problem, please be as specific as possible in providing details such as what conditions the problem occurred under and what kind of effects it had.