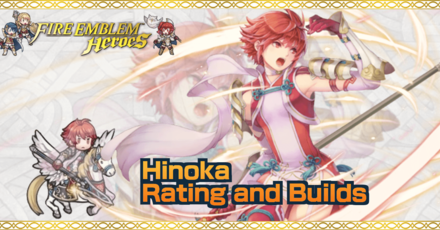 This is a ranking page for the hero Hinoka - Warrior Princess from the game Fire Emblem Heroes (FEH). Read on to learn the best IVs (Individual Values), best builds (Inherit Skill), weapon refinement, stats at Lv 40, and more for Hinoka.

The best IVs for Hinoka are +Spd and -Res. A higher Spd stat allows Hinoka to get a ton of follow-up attacks on her foes with Hinoka's Lance. It also improves her odds of prevent follow-up attacks against her. HP and Res are not much of importance to her, but since her HP is a superbane, it is best that you take a bane in Res instead.

We recommend a +Spd IV when merging Hinoka to 10. This is for the same reasons as above. At this point, she will reach a Spd of 39. This range allows her to score follow-up attacks on more foes and protect her from follow-up attacks too. You can also go for a +Atk IV if you can supplement her Spd with buffs from other units.

+Atk for a Brave Bow build

If you are planning to use a Brave Lance+ on Hinoka, be sure to get a +Atk IV as a Spd IV will be quite useless. Said weapon allows Hinoka to strike twice consecutively so even a small change in +Atk means a big change in damage!

We recommend the Special Effect Refine for Hinoka's Spear

Hinoka's Spear's special refinement effect allows her to facilitate the movement of her flying and infantry allies. This makes her very valuable not only on all-flier teams, but on mixed teams as well. This is especially important in wide maps such as Rival Domains and Grand Conquests or maps with various impassable terrain that makes it hard for infantry units to get around.

Hinoka is a close physical attacker (range = 1). Therefore, when not accounting for the Weapon Triangle, the amount of damage she deals will be equivalent to her Atk minus the foe's Def stat.

At 5★, Hinoka has access to both Brave Lance+ and Hinoka's Spear.

Both weapons are fit for Hinoka as she has a decent offensive statline. We recommend Brave Lance+ if you prefer straight up player phase damage or Hinoka's Spear if you need a more well-rounded and strategy-oriented weapon.

Hinoka's Spear has access to a special refinement effect that grants great mobility to allied flying and infantry allies. Learn more about this upgrade in the weapon refine section. As you can see, it works well with Hinoka's Spear's primary effect!

Increases the firepower of allied fliers

With her flying-exclusive C skill Hone Fliers, Hinoka can grant Atk/Spd +6 to allied fliers. This makes using her in an all-flying party very easy to take advantage of.

As a flying unit, Hinoka takes 1.5x damage from bows and weapons effective on flying units. Be sure to keep them out of the range of archers and leave them to other units.
Heroes with Effective Skills

Keep in mind that Brave Lance+ inflicts -5 Spd to Hinoka. This puts her base Spd to 27, making her susceptible to follow-up attacks from a wide range of foes. Make sure to keep her away from units that can easily take her down.

On the other hand, Hinoka's Spear grants her +4 Atk/Spd on both phases under certain conditions. It also does not inflict -5 Spd unlike Brave Lance+. They are very different weapons and using one over the other turns Hinoka into a very different unit. Check our builds section to know which skills go with both weapons!

Hinoka - Warrior Princess Only Appears as a 5 Star Hero!

Hinoka as a Source Hero

Hinoka can be used to inherit the skill Hone Fliers. This skill is quite rare and valuable and Hinoka's other skills can be inherited from more common units. If you were to fodder off Hinoka, a 5★ exclusive unit, we strongly recommend that it would only be for this skill and not for her other more accessible skills.

How to Get Hinoka / Illustrations / Voice Actor / Quotes

How to Get Hinoka

Hinoka is a Hero who can be pulled from any summon.

Register as a member and get all the information you want. (It's free!)
Login
Opinions about an article or post go here.
Opinions about an article or post
We at Game8 thank you for your support.
In order for us to make the best articles possible, share your corrections, opinions, and thoughts about "Hinoka Builds and Best IVs" with us!
When reporting a problem, please be as specific as possible in providing details such as what conditions the problem occurred under and what kind of effects it had.