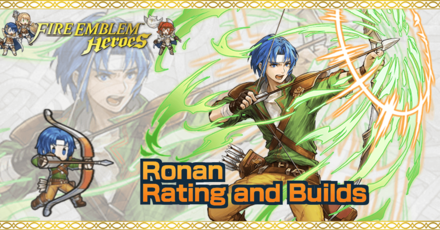 This is a ranking page for the hero Ronan - Villager of Iz from the game Fire Emblem Heroes (FEH). Read on to learn the best IVs (Individual Values), best builds (Inherit Skill), weapon refinement, stats at Lv 40, and more for Ronan.

The best IVs for Ronan are +Res and -Def. Ronan is not built to take blows from physical units to begin with so having some points off his Def would not harm his viability significantly. With that, you should maximize his Res as much as possible as his playstyle is trying to force unfair matchups on magical units.

We recommend a +Res IV when merging Ronan to 10. This is for the same reasons as above. Of course, you can also go for +Atk or +Spd IVs depending on your needs.

Ronan's weapon cannot currently be refined. This section will be updated if it becomes refineable in the future!

Ronan is a ranged physical attacker (range = 2). Therefore, when not accounting for the Weapon Triangle, the amount of damage he deals will be equivalent to his Atk minus the foe's Def stat.

Weapon skill can create a large gap in Atk stats

Ronan's weapon, Indignant Bow, grants +6 Atk to Ronan and inflicts -6 Atk to the enemy if either:

On top of the many bonuses Ronan gets from Indignant Bow and Swift Stance, he also inflicts a -6 Atk penalty to the green flier

Posseses skills that improve Spd of his team

First off, Swift Stance 3 grants Ronan +6 Spd/Res during combat and inflicts Special cooldown charge -1 to any foe that attacks him. This improves his matchups with fast mages by a ton.

Since Swift Stance 3 is an in-combat buff, it stacks with the effects of Joint Drive Spd which grants +4 Spd to Ronan and Allies if they are within 2 spaces of each other during combat. It is a useful skill to have in most team compositions as it is both easy to utilize and everyone can benefit from it. This means that Ronan can easily secure a +10 Spd buff if he meets both conditions!

You can also secure a +10 Spd buff to your allies as the buff from Joint Drive Spd, stacks with Rally Spd/Res+. This means that having Ronan on the field makes it less likely to have problems against speedy lineups.

As much as possible, avoid matchups with physical units as he is not build to take on said units to begin with.

Should you Unlock Potential for Ronan?

Ronan - Villager of Iz Only Appears as a 5 Star Hero!

Ronan as a Source Hero

Ronan can be used to inherit the skills Swift Stance 3 or Joint Drive Spd. However, Ronan is a rare blue bow unit who can fill in the niche role as an enemy phase unit so please think carefully before fodderring him off.

How to Get Ronan / Illustrations / Voice Actor / Quotes

How to Get Ronan

Ronan is a Hero who can be pulled from any summon.

Register as a member and get all the information you want. (It's free!)
Login
Opinions about an article or post go here.
Opinions about an article or post
We at Game8 thank you for your support.
In order for us to make the best articles possible, share your corrections, opinions, and thoughts about "Ronan Builds and Best IVs" with us!
When reporting a problem, please be as specific as possible in providing details such as what conditions the problem occurred under and what kind of effects it had.