This is a guide on the game mode, Mjolnir's Strike, for Fire Emblem Heroes. Read on for information on how to raise your score, which characters to use, rewards, and more!

What is Mjolnir's Strike? 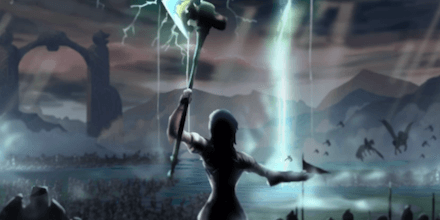 Mjolnir's Strike is a game mode where all players work together to protect Askr from the attacking forces summoned by Thorr, the God of War.

There are four phases in Mjolnir's Strike - Brace, Shield, Counter, and Rest.

If Askr's armies deal more damage than Thorr's, the defense is a success!

Tips for Raising Your Score

Calculation is the Same as Arena

Score calculation in Mjolnir's Strike is the same as how scoring works in Arena.

That means that players will need to use units with higher rarity, BST (Base Stats Total), number of merges, and premium skills in order to get their score as high as possible.

If you have units that you use in your Arena team, you can use them in Mjolnir's Strike.

A defense team is made up of 8 units, but each column only takes the score calculation of the higher scoring unit.

You can get the highest score possible for you by having 4 maximixed units and putting them in one column each, while substituting the rest with lower rarity or unbuilt units.

Use Bonus Mythic Heroes When Their Season is Up 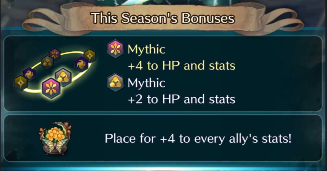 Every season, there will be bonuses if you use a Mythic Hero with the corresponding blessing in your defense team.

Do note, that only Mythic Heroes will get bonuses and not units that you have given blessings to.

In addition to increasing their stats, the Mythic Hero's score will be calculated as if they are a +10 merged unit.

By checking which Mythic Heroes will yield large and small bonuses, you can plan your team accordingly.

In the case of score bonuses, if you have a Mythic Hero who is already +10, they will be calculated as if they were +20.

Use the Bonus Structure

Placing the bonus structure as well will increase all the stats of your defense team. This in itself will not increase your score, but it is helpful for clearing the map quickly.

You Can Still Swap After Acting

You can still swap your units after they have acted. If you have Smart End set to Excl. Pair.Duo, units can still be swapped, even if all units in the team have acted.

Have Only One Dancer

You can't use dance or sing skills on one of your units if they are paired with a unit with Dance or Sing, so just have only one dancer on your defense team.

You Can Only Raise Your Score During the Shield Phase

While there are 4 phases in Mjolnir's Strike, you can only raise it during the Shield Phase.

You can, however, play through the map as many times as you like without spending stamina.

Keep playing through the map and optimizing your defense team to raise your score higher! 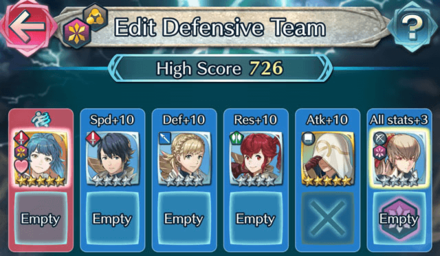 Since the 5.2.0 update, your Summoner can now join their allies on the battlefield!

Please take note that the Summoner cannot be paired with another unit and must be included in one of the slots.

Here's an example of a team made of readily available units that can be formed by beginners.

You can add any unit you wish, though it's advised that you only have one dancer in your team as they can't dance another unit who is paired with another dancer.

Also make sure to have at least one healer so they can sustain your allies!

These units can be replaced by those with higher rarities, of course, and don't forget to use the Mythic Heroes that are receiving bonuses for the season!

You Can Only Play During the Shield and Counter Phases

The only time you can play and raise your score is during the Shield Phase and the Counter Phase.

Defend Askr during the Shield Phase by defeating units in the map and hit Thorr back during the Counter Phase. 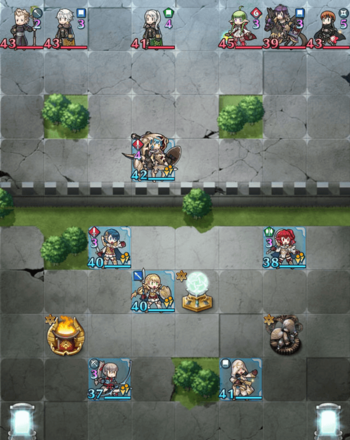 The Brace Phase is the prep period before the Shield Phase.

This is where you can set your defense team and edit the Shield Map. You can even test how your team will perform in the Test Defense feature. 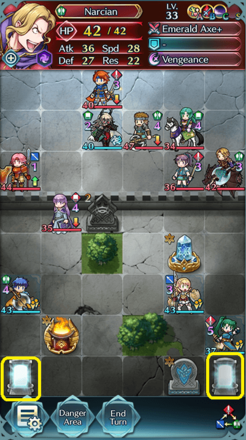 During the Shield Phase, you must protect the 2 gateways at the bottom corners of the map from Thorr's forces for 7 turns.

If an enemy unit destroys a gateway or you lose a unit, you will receive a lower score. If both gateways are destroyed, you lose the map.

Units in the red column in a defense team will be in the enemy side of the map and cannot move to their allies' side.

They can move, attack freely, and are not attacked by enemy units.

It's highly advised that the units you place in the red column are those with very high attack and can one-shot foes. 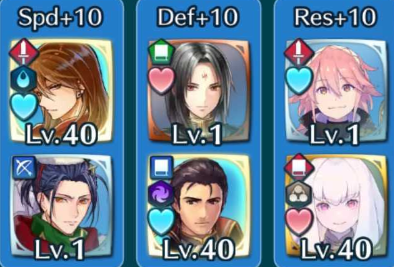 Units in the blue columns are granted bonuses depending on which stat column they are placed in.

Take note that units placed in the blue columns cannot move into the enemy side of the map, unlike the units in the red column. 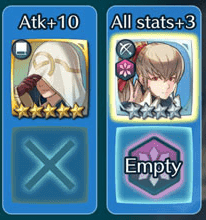 In the 5.2.0 update, two more blue columns have been added.

One column gives +10 atk to the units in it, while the other gives +3 to all stats.

The last column is reserved for Mythic Heroes who matches the current season or a unit that has the appropriate blessing. You can only put those types of units in the last column.

In order to unlock this column for use, you must slot in another Mythic Hero who appeared in ver. 5.0.0 into one of the regular slots or put them in the special slot.

Examples of Mythic Heroes that can be used in this way are Reginn and Seiros. 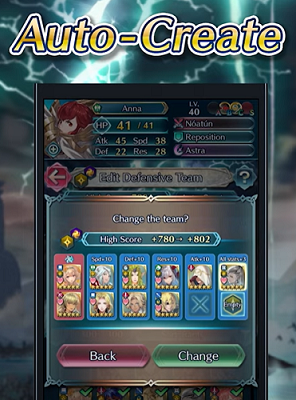 In the 5.4.2 update, you can now auto-create your defense team.

By tapping the auto-create button, the game will put together a team that will give you the highest score that you can obtain with the units that you have.

It will even put in the appropriate Mythic hero that will enable the last 2 slots! 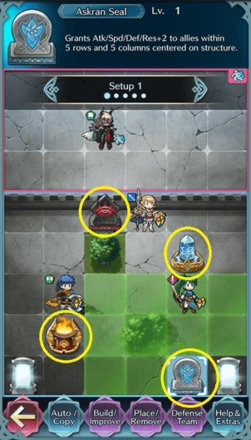 You can place up to 4 structures within your map, all with different effects.

These can be activated at any time during your turn, and after being used, a certain number of turns must pass before they can be used again.

You can improve the effects of your structures or build new ones with Midgard Gems.

Midgard Gems are given at the end of the event. The higher your score, the more gems that can be obtained. 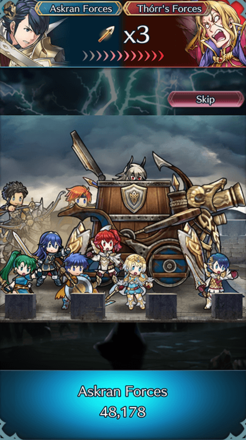 In the Counter Phase, all FEH players must attack Thorr's Forces with their Counter Arrows.

The amount of damage dealt is based on your Tier and the score you obtained during the Shield Phase.

If the Askran Forces deal more damage than Thorr's Forces, then Askr is successfully defended and wins!

When your score is lower than Thorr's Forces, the arrows' damage will be multiplied by 5 per arrow. However, the same holds true if Thorr's Forces are weaker!

If you shoot Counter Arrows at every hour, it will build into a combo bonus. This takes into account all players taking part of the event.

The more players that shoot Counter Arrows, the more the combo bonus builds!

The Rest Phase is the period that declares that the current Mjolnir's Strike season is over.

You will be receiving rewards based on your performance for the event.

There are two types of rewards at the end of Mjolnir's Strike - the Tier rewards and Askr LV rewards.

*The type of dragonflowers given will be different every season.

Askr LV. goes higher depending on if all players win or lose in Mjolnir's Strike.

Register as a member and get all the information you want. (It's free!)
Login
Opinions about an article or post go here.
Opinions about an article or post
We at Game8 thank you for your support.
In order for us to make the best articles possible, share your corrections, opinions, and thoughts about "Mjolnir's Strike Guide" with us!
When reporting a problem, please be as specific as possible in providing details such as what conditions the problem occurred under and what kind of effects it had.