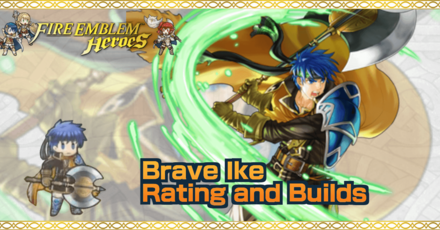 This is a ranking page for the hero Ike - Brave Mercenary from the game Fire Emblem Heroes (FEH). Read on to learn the best IVs (Individual Values), best builds (Inherit Skill), weapon refinement, stats at Lv 40, and more for Brave Ike.

B!Ike's best IVs are +Def and -HP. Ike can already get a Def buff through Steady Breath, and a Def asset to raise this stat will make this skill even more useful. HP is a lower priority, and is most likely the best flaw for B!Ike.

If you plan on merging B!Ike to +10 merges, we recommend the +Res Iv. At +10 merges with a +Res IV, Ike's Res will climb to 28, and when combined with the Special Effect of Urvan available through the Weapon Refinery, he will be able to effectively tank even magic attacks. However, if you are concerned more with damage output, +Atk is a solid option as well.

This build makes Brave Ike a beast of a tank. Take Urvan's +Eff refine, as this makes him take reduced damage from enemies, while those can can double him just makes him charge his Special sooner.

We recommend the Special Effect Refine for Urvan

We recommend refining Ike's exclusive weapon Urvan through the Weapon Refinery to gain the Special Effect upgrade. Doing so adds an additional effect, where the damage taken from the foe's first attack will be reduced by 40%. On top of this, it will make a foe's follow-up attack happen before he can counterattack, which will trigger Urvan's orignal effect and reduce the damage of the second attack onward by 80%. This upgrade is excellent as it has great synergy with Steady Breath, allowing Ike to easily tank multiple attacks and ready his special in the process.

Brave Ike is a close-range physical attacker. When the effects of the Weapon Triangle are not taken into account, the damage he deals will be equal to his Atk minus the foes's Def.

When receiving consecutive attacks from a foe, B!Ike's exclusive weapon Urvan will reduce damage by 80% from the second attack onward. This is powerful against both double attacking weapons like Brave Bow or Dire Thunder, but it is also good against skills like Desperation or Firesweep weapons, as they would all allow the foe to attack Ike twice in a row. When it comes to units that are strong against double attackers, B!Ike is outclassed by no other.

Urvan's effect triggers for consecutive attacks, so if Ike's counterattack triggers in between attacks, there will be no damage reduction.

Therefore, if you give B!Ike a Distant Counter skill, it can actually hurt him in a sense. To solve this problem, the best solution is to upgrade Urvan through the Weapon Refinery and add on the additional effect “If foe initiates combat, foe can make a follow-up attack before unit can counterattack.”

Ike's default skill Steady Breath will grant special cooldown charge+1 for each attack when the foe initiates combat. His weapon Urvan will also give him -1 count, so taking two enemy attacks will trigger a powerful attack through the use of Aether.

Damage reduction is lost if Ike's counterattack comes out early

If Ike's counterattack triggers in between a foe's consecutive attacks, there will be no damage reduction, meaning that this effect can be hard to use against close attackers. Moreover, it means he will heavy damage from dragons, so watch out. If you want to use B!Ike on your team, the Weapon Refine is a must!

B!Ike has a rather low Res stat, so he is easily disposed of by foes like Celica or Lilina, even if he can reduce their damage. Watch out for this type of foe in general, and try to avoid their range.

Brave Ike can fit in a wide variety of teams as he can mostly take care of himself.

He can be paired with those that can boost his firepower even more, like Legendary Eliwood's Bonus Doubler effect on his Ardent Durandal or any of the dancers above.

Brave Ike's Res is pretty low but he does have sustain due to Aether. Using a unit that prevents healing like Valentine's Lif due to his Fatal Smoke 3 is effective against him.

Healers that use the Dazzling-Wrathful combo in their kit can chip away at him as well, though keep in mind this does not work if Brave Ike is using the Distant Counter and Null Follow-Up 3 build.

As previously stated, Brave Ike has low Res, so you can take advantage of this by using a red tome unit and giving them the Hardy Bearing 3 Sacred Seal.

Due to the effects of the Seal, Brave Ike's damage reduction will not trigger and he will receive full damage from the second attack onwards.

Ike - Brave Mercenary Only Appears as a 5 Star Hero!

Brave Ike as a Source Hero

How to Get Resplendent Brave Ike / Illustrations / Quotes

How to Get Resplendent Brave Ike

Resplendent Brave Ike can be obtained by buying a FEH Pass. After the distribution period has ended, they can also be purchased by FEH pass subscribers.

How to Get Brave Ike / Illustrations / Voice Actor / Quotes

How to Get Brave Ike

Brave Ike is a Hero who can be pulled from any summon.

Register as a member and get all the information you want. (It's free!)
Login
Opinions about an article or post go here.
Opinions about an article or post
We at Game8 thank you for your support.
In order for us to make the best articles possible, share your corrections, opinions, and thoughts about "Brave Ike Builds and Best IVs" with us!
When reporting a problem, please be as specific as possible in providing details such as what conditions the problem occurred under and what kind of effects it had.