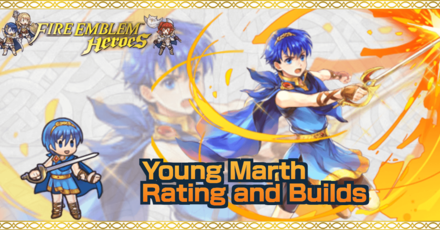 This is a ranking page for the hero Marth - Legacied Hero from the game Fire Emblem Heroes (FEH). Read on to learn the best IVs (Individual Values), best builds (Inherit Skill), weapon refinement, stats at Lv 40, and more for Young Marth.

The best IVs for Young are +Atk and -HP. A +Atk IV adds to his already high Atk stat and is perfect for him because he has access to Vantage through his weapon. This also allows Marth to defeat many foes in one turn, especially dragon units. His HP is lower priority than his other stats, and although it is a superbane, it is still the ideal bane.

Young Marth is a close physical attacker (range = 1). Therefore, when not accounting for the Weapon Triangle, the amount of damage he deals will be equivalent to his Atk minus the foe's Def stat.

Young Marth's special skill, Hero's Blood, adds 30% of his Spd to his damage. It also gives him and his allies a +4 buff to all stats 1 turn after activaing it. It is a very powerful special because it not only allows Young Marth to deal additional damage, but it also buffs his entire party.

Rapier is Strong Against Armored and Cavalry Units

The C skill Spd/Def Oath 3 grants Young Marth +5 to Spd and Def whenever he is adjacent to an ally. It is a strong buff that is very easy to activate.

His high very high Atk stat makes him susceptible to skills like Chill Atk 3 which inflicts -7 Atk to the unit with the highest Atk stat on the opposing team. This can prevent him from landing one-hit knockouts that can prove fatal to him if he is left in the danger zone. Make sure that he can either take out the unit he attacks or he can get out of the danger zone with Reposition, or Draw Back from allied units.

Young Marth's Res is somewhat low compared to his other stats. It only stands at 26 at Lv.40. He can still stand toe to toe with magic users as his Spd is decent, but be wary as he might not be able to take a 2nd hit from hard-hitting dragon units like Idunn.

Young Marth as a Source Hero

Young Marth can be used to inherit the skill Spd/Def Oath 3. However, Young Marth is a rare special hero, and we recommend that you train and build him instead, especially if you happen to pull him at 5 stars.

How to Get Young Marth / Illustrations / Voice Actor / Quotes

How to Get Young Marth

Young Marth is a limited time Hero who can be pulled from a Special Heroes Summoning Event. They do not appear in regular summons.

>>10 that was weird!! at one point I think she was suggesting that she was bi? I don't know I was rushing thru the text. I might just run it again later lol

>>9 works for the story but not the paralogues. most of those (except for the xenologues) are useless lol some are just about commander anna thirsting on xander's abdominal muscles lmao

Register as a member and get all the information you want. (It's free!)
Login
Opinions about an article or post go here.
Opinions about an article or post
We at Game8 thank you for your support.
In order for us to make the best articles possible, share your corrections, opinions, and thoughts about "Young Marth Builds and Best IVs" with us!
When reporting a problem, please be as specific as possible in providing details such as what conditions the problem occurred under and what kind of effects it had.