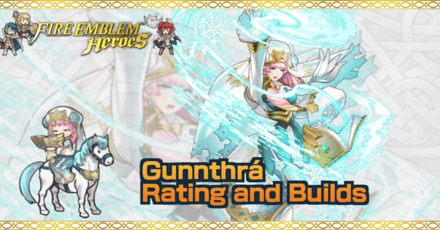 This is a ranking page for the hero Gunnthrá - Voice of Dreams from the game Fire Emblem Heroes (FEH). Read on to learn the best IVs (Individual Values), best builds (Inherit Skill), weapon refinement, stats at Lv 40, and more for Gunnthrá.

The best IVs for Gunnthrá are +Spd and -Res. A higher Spd stat allows Gunnthrá to prevent follow-up attacks and help her make follow-up attacks on her own. With a +Spd Gunnthrá, she will reach 36 Spd at Lv. 40, which can be supported with skills like Hone Cavalry for more follow-ups. Her Res is nothing special, so it is a decent bane. Afterward, you will most likely want to swap her A and C skills for something else.

We recommend a +Spd IV when merging Gunnthrá to 10. With a +Spd IV, Gunnthrá's Spd stat will reach 40 with 10 merges, allowing Gunnthra to be much more viable. If you want her to be tankier against magic users and want to place an emphasis on debuffing enemies with Res Ploy 3, you can use a +Res as a base instead.

A low budget build that utilizes Gunnthra's new skills to maximize Atk and Res. She will have balanced offenses and support ability, making her perfect for leading your team in the Arena.

Gunnthrá is a ranged magic attacker (range = 2). Therefore, when not accounting for the Weapon Triangle, the amount of damage she deals will be equivalent to her Atk minus the foe's Res stat.

Gunnthrá is a Wind-Type Legendary Hero, and when summoned, you will receive an Wind Blessing. During Wind Season, allies who appear in a team alongside Gunnthrá will gain HP+3 and Res+4 when they have been given a Wind Blessing.

In addition to granting +3 Res, Blizzard grants an Atk bonus to Gunnthrá depending on the total penalties on foe during combat. This is great as Gunnthrá has access to reliable, easy to trigger debuffs in her base kit.

Chilling Seal II inflicts a -7 Atk/Spd/Def/Res debuff on the enemy with the lowest Def stat. This will be inflicted regardless of position, so Gunnthrá's allies can take advantage of it as well. This is a great counter for glass canons who have high offensive stats but poor Def. Combined with Blizzard and Res Ploy, Gunnthrá can easily take out the enemies that are affected with Chilling Seal II.

Gunnthrá has a low Def stat. If Gunnthrá is attacked by a physical attacker, there is a high possibility that she will be taken out. Always be mindful of Gunnthrá's positioning in relation to the enemies who pose a threat to her in the enemy phase.

Gunnthrá is a Cavalry unit making her weak to skills against such units such as Ridersbane+. If attacked by a unit with Ridersbane+, Gunnthrá will take 1.5x damage. Be mindful of what skills your enemies are equipped with.

Heroes that can inflict debuffs

Since Blizzard adds Atk to Gunnthrá based on the number of penalties on the foe, it is best if you pair her with units that can inflict debuffs such as dagger units or Aversa.

Units with buffs for cavalry allies

Gunnthrá is a cavalry unit and can take advantage of exclusive buffs for that movement type. Good examples are Hone Cavalry and Goad Cavalry as both can greatly boost Gunnthrá's total stats.

Units with weapons effective on cavalry

Gunnthrá is a Cavalry unit, making her weak to skills against such units such as Gronnwolf. If attacked by a unit with this type of skill, Gunnthrá will take 1.5x damage. Units like Hoshidan Summer Micaiah and Brave Micaiah will have no problem tearing through Gunnthra.

Gunnthrá's weakness is her low Def stat, so she has a hard time dealing with characters that have high physical power Watch out for units such as Altina and Legendary Leif, whose guaranteed follow-up attacks are sure to take Gunnthrá down in one turn. Have other units deal with foes like these so that Gunnthrá can focus her firepower on other units.

Gunnthrá - Voice of Dreams Only Appears as a 5 Star Hero!

Gunnthrá as a Source Hero

Gunnthrá can be used to inherit the skills Fortress Res 3 and Res Ploy 3. However, since Gunnthrá is a powerful wind-type legendary hero that can lead your team in the Arena, we recommend training and building around her instead.

How to Get Gunnthrá / Illustrations / Voice Actor / Quotes

Gunnthrá is a limited time Hero who can be pulled from a Legendary Hero Summoning event. They do not appear in regular summons.

Register as a member and get all the information you want. (It's free!)
Login
Opinions about an article or post go here.
Opinions about an article or post
We at Game8 thank you for your support.
In order for us to make the best articles possible, share your corrections, opinions, and thoughts about "Gunnthrá Builds and Best IVs" with us!
When reporting a problem, please be as specific as possible in providing details such as what conditions the problem occurred under and what kind of effects it had.