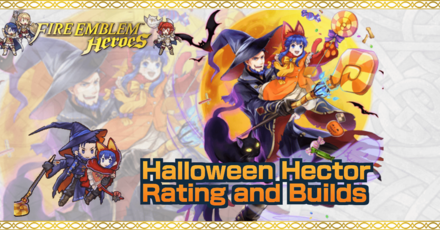 This is a ranking page for the hero Hector - Dressed-Up Duo from the game Fire Emblem Heroes (FEH). Read on to learn the best IVs (Individual Values), best builds (Inherit Skill), weapon refinement, stats at Lv 40, and more for Halloween Hector. 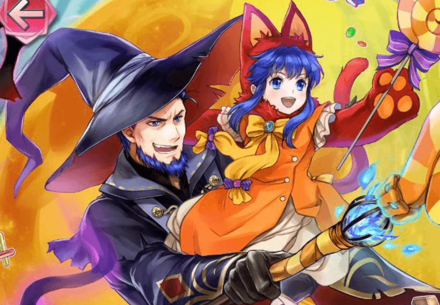 Halloween Hector's best IVs are +Atk and -Spd. With one of the top Atk stats of all heroes in the game, H!Hector can get an even bigger boost to his power with his +4 boon in Atk. Since his Spd is already very low to begin with, this is the ideal dump stat for him.

This build revolves around Bold Fighter. When initiating combat, Bold Fighter grants a guaranteed follow-up attack, allowing him to be more powerful as an attack phase unit. Conjurer Curios's effect will make it even easier to take down armored foes, so this build is very useful in Arena and Aether Raid battles with many armored foes.

This build revolves around Special Fighter. Hector's Aether count will descrease while slowing down enemy specials, and combined with Quick Riposte, he will be excellent at tanking attacks from foes. Conjurer Curios will increase H!Hector's stats on odd turns, so be sure and tank attacks primarily when this bonus is active.

This is a basic build for H!Hector. Equipping him with the seal Warding Stance will allow him to tank even more magic attacks in the enemy phase. Conjurer Curios and Odd Follow-Up are both active on the same turns, so be sure and take note of the current turn number each time.

Halloween Hector's Exclusive Weapon currently cannot be refined. This section will be updated if it becomes refinable in the future.

H!Hector is a close physical attacker (range = 1). Therefore, when not accounting for the Weapon Triangle, the amount of damage he deals will be equivalent to his Atk minus the foe's Def stat.

H!Hector's Duo Skill raises his arena score, in addition to unleashing a powerful battle effect. Duo Heroes have a Duo Skill which can be used once per map. Additionally, his Duel effect treats his stats as 185 in Arena modes, giving him a huge advantage over many other heroes.

The effect of Hector's Duo Skill is shown below

Deals 20 damage to foes within 3 columns centered on unit.
(Duo Skills can be used once per map by tapping the Duo button. Duo Skills cannot be used by units deployed using Pair Up.)

H!Hector's Duo Skill allows him to deal 20 damage to foes within 3 columns of him. As long as the foes are within these columns, damage will be dealt to them regardless of whether they are close or far, and since he can skill move after using this skill, it is extremely good.

H!Hector has the Standard Duo effect Duel. This is very useful in Arena Battles, because it will allow you to match with more powerful enemies, and the score you gain when defeating them will be even higher. Combined with his Duo Skill, he is extremely useful and easy to use in Arena Battles.

Can counterattack from any distance with Distant Counter

H!Hector has the skill Distant Counter by default, so he can counterattack against ranged foes. Since he can counterattack foes with tomes, bows, and daggers, it means taht he does excellent in the enemy phase, where he can tank most ranged attacks and then finish off the attacker with a heavy blow.

As an armored unit, H!Hector will struggle against units with armor-effective weapon skills like Armorslayer or Hammer. Be sure to check what weapons your foes are using beforehand.

Should you Unlock Potential for Halloween Hector?

Hector - Dressed-Up Duo Only Appears as a 5 Star Hero!

Halloween Hector as a Source Hero

You can use Halloween Hector to inherit both Distant Counter and Odd Follow-Up. However, as a very rare and powerful special hero, think hard about whether or not you are okay with foddering him off.

How to Get Halloween Hector / Illustrations / Voice Actor / Quotes

How to Get Halloween Hector

Halloween Hector is a limited time Hero who can be pulled from a Special Heroes Summoning Event. They do not appear in regular summons.

Register as a member and get all the information you want. (It's free!)
Login
Opinions about an article or post go here.
Opinions about an article or post
We at Game8 thank you for your support.
In order for us to make the best articles possible, share your corrections, opinions, and thoughts about "Halloween Hector Builds and Best IVs" with us!
When reporting a problem, please be as specific as possible in providing details such as what conditions the problem occurred under and what kind of effects it had.