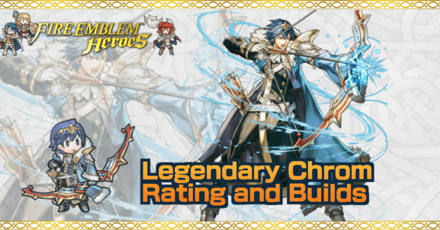 This is a ranking page for the hero Chrom - Crowned Exalt from the game Fire Emblem Heroes (FEH). Read on to learn the best IVs (Individual Values), best builds (Inherit Skill), weapon refinement, stats at Lv 40, and more for Legendary Chrom.

Legendary Chrom's best IVs are +Atk and -Spd. With a +Atk boon, he can increase his damage output, and take down more enemies. With his rather poor Spd stat, it is ideal for a flaw.

If you are merging a +10 L!Chrom, we recommend +Atk. With +10 merges and an Atk boon, Chrom's Atk stat reaches 66, which well let him take down more foes and be even more effective against fliers and armored units.

+Spd is also a good option. Since he has a superboon in Spd, +10 merges and a Spd asset will give him a Spd stat of 34, and by using other skills to buff his Spd, he will be able to avoid taking follow-up attacks from his foes.

A Special Spiral setup for Legendary Chrom. Mirror Impact and Atk/Res Oath 3 make sure Chrom's Atk is high while improving his matchups with magic units. This helps triggering Heavy Blade 3 which further speeds his Special activations.

A build that grants maximum player phase firepower. Thanks to Fury 4, Chrom can easily activate Desperation 3 and Brash Assault 3 for some one-sided matchups. Those two skills combined allows Chrom to score 2 simultaneous attacks that suppresses foes' ability to retaliate.

This is a build that focuses on making Legendary Chrom a mixed phase tank. Quick Riposte is a must-have for this build, as his poor speed makes him unable to retaliate.

L!Chrom is a ranged physical attack phase unit. Therefore, when not accounting for the Weapon Triangle, the amount of damage he deals will be equivalent to his Atk minus the foe's Def.

As a Legendary Hero, you will gain a Water Blessing when summoning L!Chrom. Additionally, being a Water type Legendary Hero means that during Water Seasons, other allies with a Water Blessing will receive HP+3 when they appear in battle with L!Chrom, and his total stats will be treated as 175. This will lead to a higher Arena Score.

L!Chrom has the exclusive weapon Randgríðr, which will neutralize any penalties on him and inflict Atk/Def -6 on a foe during combat when the foe has 100% HP.

This skill gives him a huge advantage in combat, and paired with the fact that it is effective on armored and flying foes, he has the power to OHKO a vast number of foes. 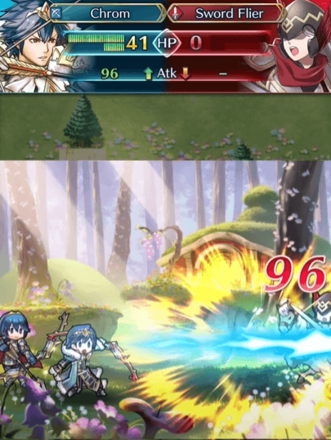 When L!Chrom uses his assist skill To Change Fate! on an ally, it will move the ally and grant them Atk+6 and allow Chrom to move again.

Reposition is easily one of the most useful assists in the game, and being able to move an ally ahead without putting himself in a bad position is a huge bonus.

Can tank close attacks thanks to Close Counter

Since L!Chrom can learn Close Counter by default, he will be able to fight back against close ranged attackers that attack him.

When combined with his B and C skills Lull Atk/Def 3 and Rouse Def/Res 3, plus the penalties inflicted by his weapon skill, he is great at reducing the enemy's damage output and tanking their attack to follow up with a strong counterattack. 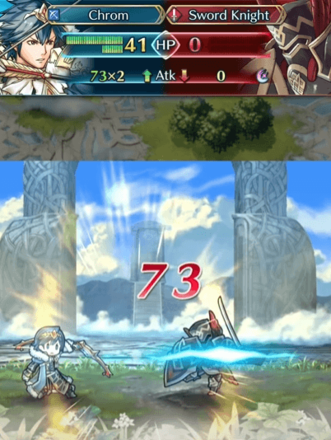 L!Chrom suffers from poor Res and Spd stats, so he is very prone to taking follow-up attacks, which can be lethal if the enemy is a magic attacker or dragon.

This can be somewhat alleviated with skills and buffs from support units, but in general, he needs to avoid taking damage from magic attackers and certain non-armored dragons.

Legendary Chrom can be used within any type of team, but he can benefit from a team supporting him. Brave Lucina can grant him buffs with her weapon, as can dancers like Peony and Legendary Azura.

Brave Ike can stand in as a tank unit, being able to take hits for Legendary Chrom, though Chrom can stand beside him as a tank as he has very low speed and won't be able to double on his own.

If you're running a Vantage 3 build for Legendary Chrom, you can run someone like Líf to tick his HP down when he attacks.

You can pair him with Altina if she's also running a Vantage build so both will have it ready if you are using Líf to damage them enough.

As you'll be scoring kills for Legendary Chrom mostly on the enemy phase, you can have him stand in as a tanky unit for your team, while you have full burst units like Lysithea to take care of other enemy units like tanks.

Legendary Chrom can be brought down by investing in a unit with Triangle Adept 3 on their A slot.

Units like Boey and Nino can stand in as mages that can use their own color advantage to potentially one-shot him.

Give them a low cooldown special like Moonbow to take him out in one go.

Tanky units like Brave Hector and Brave Ike can take hits from Legendary Chrom and then retaliate either with a Distant Counter effect or when they attack him.

Brave Ike packs a lot of damage reduction in his kit and can take advantage of his color advantage to make sure Chrom barely lays a scratch on him.

brave Hector, on the other hand, has insanely high Def and can retaliate with Ostian Counter to potentially one-shot him from a distance.

Echidna and Annette can easily out-speed Legendary Chrom to take him out in one turn due to him being a lot slower.

Chrom - Crowned Exalt Only Appears as a 5 Star Hero!

Legendary Chrom as a Source Hero

L!Chrom can be foddered off to inherit Lull Atk/Def 3 or Rouse Def/Res 3. If doing so, you should try and inherit Close Counter simultaneously.

However, as a very powerful and rare Legendary Hero, we recommend keeping and developing at least one Legendary Chrom before foddering off or merging any duplicates you pull.

How to Get Legendary Chrom / Illustrations / Voice Actor / Quotes

How to Get Legendary Chrom

Legendary Chrom is a limited time Hero who can be pulled from a Legendary Hero Summoning event. They do not appear in regular summons.

Lv. 40 Dialogue Believe in the allies who rush to your side. Even if they cannot always be there, their willingness is enough. Bonds forged on the field can shatter the shackles of despair more cleanly than any blade. Let us walk our two paths together, and forge our bonds as well, for both paths lead to one destination-peace.

Lv. 40 Dialogue When you fight for what you believe in, struggle is inevitable...but one can never know what tomorrow will bring. There are times when it feels as if you are entombed in darkness, like you will never see light again… But as we come together, our shared faith in one another can give rise to hope, which lights the way to victory. You may have more skill than I in the art of war, but I do know one thing… Fighting alone will just get you killed. ~Continued on next post

Register as a member and get all the information you want. (It's free!)
Login
Opinions about an article or post go here.
Opinions about an article or post
We at Game8 thank you for your support.
In order for us to make the best articles possible, share your corrections, opinions, and thoughts about "Legendary Chrom Builds and Best IVs" with us!
When reporting a problem, please be as specific as possible in providing details such as what conditions the problem occurred under and what kind of effects it had.