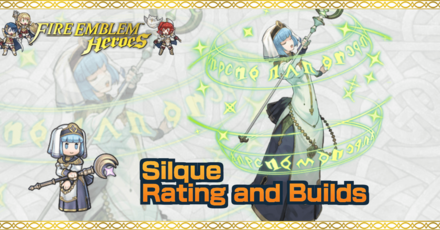 This is a ranking page for the hero Silque - Adherent of Mila from the game Fire Emblem Heroes (FEH). Read on to learn the best IVs (Individual Values), best builds (Inherit Skill), weapon refinement, stats at Lv 40, and more for Silque. 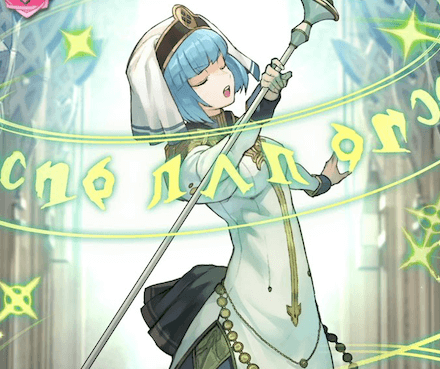 The best IVs for Silque are +Res and -Spd. A +Res Silque Spd would have 35 in both Spd and Res stats at Lv. 40. This gives her balanced defenses for physical and magical attacks. These defenses will also help her defend herself from the many counterattacks she will take. Silque's Spd is already low and it isn't really important for her, so it is safe to take Spd as a bane.

We recommend a +Res IV when merging Silque to 10. With a +Res IV, Eirika's Res stat will reach 39 with 10 merges, which makes it easier for her to surivive attacks from the enemy. You would want to increase Silque's survivability as much as possible as her support skills are very useful for your team.

Depends on your build

Silque's staff can be upgraded through the Weapon Refinery to gain the effects of either Dazzling Staff 3 or Wrathful Staff 3. Since Silque already has Dazzling Staff equipped to her B Slot by default, we normally suggest going for the Wrathful Staff upgrade, which would allow her to deal damage like other weapons.

However, if you have another skill you would like in the B slot, such as Mythic Boost, you could get the Dazzling Staff effect added to her weapon to retain its effect. For more information, see the builds section above.

Silque is a ranged magic attacker (range = 2). Therefore, when not accounting for the Weapon Triangle, the amount of damage she deals will be equivalent to her Atk minus the foe's Res stat.

If Silque attacks, Melancholy+ resets the special cooldown of the foe and all enemies within 2 squares of them. Even if the special is ready to be used, it will still return to it the maximum value, effectively cancelling it.This makes Silque a great counter to Ophelia's Missiletainn which speeds up her allies' specials.

Because of its ability to effectively prevent herores from using specials, Melancholy+ is especially helpful in Rokkr Sieges where the Rokkr's special cooldown counter is 9 and Grand Hero Battles where heroes with powerful specials are rampant.

Earthfire Balm+ grants a +6 Atk/Def buff to all allies regardless of range whenever Silque heals an ally. With a low cooldown of 1, you can easily grant your allies the +6 Atk/Def bonus most of the time.

Staff users can be hard to level up with because of their generally low damage output. Thankfully, Staff Exp 3 doubles the amount of the EXP they gain whenever Silque is alive in the current map. This is very helpful, as it theoretically halves the time required to max out a character's EXP.

Silque has very low Spd at Lv. 40 that only averages out at 23. This makes her very susceptible follow-up attacks. Thankfully, Dazzling Staff 3 prevents counterattacks, so the only thing you need to worry about are follow-up attacks when the enemy initiates combat. Keep Silque out of combat except for when she is the one to initiate it.

Should you Unlock Potential for Silque?

Silque - Adherent of Mila Only Appears as a 5 Star Hero!

Silque as a Source Hero

Silque can be used to inherit the skills Melancholy+ or Dazzling Staff 3. However, Silque is the only unit who is capable of learning Melancholy+, and she is only available at 5 star rarity. Therefore, Melancholy+ is scarce and you should choose wisely on who to pass it to.

How to Get Silque / Illustrations / Voice Actor / Quotes

How to Get Silque

Silque is a Hero who can be pulled from any summon.

Register as a member and get all the information you want. (It's free!)
Login
Opinions about an article or post go here.
Opinions about an article or post
We at Game8 thank you for your support.
In order for us to make the best articles possible, share your corrections, opinions, and thoughts about "Silque Builds and Best IVs" with us!
When reporting a problem, please be as specific as possible in providing details such as what conditions the problem occurred under and what kind of effects it had.