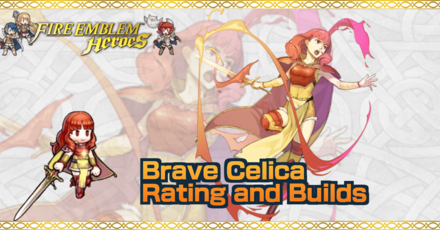 This is a ranking page for the hero Celica - Warrior Priestess from the game Fire Emblem Heroes (FEH). Read on to learn the best IVs (Individual Values), best builds (Inherit Skill), weapon refinement, stats at Lv 40, and more for Brave Celica.

The best IVs for B!Celica are +Atk and -HP. Double Lion allows B!Celica to attack twice when she is at 100% HP. This means even a small change in Atk becomes significant. Her HP is already low and it is not really important for her so it is safe to take it as a superbane.

Additionally, the HP superbane may serve her as well as it can make it easy for her to be healed to 100% HP. This makes activating Double Lion very convenient.

We recommend a +Atk IV when merging B!Celica to 10. With a +Atk IV, her Atk stat will reach 46 with 10 merges. That high of an Atk stat combined with Death Blow and Double Lion allows B!Celica take out a lot of enemies.

Through Death Blow 4, Odd Atk Wave 3, and Attack +3, B!Ceilca will gain +17 Atk on odd turns, and on top of that, she will have the ability to make consecutive attacks, making her insanely strong. Moonbow will also trigger on the 2nd hit, shutting down most foes before they even have a chance to retaliate. When her HP gets too low, use Reciprocal Aid or a recovery assist to get that HP back up and make more consecutive attacks.

We recommend the Special Effect Refine for Royal Sword

This upgrade grants so much utility to Brave Celica and improves her overall performance in any kind of situation. The trigger condition is pretty simple and easy to meet, but it gives +5 to all stats, grants special cooldown count -1 and restores 7 HP!

The heal counters Double Lion's negative effect, so you will be able to activate it again without the help of other allies. The special cooldown count reduction cannot be overlooked as well as Celica has access to an amazing special in Galeforce.

This upgrade is designed to synergize well with Brave Celica and it does not disappoint. With that said, get this upgrade as soon as possible if Brave Celica is one of your main units!

Brave Celica is a close physical attacker (range = 1). Therefore, when not accounting for the Weapon Triangle, the amount of damage she deals will be equivalent to her Atk minus the foe's Def stat.

Double Lion allows B!Celica to attack twice if she is at 100% HP. However, it damages her by 1 after the double attack so even if she takes out the enemy, she is ineligible for the double attack thereafter. Two attacks from B!Celica allows her to take out alot of units easily. This is why we recommend pairing her up with automatic healers such as the ones listed below.

These units have passive heals as long as you are within 2 spaces of them. Since the damage from Double Lion is only 1HP, you can easily heal back up to 100% HP again.

B!Celica has Death Blow 4, which will give her Atk+8 when initiating combat. This significantly increases her offensive capability, as it perfectly synergizes with her Double Lion B skill mentioned above. This effectively doubles the power of Death Blow 4, but take note that it only works when B!Celica engages combat. It has no effect when she is attacked by foes.

B!Celica's weapon, Royal Sword, grants special cooldown +1 per unit's attack whenever B!Celica is within 2 spaces of an ally. This is a powerful skill and it has an easier trigger requirement compared to Heavy Blade.

It also has access to a special effect refine that extremely boosts Brave Celica's kit making her a more efficient and powerful unit.

B!Celica's B skill, Double Lion allows her to attack twice if she is at 100% HP and she initiates combat. However, it deals damage to her after combat making it impossible to perform another double attack unless she has healers on her side.

Should you Unlock Potential for Brave Celica?

Celica - Warrior Priestess Only Appears as a 5 Star Hero!

Brave Celica as a Source Hero

Brave Celica can be used to inherit the skill Death Blow 4. However, Brave Celica is a powerful unit. We recommend training and investing in her instead of fodderring her off.

How to Get Brave Celica / Illustrations / Voice Actor / Quotes

How to Get Brave Celica

Brave Celica is a Hero who can be pulled from any summon.

Register as a member and get all the information you want. (It's free!)
Login
Opinions about an article or post go here.
Opinions about an article or post
We at Game8 thank you for your support.
In order for us to make the best articles possible, share your corrections, opinions, and thoughts about "Brave Celica Builds and Best IVs" with us!
When reporting a problem, please be as specific as possible in providing details such as what conditions the problem occurred under and what kind of effects it had.