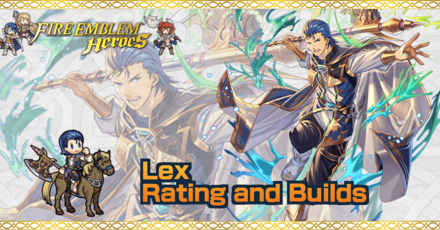 This is a ranking page for the hero Lex - Young Blade from the game Fire Emblem Heroes (FEH). Read on to learn the best IVs (Individual Values), best builds (Inherit Skill), weapon refinement, stats at Lv 40, and more for Lex.

The best IVs for Lex are +Atk and -Res. Since Goddess Axe guarantees him a second strike in both phases, Lex is better off getting +Atk to maximize his offenses. Unlike other Brave weapon users, Lex's Spd is not entirely useless as it can protect him from follow-up attacks because it is not in abysmally low levels. You are better off taking a bane in -Res instead as he is not designed to take attacks from magic units any way.

We recommend a +Atk IV when merging Lex to 10. This is for the same reasons as above. With +10 merges, Lex's Atk stat will reach 54 with the weapon skill. Without a doubt, he will hit hard especially when the strengths Goddess Axe is taken advantage of.

A more expensive variant of a Vantage setup. Instead of Atk/Def Push 3, you pick up Distant Counter which will allow Lex to land 2 strikes on attacking raagned units as well! Since you lose some offensive power by taking out Atk/Def Push, you should go for Joint Hone Atk instead and leave it to your support units to handle debuffs.

This kit simply adds Bonfire, Vantage replaces Axe Experience 3 with Atk Smoke 3, and slaps a Fierce Stance 3 Sacred Seal. All additions are fairly cheap, but are very efficient in improving Lex's viability in both phases of the game.

Lex's weapon cannot currently be refined. This section will be updated if it becomes refineable in the future!

Lex is a close physical attacker (range = 1). Therefore, when not accounting for the Weapon Triangle, the amount of damage he deals will be equivalent to his Atk minus the foe's Def stat.

Good Bulk Due to Self-Buffs

Goddess Axe Allows Him to Double

This results in 4 attacks if he is able to win the Spd check or if he has a Breaker skill like Lancebreaker 3.

Lex's Res only sits at 14 at Lv.40 when Goddess Axe is equipped. This makes it easy for magic users to take him out. Be mindful of Lex's positioning in relation to magical units that can easily take him out. Make use of his great mobility to do so!

There are many cavalry-effective weapons in the game, so be careful and check which ones your enemy units are using!

Should you Unlock Potential for Lex?

Lex as a Source Hero

Lex can be used to inherit the skills Atk/Def Push 3 or Axe Experience 3. Reposition is a standard useful skill too, but you are better off getting it from other cheaper and more available heroes.

How to Get Lex / Illustrations / Voice Actor / Quotes

How to Get Lex

Lex is a Hero who can be pulled from any summon.

>>1 We have fixed this oversight. Thank you for pointing it out! :)

Register as a member and get all the information you want. (It's free!)
Login
Opinions about an article or post go here.
Opinions about an article or post
We at Game8 thank you for your support.
In order for us to make the best articles possible, share your corrections, opinions, and thoughts about "Lex Builds and Best IVs" with us!
When reporting a problem, please be as specific as possible in providing details such as what conditions the problem occurred under and what kind of effects it had.