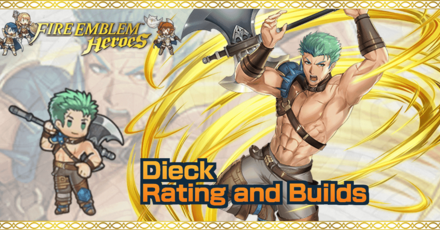 This is a ranking page for the hero Dieck - Wounded Tiger from the game Fire Emblem Heroes (FEH). Read on to learn the best IVs (Individual Values), best builds (Inherit Skill), weapon refinement, stats at Lv 40, and more for Dieck.

The best IVs for Dieck are +Atk and -Def. Since Dieck can guarantee follow-up attacks through Tiger-Roar Axe, he does not heavily rely on Spd. Because of this, it is better to directly increase his damage by taking a +Atk IV. It is also a superboon so you should take advantage of it as much as possible.

For the preferred bane, you can go for a -Def IV as Dieck can afford a bane here as it is pretty high! It will balance his Def and Res stats which is ideal for a frontline unit like him. Of course this stat should not be neglected so we recommend getting that merge as soon as possible.

We recommend a +Atk IV when merging Dieck to 10. This is for the same reasons as above! If you max him out, Dieck will be able to take out a large range of enemies if he is able to score the follow-up attack from Tiger-Roar Axe.

This is a minimal investment build for Dieck. The idea is to utilize Tiger-Roar Axe's guaranteed follow-up attack by slapping a Death Blow 3 Sacred Seal onto him to greatly increase his player phase firepower.

Dieck's weapon cannot currently be refined. This section will be updated if it becomes refineable in the future!

Dieck is a close physical attacker (range = 1). Therefore, when not accounting for the Weapon Triangle, the amount of damage he deals will be equivalent to his Atk minus the foe's Def stat.

Weapon skill grants an all-stat buff and can allow him to score guaranteed follow-up attacks!

Also, if he meets either of the conditions above and the enemy is at 100% HP, he makes a guaranteed follow-up attack. Make sure to prioritize

Close Def 4 grants +8 Def/Res is Sigurd is attacked by a sword, axe, lance or dragonstone unit. This makes him a decent tank unit in the enemy phase if all enemies are of said unit types. It patches his weakness of having a relatively low Res against dragonstone units. This skill does not affect tome and staff users, so be wary of these unit types. In addition, it also neutralizes foe's bonuses from Rally, Fortify, etc. during combat.

Dieck's C Skill Threat Atk/Def 3 will give him Atk/Def+5 and inflict Atk/Def-5 on foes within two spaces at the start of a turn. This is an extremely strong buff skill, but just be wary that the effect will only trigger if Dieck starts within two spaces of a foe when the turn starts.

This can be seen as a +10 Atk/Def bonus when fighting physical foes. Couple this with Close Def 4 if the enemy is a melee physical unit and you will most likely win the matchup! Feel free to throw Dieck into danger zones that cover lots of melee physical units as he has the potential to sweep those spots.

His whole kit makes him strong in both phases! Make sure that Dieck is mostly in the front line as this is where he shines most.

Should you Unlock Potential for Dieck?

Dieck - Wounded Tiger Only Appears as a 5 Star Hero!

Dieck as a Source Hero

Dieck can be used to inherit the skills Close Def 4 or Null Follow-Up 3. However, Dieck is a powerful hero that can provide lots of firepower for your lineups. Please think carefully before fodderring him off.

How to Get Dieck / Illustrations / Voice Actor / Quotes

Dieck is a Hero who can be pulled from any summon.

Register as a member and get all the information you want. (It's free!)
Login
Opinions about an article or post go here.
Opinions about an article or post
We at Game8 thank you for your support.
In order for us to make the best articles possible, share your corrections, opinions, and thoughts about "Dieck Builds and Best IVs" with us!
When reporting a problem, please be as specific as possible in providing details such as what conditions the problem occurred under and what kind of effects it had.