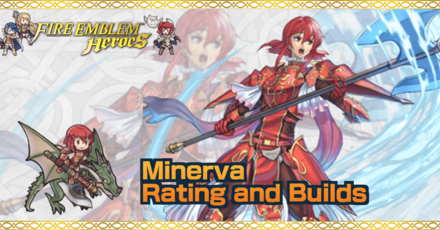 This is a ranking page for the hero Minerva - Red Dragoon from the game Fire Emblem Heroes (FEH). Read on to learn the best IVs (Individual Values), best builds (Inherit Skill), weapon refinement, stats at Lv 40, and more for Minerva.

The best IVs for Minerva are +Spd and -Res. 5 star Lv. 40 Minerva with Life and Death 3 has a Spd stat of 38. While pretty good, it could certainly be better. A Spd IV allows Minerva to secure many more follow-up attacks on her own, boosting both her offensive and survivability capabilities. Her Res stat is already low and it isn't really important for her especially in Life and Death 3 builds, so it is okay to take it as a bane.

We recommend a +Spd IV when merging Minerva to 10. With a +Spd IV, Minerva's Spd stat will reach 40 with 10 merges, which makes it even easier for Minerva to land many follow-up attacks. She can reach 45 Spd when Life and Death 3 is used which is pretty high. However, if you plan to use a Distant Counter build, we recommend using a +Res Minerva as a base so you can tank more attacks.

We recommend the Special Effect Refine for Hauteclere

Hauteclere's special effect accelerates Minerva's special trigger by 1 and it gives a +10 damage bonus whenever the special activates. We recommend getting it as it is pretty easy to utilize, and the effects are useful for Minerva's role as a player phase flying ace.

Minerva is a close physical attacker (range = 1). Therefore, when not accounting for the Weapon Triangle, the amount of damage she deals will be equivalent to her Atk minus the foe's Def stat.

Hauteclere's special effect accelerates Minerva's special trigger by -1 and it gives a +10 damage bonus whenever the special activates. Because of the effect, Minerva can activate and strengthen low trigger specials like the previously mentioned Moonbow and Glimmer.

Life and Death 3 provides Minerva with +5 Atk/Spd, but also gives her -5 Def/Res. This makes her a very powerful full-on offensive unit but it diminishes her ability to tank damage. Although opting for skills like Close Def 3 grants her more survivability and Quick Riposte 3 allows her to make follow-up attacks even without the extra Spd from Life and Death 3, base Minerva is a unit that excels in offense and offense alone.

As a flying unit, Minerva takes 1.5x damage from bows and weapons effective on flying units. Be sure to keep her out of the range of archers and leave these foes to your other units.

Minerva has a low Res stat. If Eirika is attacked by a magic user, there is a high possibility that she will be taken out, especially when equipped with Life and Death 3. Always be mindful of Minerva's positioning in relation to the enemies who pose a threat to her in the enemy phase regardless if she can counterattack or not.

Should you Unlock Potential for Minerva?

Minerva - Red Dragoon Only Appears as a 5 Star Hero!

Minerva as a Source Hero

Minerva can be used to inherit the skill Life and Death 3 and Ward Fliers. These can be obtained simulataneously by first inheriting the prerequisite skills from another unit.

How to Get Resplendent Minerva / Illustrations / Quotes

How to Get Resplendent Minerva

Resplendent Minerva can be obtained by buying a FEH Pass. After the distribution period has ended, they can also be purchased by FEH pass subscribers.

How to Get Minerva / Illustrations / Voice Actor / Quotes

How to Get Minerva

Minerva is a Hero who can be pulled from any summon.

Register as a member and get all the information you want. (It's free!)
Login
Opinions about an article or post go here.
Opinions about an article or post
We at Game8 thank you for your support.
In order for us to make the best articles possible, share your corrections, opinions, and thoughts about "Minerva Builds and Best IVs" with us!
When reporting a problem, please be as specific as possible in providing details such as what conditions the problem occurred under and what kind of effects it had.