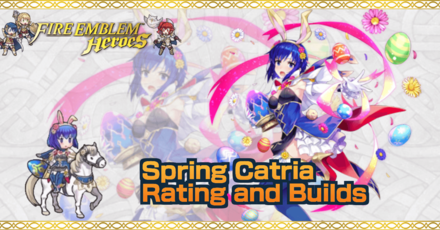 This is a ranking page for the hero Catria - Spring Whitewing from the game Fire Emblem Heroes (FEH). Read on to learn the best IVs (Individual Values), best builds (Inherit Skill), weapon refinement, stats at Lv 40, and more for Spring Catria.

The best IVs for Spring Catria are +Spd and -HP. A higher Spd stat allows Spring Catria to get a ton of follow-up attacks on her foes. It also protects her from hostile follow-up attacks. Her HP of is less importance and thus safe to be taken as a bane. Her Def is of less importance too, but it is a superbane so you are better off taking a -HP IV.

We recommend a +Spd IV when merging Spring Catria to 10. This is for the same reasons as above. At max merges, she will reach 42 Spd which allows her to score lots of follow-up attacks especially when backed by support units. If you prefer raw damage, you can go for a +Atk IV instead.

With the active buffs from ally skills such as Goad Cavalry or Hone Cavalry, S!Catria will be very effective against most red and blue enemies. Even if you cannot manage to get a Blárblade+, inheriting Blárblade from a 3-star Odin should give her plenty of power.

This is a low cost, low investment build for Spring Catria. Use Threaten Spd in the S or C slot, and give her Darting Blow in the A slot so that combined with Chill Res, she will have the power to take down many foes.

Spring Catria's Exclusive Weapon currently cannot be refined. This section will be updated if it becomes refinable in the future.

Spring Catria is a ranged magic attacker (range = 2). Therefore, when not accounting for the Weapon Triangle, the amount of damage she deals will be equivalent to her Atk minus the foe's Res stat.

Inflict a huge Atk/Def debuff on a foe with low Res!

Spring Catria's weapon, Huginn's Egg, inflicts -5 Atk/Def to the foe with the lowest Res at every start of the turn. It can be said that it is a direct counter to units like Zelgius and Winter Zephiel. Both units have a very low Res stat and they depend on both Atk/Def stats to be effective.

A quirk of Huginn's Egg is that it works regardless of Catria's position in relation to the affected foe. Another thing to take note of is that this debuff will only come to play if Catria is at least at 50% HP or above.

Chill Res 3 inflicts -7 Res on the enemy unit with the highest Res This is very important, as it makes one of the bulkiest enemies a bit more manageable. Like Huginn's Egg, Chill Res 3 affects enemies regardless of Spring Catria's position. A -7 Res debuff that is always active cannot be underestimated.

Because of how Huginn's Egg and Chill Res 3 are triggered, they will most likely affect 2 different units. This allows Spring Catria to contribute to her team even if she is not in the frontline! Her presence alone contributes largely by weakening the enemy team.

Spring Catria takes 1.5x damage from cavalry-effective weapons like Ridersbane, and one blow from this type of weapon is sure to take her down. Make sure you know what weapons you are up against before hopping too far into the line of battle!

Should you Unlock Potential for Spring Catria?

Catria - Spring Whitewing Only Appears as a 5 Star Hero!

Spring Catria as a Source Hero

Spring Catria can be used to inherit the skill Chill Res 3. However, Spring Catria is a special hero that can only be obtained from special banners. Please think carefully before fodderring her off.

How to Get Spring Catria / Illustrations / Voice Actor / Quotes

How to Get Spring Catria

Spring Catria is a limited time Hero who can be pulled from a Special Heroes Summoning Event. They do not appear in regular summons.

Register as a member and get all the information you want. (It's free!)
Login
Opinions about an article or post go here.
Opinions about an article or post
We at Game8 thank you for your support.
In order for us to make the best articles possible, share your corrections, opinions, and thoughts about "Spring Catria Builds and Best IVs" with us!
When reporting a problem, please be as specific as possible in providing details such as what conditions the problem occurred under and what kind of effects it had.