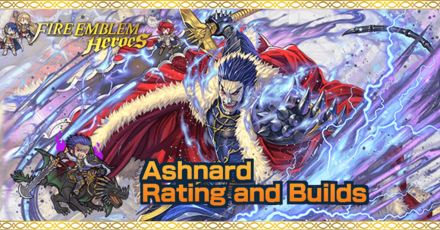 This is a ranking page for the hero Ashnard - Mad King from the game Fire Emblem Heroes (FEH). Read on to learn the best IVs (Individual Values), best builds (Inherit Skill), weapon refinement, stats at Lv 40, and more for Ashnard.

As a hero obtainable only through Grand Hero Battle, Ashnard has no access to IVs. This means that this unit will always have base stats when obtained, with no flaws or assets.

Note: We are currently working to find out the best skills for this Hero to inherit.

Ashnard's weapon cannot currently be refined. This section will be updated if it becomes refineable in the future!

Ashnard is a close physical attacker (range = 1). Therefore, when not accounting for the Weapon Triangle, the amount of damage he deals will be equivalent to his Atk minus the foe's Def stat.

Gurgurant has the effect of inflicting -5 Atk/Def on foes within 2 spaces after combat. This allows Ashnard to become both a powerful attacker, and a good supporting unit as it can boost your allies damage too!

Gurgurant neutralizes skills that make attacks effective on fliers. On top of that, Ashnard also has Distant Def 3, so the damage of bow attacks are reduced even further. Combined with his naturally high Def and Res stats, he can be pretty good at tanking ranged attacks, especially from physical attackers. For all-flying teams, he can even fill out a very niche role in that he can tank and take out bow units for your team similar to Young Minerva and Michalis.

Ashnard is susceptible to follow-up attacks as he has low Spd. Be careful when dealing with dragon units as Distant Def cannot reduce damage from this type of foe, so a speedy dragon can take him out pretty easily.

Should you Unlock Potential for Ashnard?

Ashnard as a Source Hero

Ashnard can be used to inherit the skill Distant Def 3. However, Ashnard is a powerful unit that is distributed in Grand Hero Battles. This means that the number of Ashnards you can get is limited. Think carefully before fodderring him off.

How to Get Ashnard / Illustrations / Voice Actor / Quotes

Ashnard is a Hero who, for a limited time, can be obtained through completing a Grand Hero Battle for the first time. They do not appear in regular summons. After the event has ended, they can be obtained by using Heroic Grails.

Register as a member and get all the information you want. (It's free!)
Login
Opinions about an article or post go here.
Opinions about an article or post
We at Game8 thank you for your support.
In order for us to make the best articles possible, share your corrections, opinions, and thoughts about "Ashnard Rating and Best Builds" with us!
When reporting a problem, please be as specific as possible in providing details such as what conditions the problem occurred under and what kind of effects it had.