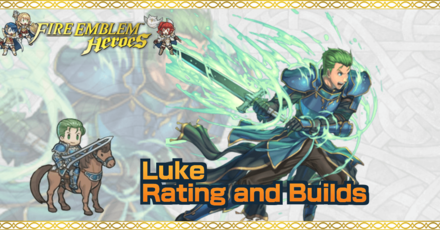 This is a ranking page for the hero Luke - Rowdy Squire from the game Fire Emblem Heroes (FEH). Read on to learn the best IVs (Individual Values), best builds (Inherit Skill), weapon refinement, stats at Lv 40, and more for Luke.

The best IVs for Luke are +Atk and -Res. Luke relies solely on Atk to deal damage as he can already nail two attacks into the opponent with either Brave Sword or Rowdy Sword. His Res is of less importance so it is safe to take it as a bane.

Rowdy Sword is granted a very straightforward effect upon special refinement. It grants Luke +6 Atk/Def if bonuses granted by Rally or Hone are not active on the foe. The Atk bonus greatly improves the damage dealt by Rowdy Sword's 2 attacks. Make use of skills like Dull Close 3 to disable any Rally or Hone bonus to make better use of this buff!

Luke is a close physical attacker (range = 1). Therefore, when not accounting for the Weapon Triangle, the amount of damage he deals will be equivalent to his Atk minus the foe's Def stat.

Rowdy Sword hits harder than Brave Sword+ and it is basically a direct upgrade from it. It also has access to a special refinement effect which is discussed in detail here!

Buffs Atk if HP is Higher than Foe's

Fire Boost 3 grants +6 Atk if Luke's HP ≥ foe’s HP+3. Unlike Death Blow 3, it also activates when Luke performs counterattacks, making it a goood enemy phase skill as well. This works well with Rowdy Sword as that will provide a total of +12 Atk worth of damage in one initiated attack.

Panic Ploy 3 converts units' bonuses in Luke's cardinal direction into penalties, meaning all positive stat boosts turn into negative stat reductions. This effects all units in spaces above, below, to the right, or to the left of Luke. With his fairly high HP, this is a powerful skill for Luke, since it is easy for him to debuff many enemy units with lower HP.

The HP requirement also makes a 5★ Luke a good candidate for Summoner Support as he greatly benefits from the +5 HP. Not to mention, this helps triggering Fire Boost 3 as well!

Luke has low Spd. He will be taken out by many enemies if ever he is attacked. Make use of his high mobility to pick the right targets and prolong his presence in the battlefield!

Luke's Res only sits at 20 at Lv.40. This makes it easy for magic users to take him out. Be mindful of Luke's positioning in relation to magical units that can easily take him out.

Should you Unlock Potential for Luke?

Luke - Rowdy Squire Only Appears as a 5 Star Hero!

Luke as a Source Hero

Luke can be used to inherit the skill Panic Ploy 3. Take note that Panic Ploy is available as a Sacred Seal. Think carefully before fodderring him off or before turning him into a Combat Manual.

How to Get Luke / Illustrations / Voice Actor / Quotes

How to Get Luke

Luke is a Hero who can be pulled from any summon.

Register as a member and get all the information you want. (It's free!)
Login
Opinions about an article or post go here.
Opinions about an article or post
We at Game8 thank you for your support.
In order for us to make the best articles possible, share your corrections, opinions, and thoughts about "Luke Builds and Best IVs" with us!
When reporting a problem, please be as specific as possible in providing details such as what conditions the problem occurred under and what kind of effects it had.