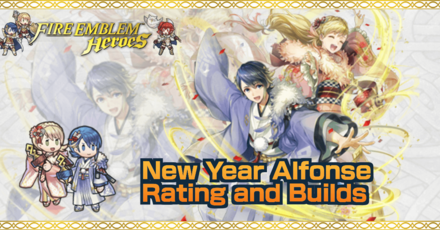 This is a ranking page for the hero Alfonse - Askran Duo from the game Fire Emblem Heroes (FEH). Read on to learn the best IVs (Individual Values), best builds (Inherit Skill), weapon refinement, stats at Lv 40, and more for New Year Alfonse. 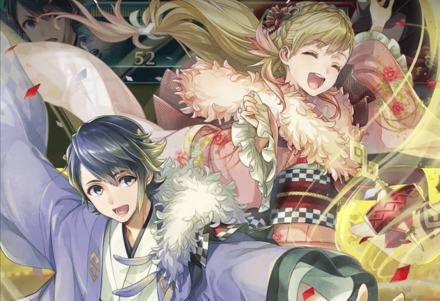 NY! Alfonse's best IVs are +Def and -Spd. With his superboon in Def, Alfonse gains Def+4, further increasing his tanking ability. With his low Spd stat, it is the ideal dump stat.

Since Atk is also a superboon, +Atk is a good IV as well. Since the power of each attack will increase significantly, it will become even easier to take down foes.

When merging to NY! Alfonse to +10, +Atk is the best IV. With a +10 merge, superboon in Atk, and his exclusive weapon, Alfonse's Atk reaches 60, allowing him to take down almost any enemy. However, if you really want to focus on tanking, +Def is also a good IV here.

This is a Raven build for NY! Alfonse. With Null C-Disrupt, Alfonse will be able to safely counterattack and take down foes such as Veronica. In particular, this build will be strong against red and colorless foes.

This is a low cost build for NY! Alfonse. With Def/Res Bond as a seal, Alfonse's ability to tank enemy attacks increases. Using the duo skill on the first turn will allow his special Open the Future ready to use, which will trigger the effect of Imbued Koma.

NY! Alfonse's exclusive weapon cannot currently be refined! This section will be updated if it becomes refineable in the future.

NY! Alfonse is a ranged magic attacker (range = 2). Therefore, when not accounting for the Weapon Triangle, the amount of damage he deals will be equivalent to his Atk minus the foe's Res stat.

NY! Alfonse's Duo Skill raises his arena score, in addition to unleashing a powerful battle effect. Duo Heroes have a Duo Skill which can be used once per map. Additionally, his Duel effect treats his stats as 185 in Arena modes, giving him a huge advantage over many other heroes.

The effect of Alfonse's Duo Skill is shown below 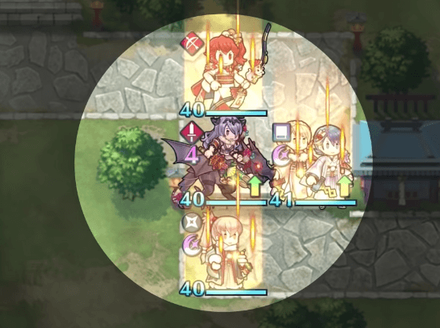 Grants Special cooldown count-2 to unit and infantry allies within 3 rows and 3 columns centered on unit.
(Duo Skills can be used once per map by tapping the Duo button. Duo Skills cannot be used by units deployed using Pair Up.)

Special is ready to trigger from the first turn

NY! Alfonse's special Open the Future has the effects of Bonfire, but also restores HP. Additionally, his exclusive weapon Imbued Koma gives cooldown -1, so by activating his Duo Skill, his Special will be ready to use from the very first turn.

Exclusive special that can be triggered in succession

Special Spiral is a powerful skill that gives special cooldown count -2 after triggering a special. This skill will allow him to use his powerful special Open the Future in succession, making it a great addition to his skillset.

Bonus to all stats when special is ready

NY! Alfonse's exclusve weapon Imbued Koma grants special cooldown -1, gives a +5 bonus to all stats and prevents enemy follow-ups when his special is ready. This is very synergetic with Special Spiral, and since it also blocks guaranteed follow-ups, Duo Alfonse is both a powerful attacker and defender.

Can counterattack at any range

Weak when Special is not ready

The effect of Imbued Koma that grants +5 to all stats and prevents enemy follow-up attacks are only active when Alfonse's special is ready. When his special cannot trigger, Alfonse's low Spd stat means he will take a follow-up attack and be KO'd. Be sure that Alfonse is ready to trigger a special before going into combat to avoid getting wiped out.

Should you Unlock Potential for New Year Alfonse?

Alfonse - Askran Duo Only Appears as a 5 Star Hero!

NY! Alfonse can be used to inherit both Special Spiral and Close Counter. However, as he is a very powerful and rare Special Hero, we recommend building one before foddering any extras off.

How to Get New Year Alfonse / Illustrations / Voice Actor / Quotes

How to Get New Year Alfonse

New Year Alfonse is a limited time Hero who can be pulled from a Special Heroes Summoning Event. They do not appear in regular summons.

Register as a member and get all the information you want. (It's free!)
Login
Opinions about an article or post go here.
Opinions about an article or post
We at Game8 thank you for your support.
In order for us to make the best articles possible, share your corrections, opinions, and thoughts about "New Year Alfonse Builds and Best IVs" with us!
When reporting a problem, please be as specific as possible in providing details such as what conditions the problem occurred under and what kind of effects it had.