How Does The Arena Work? Arena Guide | Fire Emblem Heroes

This is a guide to Arena Duels in Fire Emblem Heroes (FEH). If you would like to know about the rules of Arena battles, how your Arena Score is calculated, or how to play this mode, please read on.

What is the Arena?

A Ranked Battle where you earn Feathers and Orbs

The Arena is a ranked battle mode in FEH where you battle against other player's Defence Teams that are controlled by AI, competing with players from all countries for a high score. Based off of your score ranking, you will be able to earn rewards such as hero feathers and orbs.

In the Arena, you will use a special type of Stamina, known as Dueling Swords. When you have three dueling swords at the top of the Battle screen, you have the max amount of swords. There are three ways to recover your swords (below).

How to Recover Dueling Swords

The Arena has intervals known as seasons, which each last for a week. At the end of each season, your score for that season is calculated, and your rewards and tier placement are determined by how well you did.

You can obtain your rewards as soon as the the next Arena season begins. You must claim your rewards within a week or else you will lose them. 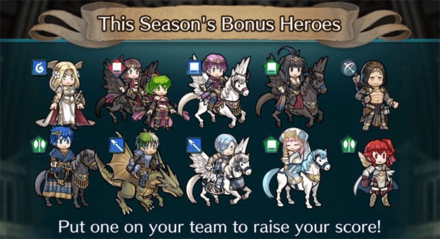 Your Arena Score is calculated based on how powerful your opponent's units are. The following factors determine how strong your opponents are.

The points you receive are based on opponent difficulty

When matching with an opponent, you must select either Beginner, Intermediate, and Advanced.

A higher difficulty will result in both units that have better stats and skills, and better AI. Always choose Advanced for the best score.

Since matchmaking is based around your party's strength, you should in theory be able to take on any team you are matched with.

A Dueling Sword is used once you select your enemy, and surrendering will cause you to lose it.

You are given a score from each battle, and winning consecutive battles will cause your score to increase.

When you win five consecutive Arena Battles, that score is added up, and it will become your score for that season, until you can replace it with a higher one.

Additionally, you are given a reward for your first time clearing battles consecutively (one for each of the five battles).

When you use one of the season's Bonus Heroes, you will be able to receive three different types of bonuses.

Bonus Heroes in the Arena will receive HP+10 and Atk/Def/Res+4.

However, these bonus stats will not contribute to your score, and only the Bonus Hero receives them.

Increased Score for No Deaths!

You will get the largest obtainable score if you complete a five battle run without any team members dying. You will lose more and more of your score based on the amount of allies who died in battle.

In Arena Battles, one designated party of yours will be controlled by AI and battle real players as well. Therefore, other than setting the team, you do not have to do anything.

From Edit Allies, you can set a defense team by clicking on the bottom left button.

The main reward for doing Arena Battles is feathers, although you will receive a few orbs and Trait Fruits as well.

This is one of the best ways to collect a ton of feathers, so aim for the highest rank you can. There are three types of awards in Arena Battles, which are rewarded at the end of each season.

In the FEH Arena, your rank is known as a Tier. This will determine the type of rewards you are elligible to earn each season.

When you are among one of the higher scoring percentiles of a tier, you will be promoted to a higher tier. However, if you score is on the lower end of the tier, you will instead be demoted.

The percentiles for being promoted or demoted within each tier as shown below. The most tiers you can move up at once is three, and you can only move down a tier from the 8th Tier and above.

Aim for 5 victories in a row!

In the Arena, the points you earn for consecutive battles are cumulative, and a winstreak results in a point bonus. The first thing you should do is just aim to complete the five battles and earn the chain rewards. From there, you can do try another run if you wish to aim for a higher score.

If you are wondering which units are currently powerful in the Arena, be sure to check our Tier Lists, which can be found below!

Post (0 Comments)
Opinions about an article or post go here.
Opinions about an article or post
We at Game8 thank you for your support.
In order for us to make the best articles possible, share your corrections, opinions, and thoughts about "How Does The Arena Work? Arena Guide" with us!
When reporting a problem, please be as specific as possible in providing details such as what conditions the problem occurred under and what kind of effects it had.