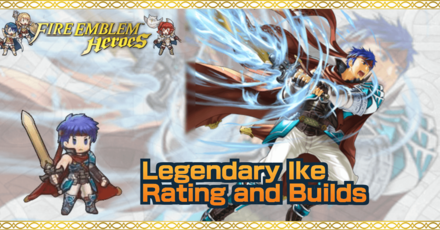 This is a ranking page for the hero Ike - Vanguard Legend from the game Fire Emblem Heroes (FEH). Read on to learn the best IVs (Individual Values), best builds (Inherit Skill), weapon refinement, stats at Lv 40, and more for Legendary Ike.

Legendary Ike's best IVs are +Spd and -HP. L! Ike's base Spd of 30 is somewhat mediocre, so an asset in Spd will allow him to prevent more enemy follow-up attacks. -HP is probably the ideal, but note that it will give him -4 to the stat. He can recover HP through his Special Skill, however, so all in all this is not a huge setback.

We recommend a +Spd IV when merging Legendary Ike to 10. This is for the same reasons as above. With this IV, he can reach 37 Spd at max merges. This allows him to block most follow-up attacks, but it is not enough to score follow-up attacks on faster units. Though he can definitely nail consistent follow-up attacks with some support. If you prefer relying on skills to increase Ike's Spd, you can go for a +Atk IV instead.

This is the budget build for Legendary Ike. His base kit is quite complete so not much tampering needs to be done to make him effective. A standard Reposition was added and the Quick Riposte 3 Sacred Seal allows him to score follow-up attacks when attacked. It synergizes well with Warding Breath. He has two C skills, but Joint Drive Res is the superior option compared to Def Tactic 3.

This Ike has inherited the Steady Breath skill. When enemies attack he will definitely be able to counter-attack with Radiant Aether thanks to Quick Riposte 3. The added boost from Wrath will help take the enemies out in one strike! If you don’t notice enemies that are within two spaces of you, it may be good to change to the Killing Edge+, a great weapon for infantry, or the Wo Dao+ for more damage when activating specials. The C skill is very flexible and you can get the newly given Joint Drive Res 3 to make him a bit bulkier against ranged foes.

This Ike has inherited the Special Spiral skill set. This skill set allows him to counter attack with Radiant Aether almost every time. If you need more Radiant Aether II activations, you can get an allied unit with Infantry Pulse 3 to support him. The C skill is very flexible and you can get the newly given Joint Drive Res 3 to make him a bit bulkier against ranged foes.

Legendary Ike's Exclusive Weapon currently cannot be refined. This section will be updated if it becomes refinable in the future.

Legendary Ike is a close-range physical attacker. When the effects of the Weapon Triangle are not taken into account, the damage he deals will be equal to his Atk minus the foes's Def. In addition to being able to counterattack from any range, he has various buff and debuff skills, allowing him to fill various roles in a party.

Legendary Ike is an Earth-Type Legendary Hero, and when summoned, you will receive an Earth Blessing. During Earth Season, allies who appear in a team alongside L! Ike will gain HP+3 and Atk+2 when they have been given an Earth Blessing.

Can counterattack at any range with Ragnell

L! Ike's exclusive weapon Ragnell will allow him to counterattack a foe, regardless of their range. As ranged attackers are often the bane of infantry sword units, this is an extremely useful skill to have.

Legendary Ike's Default A skill Warding Breath will speed up his special cooldown when the foe initiates combat. Radiant Aether II has a coldown count of 4, so if he takes two attacks from a foe, his Special will trigger the next time he goes into combat.

Additionally, Radiant Aether II has a cooldown reduction at turn 1, so if you nail a follow-up attack on the player phase, you can proc it immediately if you receive a counterattack 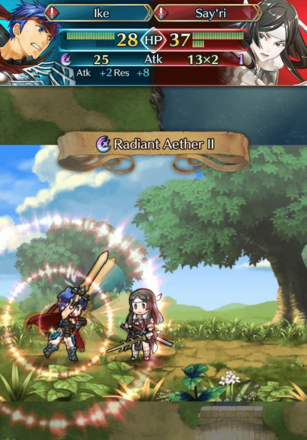 In this case, Radiant Aether II procs on the first counterattack of the map thanks to the counter reduction in the first turn and Warding Breath's charge boost.

Def Tactic 3 will grant Def+6 to allies within two spaces. This is limited two units of a movement type with only two or less units in the party, so it is ideal in a mixed movement party. This skill will be easily be wasted in modes like Aether Raids or Grand Conquests where there are many units of the same type on a single team, so just watch out for that.

As of 2021, Legendary Ike has gained the native ability to learn Joint Drive Res. If you decide to opt with this skill instead of Def Tactic 3, you can improve Ike's and his allies Res stat allowing your team to take on magic-based enemy lineups with more ease.

Taking two blows from a magic attacker can spell death

Even with the Res boost from Warding Breath L! Ike has a pretty low Res stat, so taking a follow-up attack from a magic attacker could be enough to wipe him out. Avoid magic attackers when possible, and only allow them to strike first when Ike can definitely take them down with the first hit of a counterattack.

If you are having trouble with magical units, you can go with his alternative, and arguably more usefull C skill, Joint Drive Res.

Units to buff his attack power

Having a support unit to increase L! Ike's damage output is ideal. Units like L! Azura and Flying Olivia who can buff Ike while simultaneously granting additional movement can allow him to OHKO foes. Units like Marisa with Infantry Pulse can also help reduce his special cooldown and assist him in upping his damage output.

Units who can take down blue mages

While L! Ike has a pretty solid Def stat, his meager Res stat of 21 means that an attack from a magic attacker will offten wipe him out before he even has a chance to counter. A blue mage/dragon counter like Myrrh or Surtr on the same team will significantly increase his survivability.

L! Ike will be OHKO'd by blue mages like Reinhardt or Ophelia before he can even counterattack. Use someone like Surtr or Myrrh instead to absorb the hit and then take them down.

Despite his high damage output, he will have trouble dealing significant damge to units like Legendary Tiki or Lukas who have very high Def stats. Attacking Lukas will inflict 0 damage, resulting in a counterattack where Lukas' special triggers and destroys Ike, so stay out of the danger zone when this type of foe draws near. Foes like Brave Lyn or Veronica are able to target Ike with an attack without fear of a counterattack, which will usually result in his defeat.

Should you Unlock Potential for Legendary Ike?

Ike - Vanguard Legend Only Appears as a 5 Star Hero!

Legendary Ike as a Source Hero

Legendary Ike can be used to inherit Warding Breath or Joint Drive Res, However, as a powerful Legendary Hero, we recommend developing and building at least one Legendary Ike, before foddering off or merging any duplicates.

If you have a bad bane, you can create a +1 merge first before fodderring off duplicates.


How to Get Legendary Ike / Illustrations / Voice Actor / Quotes

How to Get Legendary Ike

Legendary Ike can be obtained automatically after clearing Xenologue 3 (Normal). When obtained, they will already be at a 5★ Rarity and have base stats (no IVs).

Legendary Ike is a limited time Hero who can be pulled from a Legendary Hero Summoning event. They do not appear in regular summons.

Register as a member and get all the information you want. (It's free!)
Login
Opinions about an article or post go here.
Opinions about an article or post
We at Game8 thank you for your support.
In order for us to make the best articles possible, share your corrections, opinions, and thoughts about "Legendary Ike Builds and Best IVs" with us!
When reporting a problem, please be as specific as possible in providing details such as what conditions the problem occurred under and what kind of effects it had.