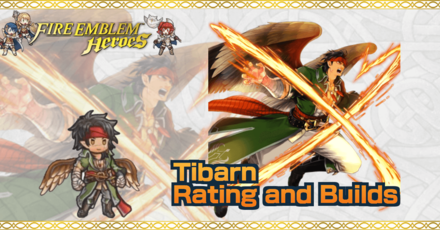 This is a ranking page for the hero Tibarn - Lord of the Air from the game Fire Emblem Heroes (FEH). Read on to learn the best IVs (Individual Values), best builds (Inherit Skill), weapon refinement, stats at Lv 40, and more for Tibarn.

Tibarn already has a skill that grants him a guaranteed follow-up attack, so a +Atk IV increases the possibility of OHKOing foe in combat. His Res stat is rather low by nature, so it is probably the best bane for him, but as long as you have a +Atk Tibarn, the bane is rather insignificant.

Tibarn can gain guaranteed follow-up attacks when certain conditions are met, so using his high Atk power and Heavy Blade to speed up his special cooldown, this build aims to trigger Galeforce and grant Tibarn additional movement. When his HP gets below 75%, he will be able to attack consecutively, meaning that he can easily solo KO several foes one after another.

Tibarn's Exclusive Weapon currently cannot be refined. This section will be updated if it becomes refinable in the future.

Tibarn is a close-range physical attacker. When the effects of the Weapon Triangle are not taken into account, the damage he deals will be equal to his Atk minus the foes's Def.

Tibarn's Exclusive Weapon skill Hawk King Claw allows him to get a guaranteed follow-up attack when initiating combat against a foe with 100% HP. Additionally, this skill gives him +1 movement, provided he starts the turn not adjacent to any non-beast or non-dragon type allies. This gives him a huge advantage in the attack phase.

In addition to the effects from his weapon skill, Tibarn has the skill Sturdy Impact, which gives him Atk+6 and Def+10 when initiating combat. This skill also prevents an enemy follow-up attack, and solidifies Tibarn's power as an attack phase unit.

Team gets an Atk boost on Even numbered turns

As a flying unit, one hit from a bow wielding foe can be lethal against Tibarn. Stay out of the range of archers, and either let another ally take them down instead of Tibarn, or wait until they are close enough to safely strike down.

Can be OHKO'd with magic attacks

With his low Res stat, Tibarn can also be wiped out relatively easily through magic attackers. He particularly needs to avoid foes like Reinhardt and Ophelia, both of whom are powerful blue mages that can easily OHKO Tibarn. Avoiding the attacks of powerful blue magic attackers and using another ally to combat them instead is a must for a team with Tibarn.

Should you Unlock Potential for Tibarn?

Tibarn - Lord of the Air Only Appears as a 5 Star Hero!

Tibarn as a Source Hero

Sturdy Impact can be inherited from Tibarn. However, as one of the most powerful attack phase units in the game, it is better to keep and develop at least one Tibarn before foddering off or merging any duplicates.


How to Get Tibarn / Illustrations / Voice Actor / Quotes

Tibarn is a Hero who can be pulled from any summon.

Register as a member and get all the information you want. (It's free!)
Login
Opinions about an article or post go here.
Opinions about an article or post
We at Game8 thank you for your support.
In order for us to make the best articles possible, share your corrections, opinions, and thoughts about "Tibarn Builds and Best IVs" with us!
When reporting a problem, please be as specific as possible in providing details such as what conditions the problem occurred under and what kind of effects it had.