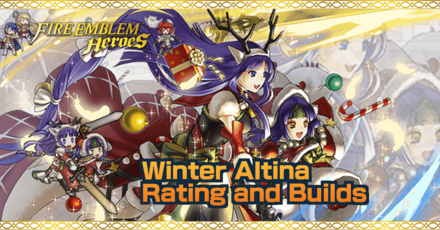 This is a ranking page for the hero Altina - Cross-Time Duo from the game Fire Emblem Heroes (FEH). Read on to learn the best IVs (Individual Values), best builds (Inherit Skill), weapon refinement, stats at Lv 40, and more for Winter Altina.

Winter Altina's best IVs are +Atk and -Spd. With her low Spd of only 18, Winter Altina does not get follow-up attacks this way, but instead relies on her exclusive weapon, which always grants her an extra attack. Since this is the case, the ideal stat to maximize would be Atk, so that you can increase her damage output.

We recommend a +Atk IV when merging Winter Altina to 10. This is for the same reasons as above. The higher Altina's Atk stat is, the more damage she will deal. This will help her in taking out enemies without taking damage and more importantly, Vantage sweeping with her Harmonized Skill.

Winter Altina's base kit is pretty complete, so you don't need much investment to begin with. As she will be taking enemy phase damage whenever her active Vantage is not up, it is best to get a Sacred Seal that gives her a balance of both offense and defense. Our choice is Atk/Def Solo 3 as she already has great Res. This will allow her to take damage from a wide range of foes. It also works well with the trigger conditions of her other skills.

Winter Altina's weapon cannot currently be refined. This section will be updated if it becomes refineable in the future!

Winter Altina is a close physical attacker (range = 1). Therefore, when not accounting for the Weapon Triangle, the amount of damage she deals will be equivalent to her Atk minus the foe's Def stat. 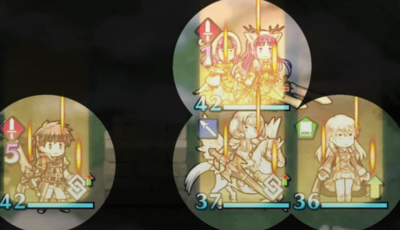 Exclusive weapon that can counter at any range and attack twice

Altina's weapon Ragnell·Alondite is not just another Distant Counter-built in weapon, but it also lets her attack twice even when the foe initiates combat. Therefore, she is capable of dealing massive damage both when initiating combat and when defending.

Altina's Special Skill Twin Blades will boost damage by 40% of the foe's Res stat, and nullify any non-special skill that reduces the damage a unit takes. In particular, this will be good against weapon skills like the refined form of Urvan held by Brave Ike, who is commonly used in Aether Raids.

Damage reduction effects are growing to be a very common mechanic in the game. This makes this exclusive skill extra relevant.

Winter Altina is not a true Altina alt without the Vantage sweeps! Instead of the classic B skill Vantage 3, Winter Altina's Vantage comes in the form of a Harmonized Skill. Its details are listed above.

Though it does not take up a slot in the B skill and it does not require an HP trigger, it is only available for 1 turn. This makes it hard to utilize in longer battles.

Neutralizes debuffs to Atk/Res and grants buffs to it

If Winter Altina is within 2 spaces of an ally, Atk/Res Unity grants her +5 Atk/Res and converts penalties on Atk/Res and turns them into bonuses. It is a pretty simple trigger condition and it is almost impossible to have trouble keeping it online.

This makes Winter Altina an effective unit in Aether Raids because debuffs are very common in that game mode. The more debuffs Altina gets, the stronger and bulkier she becomes. Plus the added Res will help her deal more damage with Twin Blades.

Vantage is limited to her Harmonized Skill

Unlike the original Altina alt, Winter Altina's only access to Vantage is through her Harmonized Skill and this only lasts through 1 turn. This means that for longer battles, Winter Altina will not be able to Vantage sweep easily.

In addition, a structure in Aether Raids can also block Winter Altina from using her Harmonized Skill entirely so watch out for that.

Taken out easily if she fails to take out her opponent

Winter Altina has an abysmally low Spd stat. Even the slowest of units can nail follow-up attacks against her. If high-powered units are able to land a counterattack on her or gets to attack her, this will surely lead to a follow-up that has a high chance of taking her out.

This is why you should increase her Atk stat as much as possible so that when she engages an enemy, they are sure to fall to to the Twin Blades. However, in the enemy phase, if Vantage is not up, she is quite defenseless. Make sure that she does not dive deep into enemy danger zones if the Vantage from her Harmonized Skill is not active!

Should you Unlock Potential for Winter Altina?

Altina - Cross-Time Duo Only Appears as a 5 Star Hero!

Winter Altina as a Source Hero

Winter Altina can be used to inherit the skill Atk/Res Unity. However, since Winter Altina is a powerful special hero that you can only obtain from a special heroes banner, we recommend training and building her instead. Additionally, she is a Harmonized Hero that can lead your team in and out of Resonant Battles.

How to Get Winter Altina / Illustrations / Voice Actor / Quotes

How to Get Winter Altina

Winter Altina is a limited time Hero who can be pulled from a Special Heroes Summoning Event. They do not appear in regular summons.

Register as a member and get all the information you want. (It's free!)
Login
Opinions about an article or post go here.
Opinions about an article or post
We at Game8 thank you for your support.
In order for us to make the best articles possible, share your corrections, opinions, and thoughts about "Winter Altina Builds and Best IVs" with us!
When reporting a problem, please be as specific as possible in providing details such as what conditions the problem occurred under and what kind of effects it had.