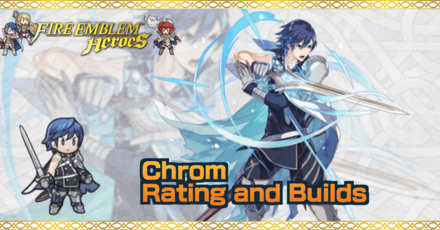 This is a ranking page for the hero Chrom - Exalted Prince from the game Fire Emblem Heroes (FEH). Read on to learn the best IVs (Individual Values), best builds (Inherit Skill), weapon refinement, stats at Lv 40, and more for Chrom.

This build makes use of Steady Breath. Since his special cooldown will speed up each time Chrom takes an attack, Aether will be easier to trigger, making him very powerful. The most effective way is use this build is in the enemy phase, by having Chrom endure attacks from foes to destroy them with a counterattack.

You can replace Falchion with a Sealed Falchion if you have the resources to do so.

Falchion (Awakening) can be refined, but we recommend running Sealed Falchion instead

The special effect for Falchion grants Chrom +4 to all stats during combat when he is close to an ally. It's pretty easy to utilize, and since you will likely want a support unit nearby anyway, it is a good fit for him.

We recommend the Special Effect Refine for Sealed Falchion

With any upgrade you take for Sealed Falchion, it will make it easier to grab the +5 Atk/Spd/Def/Res buff because it adds another trigger condition. If a bonus is active on Sealed Falchions wielder, they will now activate the buff too.

Additionally, and more imporantly, the sword will now grant an additional +5 Atk/Spd/Def buff during combat it the enemy is at least at 75% HP. It also blocks follow-up attacks from the enemy so this is a very valuable effect.

This is superior to the normal Falchion's special effect refine.

Chrom is a close physical attacker (range = 1). Therefore, when not accounting for the Weapon Triangle, the amount of damage he deals will be equivalent to his Atk minus the foe's Def stat.

Falchion is strong against dragon characters such as Myrrh and Idunn. It deals 1.5x damage on dragon units such as the previously mentioned duo. In addition, Falchion heals Chrom for 10HP at the start of every odd-numbered turn. The effects are very straightforward and easy to utilize. The healing aspect of Falchion makes Chrom a great unit in consecutive battle maps such as Tempest Trials.

Falchion has a special refinement effect of granting Chrom +4 to all stats in combat whenever he is adjacent to allies. It synergizes well with Spur Def 3 so make sure to always be adjacent to allies when attacking. Avoid pairing Chrom with units that are stronger when they are alone such as L!Edelgard and Sothis.

However, Chrom's Falchion can be evolved to Sealed Falchion which is superior to the Falchion by a mile when it has access to its special effect refine.

Aether treats foe's Def/Res as 50% of their original values, and it heals him for half the damage dealt. It is one of the most powerful skills available, but its special cooldown counter is 5. However, if the attack is timed correctly, or you build his skillset around speeding it up, it can easily turn the tides of battle.

Spur Def 3 grants a fair +4 Def to allies who are in combat that are adjacent to Chrom. It's a flexible skill that doesn't need to meet its requirements at turn start so you can adjust the positioning of Chrom and her allies before attacking foes.

Chrom has a very low Res stat of 17 at Lv. 40 so you should avoid magic users that have high Atk. Even if Chrom's Falchion is strong aganst dragon units, you will have a hard time dealing with blue dragons like Legendary Tiki (Young).. If you attack her with Chrom, odds are that Chrom will be taken out by the counterattack. Leave units like her to other units so Chrom can focus his firepower on easier to take down foes.

Chrom as a Source Hero

Chrom can be used to inherit the skill Aether. This skill is only inheritable from 5 star Chrom, so be sure and think carefully about who to fodder the skill off to.

How to Get Resplendent Chrom / Illustrations / Quotes

How to Get Resplendent Chrom

Resplendent Chrom can be obtained by buying a FEH Pass. After the distribution period has ended, they can also be purchased by FEH pass subscribers.

How to Get Chrom / Illustrations / Voice Actor / Quotes

How to Get Chrom

Chrom is a Hero who can be pulled from any summon.

Register as a member and get all the information you want. (It's free!)
Login
Opinions about an article or post go here.
Opinions about an article or post
We at Game8 thank you for your support.
In order for us to make the best articles possible, share your corrections, opinions, and thoughts about "Chrom Builds and Best IVs" with us!
When reporting a problem, please be as specific as possible in providing details such as what conditions the problem occurred under and what kind of effects it had.