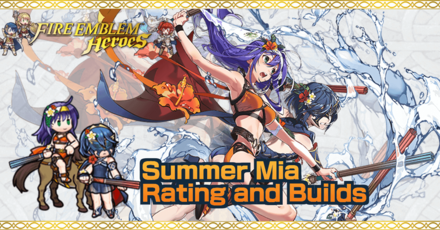 This is a ranking page for the hero Mia - Harmonic Blades from the game Fire Emblem Heroes (FEH). Read on to learn the best IVs (Individual Values), best builds (Inherit Skill), weapon refinement, stats at Lv 40, and more for Summer Mia.

The best IVs for Summer Mia are +Atk and -Res. Summer Mia is already fast and increasing her Atk would best maximize her damage potential. Her Res stat is already low and it is not really important for her so it is safe to take as a bane.

We recommend a +Atk IV when merging Summer Mia to 10. This maximizes Summer Mia's damage potential because she already has very high Spd especially in the player phase where Swift Sparrow 3 can be triggered.

Summer Mia is a ranged physical attacker (range = 2). Therefore, when not accounting for the Weapon Triangle, the amount of damage she deals will be equivalent to her Atk minus the foe's Def stat.

Summer Mia's harmonized skill grants her and all allies coming from Fire Emblem titles such as Radiant Dawn, Path of Radiance and Awakening +4 Atk/Spd. There are a lot of powerhouses from these titles such as Ike and Chrom so this can be a great skill depending on the circumstances.

The skill does not have any additional trigger requirements besides the one mentioned above. It is a combat buff, meaning, it can be easily stacked with other buffs and it does not make the target units susceptible to panics and chills. Lastly, it is refreshed at the start of every third turn. All of these quirks make this skill extremely valuable and adds to Summer Mia's value as a versatile unit.

Summer Mia gets a total of +11 Atk and +12 Spd when she initiates combat because of the effects of Swift Sparrow 3 and Summer Strikers. The latter also reduces the damage from the first counterattack of the foe by 75%. This makes Summer Mia great in player phase combat as she gets huge boosts and damage reduction from counterattacks.

Excels as a Support!

Her kit also includes Atk/Spd Gap 3 which grants +5 Atk/Spd to the ally with the highest offensive stat total for a turn. This skill excludes Mia so it is always granted to another ally unit. All these skills make her a great support unit on top of being an offensive option.

Summer Mia takes 1.5x damage from cavalry-effective weapons like Ridersbane, and one blow from this type of weapon is sure to take her down. Make sure you know what weapons you are up against before hopping too far into the line of battle!
Heroes with Effective Skills

Mia - Harmonic Blades Only Appears as a 5 Star Hero!

Summer Mia as a Source Hero

Summer Mia can be used to inherit the skills Swift Sparrow 3 or Spd/Def Snag 3. However, Summer Mia is a powerful and very versatile hero that can fit in many team compositions so we recommend against fodderring her off. Train her and make use of her abilities instead!

How to Get Summer Mia / Illustrations / Voice Actor / Quotes

How to Get Summer Mia

Summer Mia is a limited time Hero who can be pulled from a Special Heroes Summoning Event. They do not appear in regular summons.

Register as a member and get all the information you want. (It's free!)
Login
Opinions about an article or post go here.
Opinions about an article or post
We at Game8 thank you for your support.
In order for us to make the best articles possible, share your corrections, opinions, and thoughts about "Summer Mia Builds and Best IVs" with us!
When reporting a problem, please be as specific as possible in providing details such as what conditions the problem occurred under and what kind of effects it had.