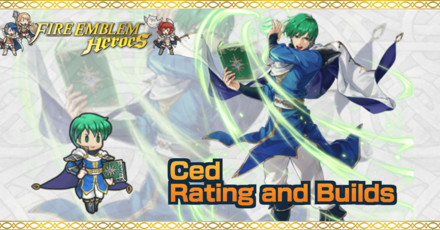 This is a ranking page for the hero Ced - Hero on the Wind from the game Fire Emblem Heroes (FEH). Read on to learn the best IVs (Individual Values), best builds (Inherit Skill), weapon refinement, stats at Lv 40, and more for Ced. 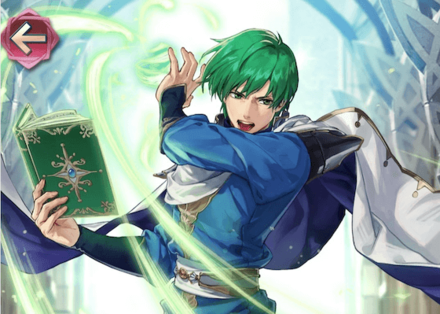 Ced's best IVs are +Atk and -HP. Ced's base Spd is already quite high, and the effects of his exclusive weapon and A skill further this, so any higher than that is basically just overkill, and you should instead be thinking about the damage dealt in each hit of an attack. HP is much lower priority, and the ideal bane.

If you are building a +10 Merge Ced, +Atk is the best IV. With an Atk boon and +10 merge, Ced's Atk will reach 58, allowing him to gain follow-up attacks on most foes and take them down. However, if you are planning to use Res Ploy and have Ced play a magic tank role, +Res is a good IV as well.

Ced's Exclusive Weapon currently cannot be refined. This section will be updated if it becomes refinable in the future.

Ced is a ranged magic attacker (range = 2). Therefore, when not accounting for the Weapon Triangle, the amount of damage he deals will be equivalent to his Atk minus the foe's Res stat.

Gains a bonus when there are no adjacent allies

Ced has the exclusive skill Winds of Silesse, and together with Spd/Res Solo 3, he will gain a massive bonus when soloing. When both skills are active, Ced gains Atk+6, Spd+12, and Res+6, allowing him to inflict massive damage on foes. Ced will primarily want to move solo, so he will pair well with beast units that also aim to stay out of his way.

Casts a penalty on foes, making it more difficult to trigger a special

Ced's C skill, Pulse Smoke, will inrease the cooldown count of enemies within two spaces of a foe after combat (and the foe). In addition to being useful for shutting down specials so Ced can finish them off in the next turn, Ced will pair well with units like Yune or Hríd, who are very powerful when facing foes who do not have a special ready, and this skill can also help provide debuff support for a team.

Rather weak when near an ally

Winds of Silesse and Spd/Res Solo 3 will not trigger when Ced is adjacent to an ally, so he does not have the same firepower when he is not going solo. This means he will struggle to use these skills effectively when the map is small or filled with obstacles to restrict movement.

Ced has a low Def stat, so he takes heavy damage from physical attacks. Brave weapons that land consecutive hits can destroy him before he even has a chance to retaliate. Unless Ced is attacking, make sure he is out of the range of physical attackers.

Should you Unlock Potential for Ced?

Ced - Hero on the Wind Only Appears as a 5 Star Hero!

Ced as a Source Hero

Ced can be used to inherit Pulse Smoke 3. However, he is a rather strong hero, so think hard about whether or not you are okay with foddering him off for this skill.


How to Get Ced / Illustrations / Voice Actor / Quotes

How to Get Ced

Ced is a Hero who can be pulled from any summon.

Register as a member and get all the information you want. (It's free!)
Login
Opinions about an article or post go here.
Opinions about an article or post
We at Game8 thank you for your support.
In order for us to make the best articles possible, share your corrections, opinions, and thoughts about "Ced Builds and Best IVs" with us!
When reporting a problem, please be as specific as possible in providing details such as what conditions the problem occurred under and what kind of effects it had.