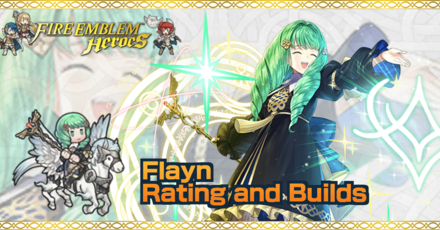 This is a ranking page for the hero Flayn - Playing Innocent from the game Fire Emblem Heroes (FEH). Read on to learn the best IVs (Individual Values), best builds (Inherit Skill), weapon refinement, stats at Lv 40, and more for Flayn.

The best IVs for Flayn are +Atk and -Def. +Atk is very important for Flayn as it increases both her damage and the amount she heals to other units. Take note that Caduceus Staff has Wrathful Staff 3 built-in so she can deal massive damage with it. This makes the +Atk IV more significant. Her Def is very low and is of less importance so it can be safely taken as a bane.

We recommend a +Atk IV when merging Flayn to 10. This is for the same reasons as above. At this point, Flayn will heal a lot of health and deal large amounts of damage per attack. If you prefer a Flayn that can tank magical attacks, you can go for a +Res IV instead.

Flayn's weapon cannot currently be refined. This section will be updated if it becomes refineable in the future!

Caduceus Staff has the simple effect of reducing damage taken by allies by 30%. This is active as long as they are within 2 spaces of Flayn. Utilize Ground Orders 3 to make sure that your team is always in reach of each other.

We recommend using this skill in conjuction with a very tanky ally as the 30% damage reduction will be efficiently utilized.

Rescue+ is a combination of a heal and a movement-assist

When Flayn uses Rescue+ on an ally, it restores HP equal to 50% of Flayn's attack and an effect similar to Drag Back occurs. This is unique in the sense that it is both a heal and a movement-assist skill. Its clear use is to help allies retreat into safer zones while healing them though you can defnitely be more creative with such a versatile skill. This significantly reduces the chance of that ally getting taken out in battle.

The only obvious drawback to this is it does not lead to Deluge Balm+ or any other special from activating. Survey the needs of the map, attack or heal accordingly to lead your team to victory.

Ground Orders 3 allows infantry, armored and cavalry allies adjacent to Flayn at the start of a turn the ability to move to a space adjacent to allies within 2 spaces of them. This ability greatly increases the mobility of ground allies. This also provides a lot of utility as you can use it to both fling allies into battle or position them in a safer place. This makes Flayn a potential candidate for parties that revolve around ground allies despite her movement type.

Flayn's Def only sits at 21 at Lv.40. Be mindful of Flayn's positioning in relation to physical units that can easily take her out. Her Def stat is not that bad, but if you consider that her Spd is not the best too at 27, she can be easily taken out by a follow-up attack from a physical unit.

As a flying unit, Flayn takes 1.5x damage from bows and weapons effective on flying units. Be sure to keep them out of the range of archers and leave them to other units. This weakness is compounded by her bad Def and Spd stats.

Should you Unlock Potential for Flayn?

Flayn - Playing Innocent Only Appears as a 5 Star Hero!

Flayn as a Source Hero

Flayn can be used to inherit Rescue+ or Deluge Balm+. However, Flayn is a very complete support hero that can provide so much to different kinds of line-ups! We recommend training and investing in her instead. She does not need merges to be super effective so just getting a full kit of skills will do.

How to Get Flayn / Illustrations / Voice Actor / Quotes

Flayn is a Hero who can be pulled from any summon.

Register as a member and get all the information you want. (It's free!)
Login
Opinions about an article or post go here.
Opinions about an article or post
We at Game8 thank you for your support.
In order for us to make the best articles possible, share your corrections, opinions, and thoughts about "Flayn Builds and Best IVs" with us!
When reporting a problem, please be as specific as possible in providing details such as what conditions the problem occurred under and what kind of effects it had.