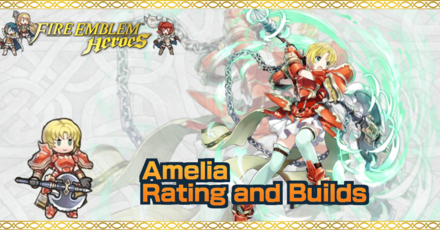 This is a ranking page for the hero Amelia - Rose of the War from the game Fire Emblem Heroes (FEH). Read on to learn the best IVs (Individual Values), best builds (Inherit Skill), weapon refinement, stats at Lv 40, and more for Amelia.

The recommended IVs for Amelia are +Spd and -Res. Amelia has one of the highest Spd stats of all armored units in the game, so she can use Armored March to move two spaces and take down foes by getting follow-up attacks, making her unlike any other armored hero. Therefore, it is ideal to have a bit of extra Spd to further enhance this trait.

This build makes use of Distant Counter and Blue Flame, and Amelia’s refined weapon. In order to cover Amelia’s low Atk stat, you can have her inherit Blue Flame to increase her damage output. Through a combination of Amelia’s weapon skill and Special Fighter, Amelia can trigger a special skill when counterattacking a foe. This build is a bit of an investment, but it will really make the most of her ability.

This is a low cost low investment build for Amelia. By recovering HP with her B skill set to Renewal, she will be able to maintain the effects of Earth Boost. While Earth Boost remains active, her Def will be enhanced as well, increasing the damage dealt through Bonfire.

This is a build based around Death Blow and Special Fighter. This build is recommended for those who want to make Amelia a player phase unit. Death Blow and Darting Blow allow her to get follow-up attacks, and with Special Fighter speeding up her special cooldown, Aether becomes easier to trigger, allowing her to OHKO many units.

We Recommend the Special Effect Upgrade!

We recommend giving the additional special effect to Grado Poleax. Doing so will allow her to gain +Spd/Def during battle when she has received a bonus from a skill like Rally/Hone or additional movement. Because Amelia learns the skill Armored Boots 3, the condition is easy to meet, and has great synergy with her skillset.

Her Spd is very high for an armored unit, so this will make it even easier for her to prevent an enemy follow-up attack.

Amelia is a close ranged physical attack phase unit. Therefore, when not accounting for the Weapon Triangle, the amount of damage she deals will be equivalent to her Atk minus the foe's Def. Additionally, she has the skill Armored March, which is vital to any armored party, as well as skills that can buff her own Def stat.

Amelia's Grado Poleax makes it easy to trigger special skills. Using the special effect type refinement, she will gain an additional Spd/Def +5 when she receives a bonus from a support skill like hone/fortify, as well as additional movement. Since she learns the skill Armored March, this is an easy condition to meet.

With the effect of Armored March 3, Amelia and an adjacent armored ally will be allowed to move 2 spaces. Low mobility is often the weakness for an armored party, so gaining additional movement will allow them to to move through forest spaces without suffering the movement penalty an infantry unit would, which is a huge plus.

Amelia has the skill Earth Boost 3, which increases her Def when her HP is 3 points higher than that of her foe. This can further enhance her already high Def stat.

As an armored unit, Amelia can usually be used to tank enemy attacks, but she will take great damage from weapons like Armorslayer+ and Hammer+. Be wary of your opponents weapons when making your strategy.

Low Mobility Without Another Armored Unit

Amelia's Armored March unfortunately can only activate with an adjacent armored unit. In a party where she is the only armored unit, this skill will completely go to waste and she will only move one space at a time, so choose your party wisely.

Should you Unlock Potential for Amelia?

Amelia - Rose of the War Only Appears as a 5 Star Hero!

Amelia as a Source Hero

You may wish to use Amelia as a source for Armored March 3. Killer Axe+ is also obtainable through the Weapon Refinery, so we would recommend prioritizing the skill Armored March 3 over it.

How to Get Amelia / Illustrations / Voice Actor / Quotes

How to Get Amelia

Amelia is a Hero who can be pulled from any summon.

Register as a member and get all the information you want. (It's free!)
Login
Opinions about an article or post go here.
Opinions about an article or post
We at Game8 thank you for your support.
In order for us to make the best articles possible, share your corrections, opinions, and thoughts about "Amelia Builds and Best IVs" with us!
When reporting a problem, please be as specific as possible in providing details such as what conditions the problem occurred under and what kind of effects it had.