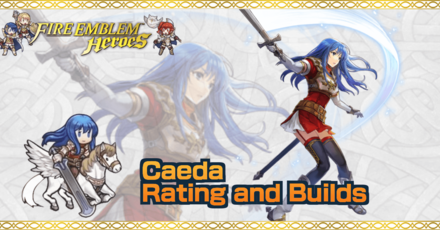 This is a ranking page for the hero Caeda - Talys's Heart from the game Fire Emblem Heroes (FEH). Read on to learn the best IVs (Individual Values), best builds (Inherit Skill), weapon refinement, stats at Lv 40, and more for Caeda.

Caeda's best IVs are +Atk and -HP. With a superboon in Atk, Caeda gains +4 from this IV, which has quite a significant impact on her weakness, which is her low firepower. Her HP is less of a priority, so having it as her bane is ideal.

This skillset uses Caeda’s exclusive weapon Wing Sword. The trusty Fury and Desperation combo works extremely well with her stats, making her more usable in a variety of situations. Def Ploy 3 or another Ploy skill in the C slot will let her make the most of her high Res stat.

This build is based around Ruby Sword and Distant Counter. Having a triangle adept weapon and ability to counter all foes will give Caeda all the power she needs to take down almost any green foe. If your aim is to deal with enemy Blade builds, you can set Dull Ranged 3 in the B slot and Quick Riposte as a sacred seal.

We recommend the Special Effect type upgrade for Caeda's weapon Wing Sword. Doing so will give her the same effect as Flashing Blade 3, which takes advantage of her high Spd stat to make it easier to deal a special attack.

Caeda is a close ranged physical attacker (range = 1). Therefore, when not accounting for the Weapon Triangle, the amount of damage she deals will be equivalent to her Atk minus the foe's Def stat. In addition, her weapon is effective on armored and cavalry units, and she can buff her flier allies.

Weapon skill is effective on both armored and cavalry

Wing Sword can be upgraded via the Weapon Refinery. Doing so will give her the same effect as Flashing Blade 3, which takes advantage of her high Spd stat to speed up her special cooldown count.

Caeda stands out among fliers in terms of her Spd and Res stats. Her naturally high ability to endure magic attacks is furthered with weapon advantage, and even moreso with the skill Triangle Adept and Ruby Sword, allowing her to safely tank green magic.

Grants a significant defensive boost to her flying allies

The buff gained from Fortify Fliers is very strong. In addition to upping her allies' defensive stats, it can be used to amplify the power of a blade tome used by Spring Camilla, etc.

As a flier, Caeda is naturally weak to arrows, and takes additional damage from them. With her mediocre Def stat, she is best off avoiding conflict with archers altogether.

Struggles to deal heavy damage with her low Atk stat

Caeda's Atk stat is quite low, so she struggles to inflict heavy damage to foes. If you wish to use her as an attacker, a +Atk bane is essential, and you will need to make use of other buffs, passives, and sacred seals to cover this weak point.

Should you Unlock Potential for Caeda?

Caeda as a Source Hero

You may choose to use Caeda as a source for Fortify Fliers. She learns this even at lower rarities, so if you have a 4 Star Caeda that you do not intend to build, we recommend converting her into a Combat Manual.

How to Get Caeda / Illustrations / Quotes

How to Get Resplendent Caeda

Resplendent Caeda can be obtained by buying a FEH Pass. After the distribution period has ended, they can also be purchased by FEH pass subscribers.

How to Get Caeda / Illustrations / Voice Actor / Quotes

Caeda is a Hero who can be pulled from any summon.

Register as a member and get all the information you want. (It's free!)
Login
Opinions about an article or post go here.
Opinions about an article or post
We at Game8 thank you for your support.
In order for us to make the best articles possible, share your corrections, opinions, and thoughts about "Caeda Builds and Best IVs" with us!
When reporting a problem, please be as specific as possible in providing details such as what conditions the problem occurred under and what kind of effects it had.