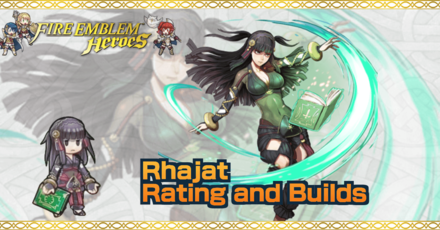 This is a ranking page for the hero Rhajat - Black Magician from the game Fire Emblem Heroes (FEH). Read on to learn the best IVs (Individual Values), best builds (Inherit Skill), weapon refinement, stats at Lv 40, and more for Rhajat.

The best IVs for Rhajat are +Atk and -Def. Since her tome is strong against cavalry units, taking a +Atk IV will maximize the 1.5x damage multiplier. This allows her to take out a lot of cavalry foes in one hit. Her Def is of less importance so it is safe to take as a bane.

We recommend a +Spd IV when merging Rhajat to 10. At this point, her Atk will be in competent levels so it would be best to get a +Spd IV instead to aim for follow-up attacks. With this IV, she reaches 41 Spd which will be enough to score lots of follow-up attacks if she is backed by buffs. Most cavalry units, because of their relatively bad stats, will not survive a follow-up attack from Obsessive Curse!

We recommend the Special Effect Refine for Obsessive Curse

Obsessive Curse's special effect refine is a must get! Not only does it deal massive AoE damage when combined with Savage Blow 3, but it also inflicts a status that prevents enemies from landing counterattacks through their next actions. This improves Rhajat's presence in the battlefield. She will make her presence felt regardless if there are cavalry units or not.

Rhajat is a ranged magic attacker (range = 2). Therefore, when not accounting for the Weapon Triangle, the amount of damage she deals will be equivalent to her Atk minus the foe's Res stat.

Obssessive Curse grants Rhajat effective damage against cavalry units. This allows her to take out a lot of cavalry units in one hit. It also inflicts -5 Spd/Res to foes within 2 spaces of Rhajat. This is applied during combat, so Rhajat and allies will reap its benefits as long as Rhajat is positioned properly.

Obssessive Curse deals 7 damage to target and all foes within 2 spaces of said target after combat. Additionally, it also inflicts a status that prevents foes from landing counterattacks through their next action. This fully stacks with Rhajat's Savage Blow 3 which deals another 7 damageto all other enemy units wihin 2 spaces of target. All these effects and even the AoE debuff of Obssessive Curse makes it easy for her allies to take out the weakened enemies.

Rhajat's Def and Res sit at only 21 and 24 respectively—these are very low values! To make things worse, she also has a very low HP stat of 36. Position her very carefully as she can be taken out in one hit by a number of units.

Should you Unlock Potential for Rhajat?

Rhajat - Black Magician Only Appears as a 5 Star Hero!

Rhajat as a Source Hero

Rhajat can be used to inherit the skill Keen Gronnwolf+ or Distant Def 3. Take note that Distant Def 3 can also be inherited from free units like Garon or Ashnard and that it is also available as a Sacred Seal!

How to Get Rhajat / Illustrations / Voice Actor / Quotes

Rhajat is a Hero who can be pulled from any summon.

Register as a member and get all the information you want. (It's free!)
Login
Opinions about an article or post go here.
Opinions about an article or post
We at Game8 thank you for your support.
In order for us to make the best articles possible, share your corrections, opinions, and thoughts about "Rhajat Builds and Best IVs" with us!
When reporting a problem, please be as specific as possible in providing details such as what conditions the problem occurred under and what kind of effects it had.