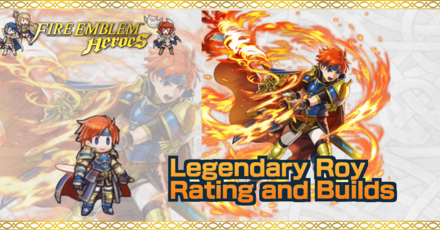 This is a ranking page for the hero Roy - Blazing Lion from the game Fire Emblem Heroes (FEH). Read on to learn the best IVs (Individual Values), best builds (Inherit Skill), weapon refinement, stats at Lv 40, and more for Legendary Roy.

The best IVs for L!Roy are +Spd and -HP. A higher Spd stat allows L!Roy to prevent follow-up attacks and gain even more follow-up attacks of his own. L!Roy can greatly increase both his Atk and Spd through skills, but a +Spd IV helps him avoid follow-up attacks from speedier foes whenever the said buffs are not applied. However, if you're counting on Roy's already high Spd to pull through, a +Atk IV for extra damage per attack is a good option as well.

While a -HP bane will give him -4 to the stat, his defensive stats are in a relatively good spot, so -HP is the best option.

We recommend a +Atk IV when merging L!Roy to 10. At 10 merges, L!Roy's Spd stat will reach 42,, which is more than enough to gain follow-up attacks on most foes, espeically when his Passives are added in. Instead, focus on maxing the damage output with a +Atk boon.

L!Roy's Exclusive Weapon currently cannot be refined. This section will be updated if it becomes refinable in the future.

L!Roy is a close physical attacker (range = 1). Therefore, when not accounting for the Weapon Triangle, the amount of damage he deals will be equivalent to his Atk minus the foe's Def stat.

Legendary Roy is a Fire-Type Legendary Hero, and when summoned, you will receive a Fire Blessing. During Fire Season, allies who appear in a team alongside L!Roy will gain HP+3 when they have been given a Fire Blessing. Additionally, L!Roy's stats are treated as 175, so you are matched up with more powerful teams in the Arena.

Dragonbind is not only powerful against dragons, but it also has the effect of Distant Counter built-in, allowing him to counterattack opponents regardless of range. This frees up his A Slot to equip another useful skill instead, such as his native Bonus Doubler.

Bonus Doubler 3 effectively doubles the effects of L!Roy's buffs whenever in combat. For example, if Fortify Def 3 is active on him, it would normally grant him +4 Def. If L!Roy enters combat with Bonus Doubler 3 equipped, this value is doubled, giving him +8 Def instead.

Human Virtue is a Powerful Buff

Whenever L!Roy is adjacent to a non-beast and non-dragonstone unit, Human Virtue grants him and those units a +6 Atk/Spd buff. It is very powerful and easy to trigger buff, making L!Roy a very deadly offfensive and support unit. Take note that these effects are doubled by Bonus Doubler 3 in combat so L!Roy enjoys +12 Atk/Spd while in combat.

L!Roy has a mediocre Res stat, sitting at 26 Res at Lv. 40. If L!Roy is attacked by a magic unit, there is a high possibility that he will be taken out. Always be mindful of L!Roy's positioning in relation to the enemies who pose a threat to him in the enemy phase. Pay extra attention to blue magic users who can take him out at one turn such as Reindhardt.

L!Roy has access to Bonus Doubler 3, so any buffs applied to him will be doubled. Some good examples would be L!Azura's Prayer Wheel, which grants a bonus to all stats equal to his highest active bonus, or Kaden's Kitsune Fang, which again doubles the bonuses on the unit in combat if they are within 2 spaces of him.

Characters who can deal with blue units

L!Roy, being a red unit, cannot easily deal with blue units. Make sure to pair him up with powerful green units such as Surtr or Brave Ike. You can also consider Nino, who can utilize Bonus Doubler through her buffs, and Thrasir, whose magic attacks can take out units with high Def.

L!Roy's weakness is his somewhat low Res stat of 26. If he is attacked by a magic user, especially blue tome users like Reinhardt, there is a high chance that he will be taken out.

Characters that can turn buffs into penalties

L!Roy is very dependent on stacking as many buffs as possible. Because of this, units like Aversa or Fallen Corrin (F) can pose a large threat to him, as they have abilities that can turn buffs into penalties.

Should you Unlock Potential for Legendary Roy?

Roy - Blazing Lion Only Appears as a 5 Star Hero!

Legendary Roy as a Source Hero

L!Roy can be used to inherit the skill Bonus Doubler 3. However, L!Roy is a powerful fire-type legendary hero. We recommend training and building around him instead.

How to Get Legendary Roy / Illustrations / Voice Actor / Quotes

How to Get Legendary Roy

Legendary Roy is a limited time Hero who can be pulled from a Legendary Hero Summoning event. They do not appear in regular summons.

Register as a member and get all the information you want. (It's free!)
Login
Opinions about an article or post go here.
Opinions about an article or post
We at Game8 thank you for your support.
In order for us to make the best articles possible, share your corrections, opinions, and thoughts about "Legendary Roy Builds and Best IVs" with us!
When reporting a problem, please be as specific as possible in providing details such as what conditions the problem occurred under and what kind of effects it had.