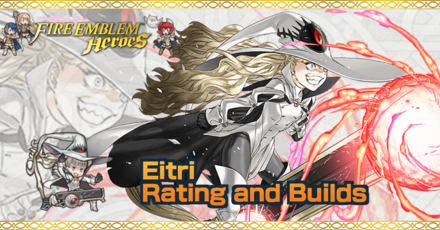 This is a ranking page for the hero Eitri - Youthful Sage from the game Fire Emblem Heroes (FEH). Read on to learn the best IVs (Individual Values), best builds (Inherit Skill), weapon refinement, stats at Lv 40, and more for Eitri.

The best IVs for Eitri are +Atk and -HP. Eitri's Atk stat is a superboon and boosting it allows her to deal more damage to the opponent.

Her other stats are all middle of the pack and lowering them could affect certain matchups. Thus, -HP is the bane of choice.

We recommend a +Atk IV when merging Eitri to +10. Her other stats are not high enough where boosting them further will turn bad matchups into manageable ones. Thus, boosting Eitri's damage output is the best course of action.

Eitri's base kit synergizes well and not much else is needed to make Eitri shine. Simply take note of the solo conditions of Grim Brokkr and the Atk/Res Solo skills for maximum potential.

Eitri is a ranged magic attacker (range = 2). Therefore, when not accounting for the Weapon Triangle, the amount of damage she deals will be equivalent to her Atk minus the foe's Res stat.

As a legendary hero, the Summoner receives a Fire Blessing by default when Eitri is summoned. Being a fire-type Legendary Hero means that during Fire Season, fire-blessed heroes will gain HP+3, and Eitri's effect will make her base stats be treated as 185. This effect makes it easy to raise your arena score when playing her on your team.

Grim Brokkr is a great weapon for offense and mobility 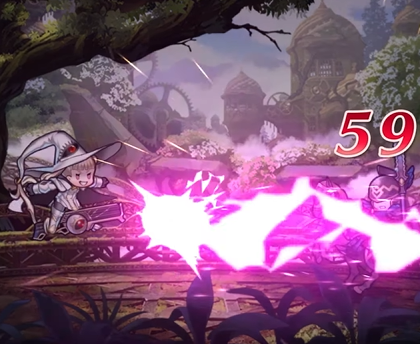 Eitri's personal tome Grim Brokkr is a very powerful tome loaded with effects that can be used both offensively and defensively.

It grants Atk+3 no matter what, and provides additional effects if Eitri initiates combat or if she is not adjacent to an ally.

In addition to the Atk/Res-6 debuff Grim Brokkr inflicts on her foes, Eitri also comes with a unique B skill Divine Recreation and the C skill Atk/Res Rein 3.

Divine Recreation inflicts a -4 debuff to all of the foe's stats during combat, reduces the damage of the foe's first attack by 30%, and boosts Eitri's next attack by the total damage reduced.

Atk/Res Rein 3 inflicts an additional Atk/Res-4 debuff to all foes within 2 spaces during combat.

All these debuffs stack, and with the damage reduction on Divine Recreation, it will take a lot of effort to bring down Eitri.

Eitri's stats are all average, and thus she does not specialize in certain roles. While this seems like a good thing, it means that Eitri cannot perform certain roles as well as other heroes.

Her Spd is decent enough for her to win Spd checks against slower opponents, but not high enough where investment will bring it to levels that can outspeed the faster heroes in the game.

Her defensive stats are all middlling; most of her survivability comes from her various debuffs and the damage reduction from Divine Recreation. Facing a unit who negates either of these effects may lead to Eitri's downfall.

As a flying unit, Eitri takes 1.5x damage from bows and weapons effective on flying units. Be sure to keep her out of the range of archers, and leave them to other units.
Heroes with Effective Skills

Eitri - Youthful Sage Only Appears as a 5 Star Hero!

Eitri as a Source Hero

Eitri has Atk/Res Solo 4 and Atk/Res Rein 3 as skills for inheritance.

These two skills can be obtained elsewhere, but are quite rare themselves.

We recommend keeping a copy of Eitri for use before foddering her for these skills.

How to Get Eitri / Illustrations / Voice Actor / Quotes

How to Get Eitri

Eitri is a limited time Hero who can be pulled from a Legendary Hero Summoning event. They do not appear in regular summons.

Register as a member and get all the information you want. (It's free!)
Login
Opinions about an article or post go here.
Opinions about an article or post
We at Game8 thank you for your support.
In order for us to make the best articles possible, share your corrections, opinions, and thoughts about "Eitri Builds and Best IVs" with us!
When reporting a problem, please be as specific as possible in providing details such as what conditions the problem occurred under and what kind of effects it had.