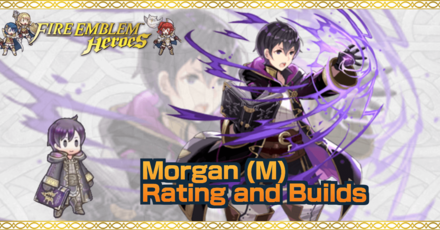 This is a ranking page for the hero Morgan - Lad from Afar from the game Fire Emblem Heroes (FEH). Read on to learn the best IVs (Individual Values), best builds (Inherit Skill), weapon refinement, stats at Lv 40, and more for Morgan (M).

Adaptive damage is when a skill effect calculates damage using the lower of foe's Def or Res.

This build utilizes Morgan's refine to inflict as many penalties to an enemy unit's Atk and Spd in order to maximize his own damage. You can give him whatever Smoke and Lull skills you wish depending on his role in your party.

We recommend the Special Effect Refine for Grima's Truth

This allows him and his allies to deal even more damage and potential one-shot foes.

Morgan (M) is a ranged magic attacker (range = 2). Therefore, when not accounting for the Weapon Triangle, the amount of damage he deals will be equivalent to his Atk minus the foe's Res stat.

Grima's Truth inflicts penalties to an enemy unit's Atk/Spd/Def/Res = 4 + any existing penalties they have to those stats.

This is a very powerful effect that gives a huge stat gap to your team's benefit! That is a huge window that can mean the difference between victory and defeat.

This makes Morgan (M) a good pair with a blade tome user like Tharja who is well invested in. There would only be limited situations wherein a unit would survive a Grima's Truth-backed attack from a blade tome user.

Dull Range 3 neutralizes the bonuses of the foe if they are a ranged unit. Even if Morgan (M) has low defenses, Dull Range makes him deceptively durable against units that rely on buffs such as Fortify and Rally skills. This also makes him a great matchup against magic users that are using a blade tome.

Morgan (M)'s Def and Res sit at only 20 and 26 respectively. This makes him a bit fragile and vulnerable to counterattacks. If you please, you can build him in such a way that would allow him to avoid taking counterattacks.

Should you Unlock Potential for Morgan (M)?

We Recommend Unlocking Potential for Morgan - Lad from Afar!

Morgan (M) as a Source Hero

Morgan (M) can be used to inherit the skills Spur Def/Res 2 or Dull Ranged 3. However, Morgan (M) is a powerful hero with a very useful weapon skill, please think carefully before fodderring him off!

How to Get Morgan (M) / Illustrations / Voice Actor / Quotes

How to Get Morgan (M)

Morgan (M) is a Hero who can be pulled from any summon.

Register as a member and get all the information you want. (It's free!)
Login
Opinions about an article or post go here.
Opinions about an article or post
We at Game8 thank you for your support.
In order for us to make the best articles possible, share your corrections, opinions, and thoughts about "Morgan (M) Builds and Best IVs" with us!
When reporting a problem, please be as specific as possible in providing details such as what conditions the problem occurred under and what kind of effects it had.