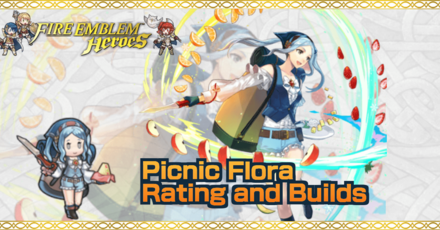 This is a ranking page for the hero Flora - Signature Dish from the game Fire Emblem Heroes (FEH). Read on to learn the best IVs (Individual Values), best builds (Inherit Skill), weapon refinement, stats at Lv 40, and more for Picnic Flora.

The best IVs for Picnic Flora are +Res and -Spd. A higher Res stat allows her to tank more magic damage and makes it easier for her to trigger the effects of her exclusive weapon, Sæhrímnir. Iceberg's damage goes up the more Res you have so having it as a +IV would mean more damage too. With her already subpar Spd stat, it is best taken as a bane.

Picnic Flora is a ranged physical attacker (range = 2). Therefore, when not accounting for the Weapon Triangle, the amount of damage she deals will be equivalent to her Atk minus the foe's Def stat.

Effective on Against Beast Units

In addition to granting +3 Atk, and inflcting -7 Def/Res on foe through its next action, Sæhrímnir is one of the first weapons in the game to be effective against beast units. Lastly, if Picnic Flora's Res is > foe's it reduces the foe's Atk/Spd by 50% of the difference of their Res stats during combat (maximum penalty of -8).

This makes Picnic Flora a good counter to the powerful Caineghis. Caineghis' flaw is his somewhat low Res, and Picnic Flora can exploit his low Res with the effects of Sæhrímnir.

If Picnic Flora initiates combat, she makes a guaranteed follow-up attack because of Bold Fighter 3. In addition to that, the skill grants her +1 special cooldown charge. This synergizes well with Iceberg because it already has a low cooldown count, allowing her to make use of her high Res and spam the powerful special.

If Picnic Flora is adjacent to other armored units, Flora and said units can move 1 extra space for that turn. It is somewhat pretty easy to trigger and it greatly improves the mobility of all armored allies. Another quirk of Armor March 3 is you can move to those tiles even if they are forests similar to how flying movement works.

It is true that Sæhrímnir is strong against Caineghis and Tibarn, but if beast characters attack Picnic Flora, she cannot counterattack because her weapon range = 2. She can be easily taken out by these two beast units if they initiate combat. To avoid this, you can inherit Close Counter onto Picnic Flora.

Picnic Flora is an armored unit, making her weak to skills against such units such as Armorslayer+ and Hana's Katana. If attacked by a unit with Armorslayer+, Flora will take 1.5x damage. Be mindful of what skills your enemies are equipped with. There are lots of weapons like these in the upper ranks of Aether Raids and Arena so be careful.

Flora - Signature Dish Only Appears as a 5 Star Hero!

Picnic Flora as a Source Hero

Picnic Flora can be used to inherit the skills Bold Fighter 3 or Armor March 3. However, Picnic Flora is a powerful special hero that is only available at limited times. We recommend training and building around her instead.

How to Get Picnic Flora / Illustrations / Voice Actor / Quotes

How to Get Picnic Flora

Picnic Flora is a limited time Hero who can be pulled from a Special Heroes Summoning Event. They do not appear in regular summons.

Register as a member and get all the information you want. (It's free!)
Login
Opinions about an article or post go here.
Opinions about an article or post
We at Game8 thank you for your support.
In order for us to make the best articles possible, share your corrections, opinions, and thoughts about "Picnic Flora Builds and Best IVs" with us!
When reporting a problem, please be as specific as possible in providing details such as what conditions the problem occurred under and what kind of effects it had.