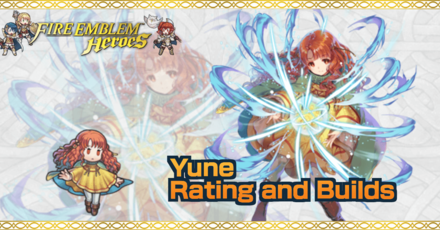 This is a ranking page for the hero Yune - Chaos Goddess from the game Fire Emblem Heroes (FEH). Read on to learn the best IVs (Individual Values), best builds (Inherit Skill), weapon refinement, stats at Lv 40, and more for Yune.

The best IVs for Yune are +Res and -Def. Yune's Exclusive skill relies on her high Res stat, which will reach 43 with a Res asset. Her Def stat is already very low to begin with, so you will be much better off using a Yune based around her high Res stat without thinking about how to use her as a defender.

+Atk is a good IV as well. In this case, you could use a hero such as Aversa to inflict penalties on the opponents while designating Yune as your attacker.

This build is based around inheriting Mystic Boost. Inheriting Death Blow will allow her to take down foes in a single hit will her elevated Atk stat. With Mystic Boost she will be equipped for combat against any foe, including manaketes. This build is recommended for those who want to use Yune as an attacker.

This build is based around Sturdy Impact and Desperation. Using Iote’s Shield as a Sacred Seal will help cover her weaknesses. Using Sturdy Impact will raise her low Def stat, preventing foes from taking her down in one hit, and taking just enough damage to trigger the effects of Desperation.

Yune's Exclusive Weapon currently cannot be refined. This section will be updated if it becomes refinable in the future.

Yune is a ranged magic attacker. Therefore, the damage she gives is equal to her Atk minus the foe's Res when the effects of the weapon triangle are not considered. Additionally, she reduces loss of Lift when defending in Aether Raids.

A Mythic Hero who can boost allies' HP and Spd

Additionally,, when using Yune and Dark-blessed heroes in Aether Raids, the amount of lift lost when your party is defeated will be decreased.

A Mythic Hero with an effect that can be used in Aether Raids!

Yune is a Mythic Hero, and as such comes equipped with the item Dark Blessing when summoned (which is needed for Confer Blessing). When it is Dark season for Aether Raids, using Yune will grant her allies a significant stat boost of HP +5 and Spd +5.

Additionally, using her together with other Legendary Heroes with the Dark blessing during a defense battle wil reduce Defense Lift Loss if the battle is lost.

Excellent when facing foes who have penalties inflicted on them

Chaos Manifest, her Exclusive weapon, allows her to gain Atk +6 during combat and a guaranteed follow-up attack when a negative status effect is active on a foe. The scope of the phrase negative status effect is quite large, including stat penalties, movement reductions, and even counterattack prevention, and she herself is capable of inflicting a penalty over a large area.

Casts a penalty on adjacent foes

She learns the skill Sabotage Res, which can inflict Res -7 on foes whose Resistance is 3 or more points lower than her own when that foe is adjacent to another foe. It can be difficult to trigger, but when active, the extra damage dealt can often be used to take down an foe in just one hit.

Yune's Exclusive skill Chaos Named inflicts a -5 penalty to the highest stat of foes within 3 columns centered on her whose Resistance is 3 or more points lower than her own. The area over which this skill is effective is huge, and using two Yune units in an Aether Raid would allow you to cover the entire map.

▼ The Effect of Chaos Named

Atk will be treated as -15. This would make Spd Ninian's highest stat, which would trigger a penalty of Spd-5.

Struggles against units with high Resistance

The effects of Yune's skils trigger when her Res is 3 or more points higher that that of the foe. This makes it tough for her to deal with foes that have Res higher than her own, so it would be best to have an ally who can help cover this weakness.

As a flying unit, Yune takes heavy damage from bows and other weapons that are effective on flying units. When using her, stay out of the range of archers.

Units who can cast penalties on enemies

Yune gets +6 to her Atk as well as a guaranteed follow-up when foes have active penalties, meaning having teammates to help spread out enemy debuffs will help her immensely. While Yune does have a skill of her own for casting penalties, having multiple teammates fill the same role adds to Yune's power.

Units who can take down Red foes

Having a powerful ally on her team who can take down foes that have a type advantage will increase Yune's survivability. In particular, Yune struggles against physical attackers, so have a powerful unit like Ophelia or Tailtiu to take them out for her.

Additionally, a powerful dragon-type can also wipe her out, so having an anti-dragon unit like Legendary Marth or Legendary Alm on the same team is ideal.

Yune's Res stat is very high, but her meagre Def of only 15 means that a physical attack can be deadly for Yune. Her Spd stat is also nothing spectacular, so a powerful and quick attacker like Ayra or Lethe can gain a follow-up attack and finish her off.

Can be OHKO'd be Dragons as well

Since many dragonstones have the effect If foe's Range = 2, calculates damage using the lower of foe's Def or Res built into them, Yune's Def stat would be used rather than her Res. If you would like to use Yune to battle dragons, one solution is to have her inherit Mystic Boost, which would disable this type of weapon effect and allow her to defend with her Res stat.

Should you Unlock Potential for Yune?

Yune - Chaos Goddess Only Appears as a 5 Star Hero!

Yune as a Source Hero

Yune can be used to inherit the skills Atk/Res Bond 3 or possibly Sabotage Res 3. However, Yune is a Dark type Mythic hero who can give you a huge upper hand in Aether Raids, so we would recommend that you do not use her as a source hero.

How to Get Yune / Illustrations / Voice Actor / Quotes

How to Get Yune

Yune is a limited time Hero who can be pulled from a Mythic Hero Summoning event. They do not appear in regular summons.

Register as a member and get all the information you want. (It's free!)
Login
Opinions about an article or post go here.
Opinions about an article or post
We at Game8 thank you for your support.
In order for us to make the best articles possible, share your corrections, opinions, and thoughts about "Yune Builds and Best IVs" with us!
When reporting a problem, please be as specific as possible in providing details such as what conditions the problem occurred under and what kind of effects it had.