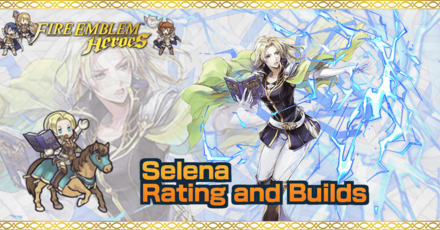 This is a ranking page for the hero Selena - Fluorspar from the game Fire Emblem Heroes (FEH). Read on to learn the best IVs (Individual Values), best builds (Inherit Skill), weapon refinement, stats at Lv 40, and more for Selena.

The best IVs for Selena are +Spd and -Res. A higher Spd stat allows Selena to get a ton of follow-up attacks on her foes. It also protects her from hostile follow-up attacks. Her Res is of less importance and thus safe to be taken as a bane.

It also helps her a ton if you plan to get Windsweep 3 onto her.

We recommend a +Spd IV when merging Selena to 10. This is for the same reasons as above. With this IV, she can reach 47 Spd which is at a range wherein she can score lots of follow-up attacks even without support from allies

Follow-up attacks also speeds-up Selena's special activation so make sure to inherit an offensive special onto her.

This is a budget build for Selena. Since she is very squishy, the goal of the added skills is to make sure that she takes out an enemy before they can land a counterattack. Spd Smoke 3 makes it easy for her allies to swoop in and finish the weakened enemies off.

Selena is a ranged magic attacker (range = 2). Therefore, when not accounting for the Weapon Triangle, the amount of damage she deals will be equivalent to her Atk minus the foe's Res stat.

This is also a great counter to skills like Quick Riposte 3 and Vengeful Fighter 3 which are skills that help slower, tankier units to score follow-ups on speedier, but more fragile units like Selena.

Atk/Res Ruse 3 inflicts Atk/Res -5 to enemies in cardinal diretions of Selena and her target unit / the unit that targets her whenever they use an assist skill. It also inflicts 【Guard】 to the affected foes.

Because Selena has access to Rally Atk/Res+, she can easily make use of the said skill. These two skills combined can create a gap of +11 Atk/Res between the buffed ally and the debuffed foe! This enables her team to deal more damage and cripples the damage output of the enemy team!

Selena's Def and Res sit at only 11 and 18 respectively. This makes her extremely fragile. Use her great mobility to position her away from enemies that can easily take her out and only engage enemies that she can finish off!

This statline is with Life and Death 4 at 5★.

Selena takes 1.5x damage from cavalry-effective weapons like Ridersbane, and one blow from this type of weapon is sure to take her down. Make sure you know what weapons you are up against before hopping too far into the line of battle!

Selena - Fluorspar Only Appears as a 5 Star Hero!

Selena as a Source Hero

Selena can be used to inherit Atk/Res Ruse 3 or Rally Atk/Res+. However, Selena is a powerful hero so make sure to think carefully before fodderring her off.

You can also get Life and Death 4 from her, but the 2 previously mentioned skills are much rarer and you can always have access to the weaker Life and Death 3 as it is very common.

How to Get Selena / Illustrations / Voice Actor / Quotes

How to Get Selena

Selena is a Hero who can be pulled from any summon.

Register as a member and get all the information you want. (It's free!)
Login
Opinions about an article or post go here.
Opinions about an article or post
We at Game8 thank you for your support.
In order for us to make the best articles possible, share your corrections, opinions, and thoughts about "Selena Builds and Best IVs" with us!
When reporting a problem, please be as specific as possible in providing details such as what conditions the problem occurred under and what kind of effects it had.