Who Should You Pull?
★ From Familial Festivities (Easter Banner)

This is a ranking page for the hero Sothis - Girl on the Throne from the game Fire Emblem Heroes (FEH). Read on to learn the best IVs (Individual Values), best builds (Inherit Skill), weapon refinement, stats at Lv 40, and more for Sothis. 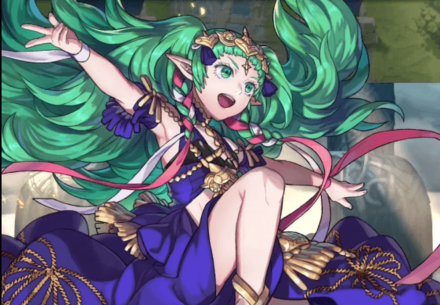 The best IVs for Sothis are +Spd and -HP. With a higher Spd stat, Sothis is capable of landing even more follow-up attacks, and the power of her special skill will increase as well. HP is of less importance, so it can be safely taken as a bane.

This Sothis build uses Null Follow-Up. If you do not have a unit to give up to inherit Swift Sparrow, her default A Skill Atk/Spd Solo will work just fine.

This is a low investment build for Sothis. Since her default skills already have good synergy, this build simply increases its utility by slapping on a Darting Blow Sacred Seal, making her ready for battle.

Sothis's Exclusive Weapon currently cannot be refined. This section will be updated if it becomes refinable in the future.

W!Sothis is a close magic attacker. Therefore, the damage she gives is equal to her Atk minus the foe's Res when the effects of the weapon triangle are not considered. Additionally, she can reduce the rate at which your lift decreases when defending in Aether Raids.

A Mythic Hero who can boost her allies' HP and Res

Sothis's Exclusive Weapon Sublime Surge can nullify enemy bonuses that are effective against dragons. Powerful units like Fallen Tiki and Alm who are normally dragon counters will have their strength cancelled out so that they only deal normal damage to Sothis. Additionally, she can counterattack from any range, allowing her to turn the tables on ranged attackers trying to safely attack from a distance.

Sirius, Sothis's exclusive special skill, will deal an additional 30% of her Spd stat as damage, and it will additionally allow her to recover 30% of the damage dealt. With its short cooldown of 2, the effects of Wrath and Time's Pulse will allow her to use her special from the start of each turn when her HP is below 75%.

Atk/Spd Solo 3 grants Sothis a huge bonus of Atk/Spd+6 when there are no adjacent allies. This stat boost allows her to make use of her other skills and easily take down opposing foes.

Res is rather low, making her susceptible to magic attackers

Sothis's base Res stat is only 27, meaning she is not great against magic attackers, and in particular, blue mages and dragons can easily sweep her. You will need to have an ally support her Res stat and generally kep her out of range from other magic attackers.

Should you Unlock Potential for Sothis?

Sothis - Girl on the Throne Only Appears as a 5 Star Hero!

Sothis as a Source Hero

Sothis can be used to inherit the skills Atk/Spd Solo 3 or Time's Pulse. However, as a powerful Dark Mystic Hero that can be used in Aether Raids, we recommend keeping at least one Sothis before foddering off any duplicates.

How to Get Sothis / Illustrations / Voice Actor / Quotes

How to Get Sothis

Sothis is a limited time Hero who can be pulled from a Mythic Hero Summoning event. They do not appear in regular summons.

Register as a member and get all the information you want. (It's free!)
Login
Opinions about an article or post go here.
Opinions about an article or post
We at Game8 thank you for your support.
In order for us to make the best articles possible, share your corrections, opinions, and thoughts about "Sothis Builds and Best IVs" with us!
When reporting a problem, please be as specific as possible in providing details such as what conditions the problem occurred under and what kind of effects it had.