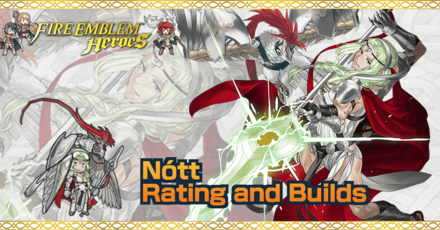 This is a ranking page for the hero Nótt - Moon's Elegeance from the game Fire Emblem Heroes (FEH). Read on to learn the best IVs (Individual Values), best builds (Inherit Skill), weapon refinement, stats at Lv 40, and more for Nótt.

The best IVs for Nótt are +Spd/-Res.

Since Nótt already comes with very high attack, having more Spd will increase her chances of doubling.

Her Res is lthe lower stat of her defenses, so it woould be safe to take it as a bane.

This is for the same reason as above. Nótt will have 47 Spd at 10 merges, making her extremely formidable due to the buffs she gets from Hrímfaxi.

She will need all the Spd she can get in order to maximize her usage of her Moon-Twin Wing skill.

This is a build designed to give Nótt the most points in Arena. Her base kit skills are already good for scoring, and just needed a Dual Rally for her Assist skill and a high-scoring Special like Ruptured Sky.

This is a budget build for Nótt that makes use of her default skills with some skill inheritance. Her base kit is already good enough to be effective.

Nótt is a close physical attacker (range = 1). Therefore, when not accounting for the Weapon Triangle, the amount of damage she deals will be equivalent to her Atk minus the foe's Def stat. 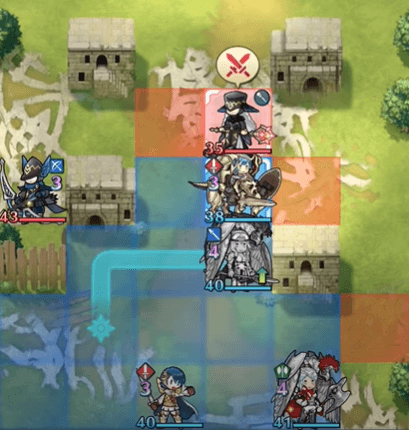 As seen above, Hrímfaxi granted additional movement to Reginn. She would not have reached that spot from her original position if Nótt and 【Pathfinder】. Specifics can be read in the skill tooltip.

Allies can take advantage of this skill to pull off surprise attacks that they would otherwise be unable to do. This is very useful in Aether Raids as each square of movement in this fast-paced game mode is important.

Moon Twin-Wing gives Nótt up to 40% damage reduction if her Spd is higher than her foe's.

The chances of this triggering is high, as it also inflicts Atk/Spd-5 during combat if her HP is ≥ 25%.

Atk/Spd Menace also enables this further, as she gives herself Atk/Spd+6 while inflicting Atk/Spd-6 to nearby enemy units at the start of turn.

This makes Nótt a good study unit that can tank different types of attacks.

Base kit makes up for good mixed phase performance

Thanks to the stat gaps she can create with her kit, the Spd-based damage reduction, and her Distant Counter, Nótt makes for a good mixed-phase unit. This is perfect for an Aether Raids Defense unit who will most probably find herself controlled by AI.

This means that even if her Spd is high and she can buff herself, she cannot negate skills that give her penalties, which may put her in a vulnerable position.

Distant Counter not native to weapon

Because Nótt's weapon, Hrímfaxi, does not have Distant Counter built into it, Nótt needs to have said skill in the valuable A slot. This makes her miss out on powerful A slot skills like Fury 4, Atk/Def Ideal 4, or Atk/Spd Push 4.

Nótt can fit in a wide variety of teams as she can mostly take care of herself and is a powerful unit.

She can be paired with those that can boost her firepower even more, like Legendary Eliwood's Bonus Doubler effect on his Ardent Durandal or any of the dancers above.

She can also act as a bridge for her allies due to her Pathfinder skill, enabling them to cross even further across the map.

Though she does boast high Atk and Spd, Nótt may struggle against tanky units that are built and merged well. Units such as Brave Hector and all of Edelgard's armored versions may may her struggle.

Nótt may have Distant Counter and can buff herself, but due to her lower Res, high power Green mages such as Legendary Celica will have no problem blasting through her.

Units that also outspeed her will also disable her Moon-Twin Wing - Ninja Hana when she's built well and Fallen Dimitri come to mind.

Nótt - Moon's Elegeance Only Appears as a 5 Star Hero!

Nótt as a Source Hero

Nótt can be used to inherit Distant Counter or Atk/Spd Menace.

There are other units that have Distant Counter, though you can get Atk/Spd Menace from Nótt, as she is the first unit with this skill.

However, Nótt is a powerful Mythic hero whom can unlock a 7th defense slot in Aether Raids. Please think carefully before foddering her off!

How to Get Nótt / Illustrations / Voice Actor / Quotes

How to Get Nótt

Nótt is a Hero who can be pulled from any summon.

Register as a member and get all the information you want. (It's free!)
Login
Opinions about an article or post go here.
Opinions about an article or post
We at Game8 thank you for your support.
In order for us to make the best articles possible, share your corrections, opinions, and thoughts about "Nótt Builds and Best IVs" with us!
When reporting a problem, please be as specific as possible in providing details such as what conditions the problem occurred under and what kind of effects it had.