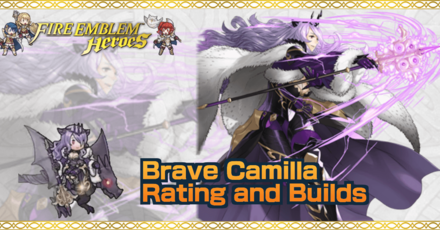 This is a ranking page for the hero Camilla - Light of Nohr from the game Fire Emblem Heroes (FEH). Read on to learn the best IVs (Individual Values), best builds (Inherit Skill), weapon refinement, stats at Lv 40, and more for Brave Camilla.

Brave Camilla's best IVs are +Spd and -Def. With a +Spd IV, it will be easy for Camilla to gain follow-up attacks, allowing her usefulness as an attack phase unit to increase. On the other hand, her Def is quite low, so it is an ideal dump stat.

Brave Camilla's Exclusive Weapon currently cannot be refined. This section will be updated if it becomes refinable in the future.

B!Camilla is a ranged magic attacker (range = 2). Therefore, when not accounting for the Weapon Triangle, the amount of damage she deals will be equivalent to her Atk minus the foe's Res stat when she has Wrathful Staff equipped. In addition, she has an assist skill that can gratn additional movement to allies who have completed their turn.

When initiating combat, Camilla's exclusive weapon skill 'Sanngriðr' will restrict the movement of a targeted foe and foes within one space of that foe to just one space. In addition to having the effects of the skill 'Gravity', she will also gain Atk/Spd +3 when initiating combat, and foes cannot counterattack, making her a very useful attack phase staff unit.

B!Camilla's Passive A skill Atk/Spd Push 4 will give her Atk/Spd +7 when her HP is at or above 25%. With her buffs combined, she gains a whopping Atk/Spd +10 during combat when she attacks first, making it very easy for her to gain a follow-up and wipeout foes.

As a flying unit, B!Camilla will take heavy damage from bows and other skills that are effective on flying units. One shot from an archer like L!Alm or Klein will wipe her out, so make sure you keep her out of the range of any bow wielding units.

Having a unit with high defensive stats on the same party can help shield Camilla from arrows and greatly increase her longevity. Having a unit like F!Tiki or L!Tiki who can endure an attack and then counter at any range is our recommendation.

Having a dancer on your team like L!Azura or Flying Olivia can allow B!Camilla to gain extra movement and escape the danger zone after healing an ally. With her staff that has the effects of both Gravity and Dazzling Staff built into it, B!Camilla can easily be used as a Hit-and-Run type attack phase unit.

Units with Raven-Tomes or weapons effective on fliers

B!Camilla is a colorless flying unit, so she will take a ton of damage if she is attacked by a foe with a bow or a raven-type tome. Keep her out of reach from units like Cecilia or L!Alm, etc.

Should you Unlock Potential for Brave Camilla?

Camilla - Light of Nohr Only Appears as a 5 Star Hero!

Brave Camilla as a Source Hero

You can use B!Camilla to inherit Atk/Spd Push 4. However, as she is already quite a valuable hero as is, we recommend keeping one unit before foddering off any duplicates.

How to Get Brave Camilla / Illustrations / Voice Actor / Quotes

How to Get Brave Camilla

Brave Camilla is a Hero who can be pulled from any summon.

Register as a member and get all the information you want. (It's free!)
Login
Opinions about an article or post go here.
Opinions about an article or post
We at Game8 thank you for your support.
In order for us to make the best articles possible, share your corrections, opinions, and thoughts about "Brave Camilla Builds and Best IVs" with us!
When reporting a problem, please be as specific as possible in providing details such as what conditions the problem occurred under and what kind of effects it had.