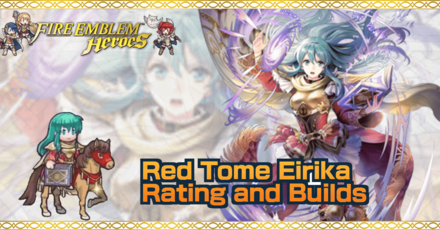 This is a ranking page for the hero Eirika - Anamnesis Lady from the game Fire Emblem Heroes (FEH). Read on to learn the best IVs (Individual Values), best builds (Inherit Skill), weapon refinement, stats at Lv 40, and more for Red Tome Eirika.

The best IVs for Red Tome Eirika are +Spd and -HP. A higher Spd stat allows Eirika to prevent follow-up attacks and help her make follow-up attacks on her own. This boosts both her offensive and survivability capabilities. HP is much lower priority than her other stats, so it can be safely taken as a bane.

We recommend a +Spd IV when merging R!Eirika to 10. With a +Spd IV, Eirika's Spd stat will reach 42 with 10 merges, which makes it even easier to prevent follow-up attacks from enemies and allows Eirika to get even more follow-up attacks on her own.

We recommend the Special Effect Refine for Gleipnir

Gleipnir's special effect is easy to trigger and is very powerful as it buffs Eirika, Debuffs the Enemy and neutralizes Eirika's penalties. The only condition to trigger this is that the enemy unit's HP must be 100%, making it very easy to trigger. We recommend getting this special refinement as it makes Eirika a great unit for initiating battles with.

R!Eirika is a ranged magic attacker (range = 2). Therefore, when not accounting for the Weapon Triangle, the amount of damage she deals will be equivalent to her Atk minus the foe's Res stat.

R!Eirika's exclusive weapon, Gleipnir grants Eirika +3 Atk/Spd whenever her foe's HP is 100%. Combined with its special refinement effect and Swift Sparrow 2, Eirika is able to make powerful follow-up attacks against many enemy units.

The B skill Desperation 3 allows Eirika to make follow-up attacks before enemies can counterattack if her HP is ≤ 75%. It is fairly easy to trigger, but the effect is very powerful.

Red Tome Eirika has low survivability stats. If Eirika is attacked, there is a high possibility that she will be taken out. Always be mindful of Eirika's positioning in relation to the enemies who pose a threat to her in the enemy phase regardless if she can counterattack or not.

Red Tome Eirika is a Cavalry unit making her weak to skills against such units such as Ridersbane+. If attacked by a unit with Ridersbane+, Eirika will take 1.5x damage. Be mindful of what skills your enemies are equipped with.

Since Eirika is a cavalry unit, she benefits from skills like Hone Cavalry. Red Tome Eirika also greatly benefits from Reyson and Leanne who both have Sing. She is a cavalry unit that can move 3 squares per action so Sing makes her extremely mobile. This allows her to move in and out of the danger zone or attack multiple enemies in the same turn.

Red Tome Eirika is rather fragile and can't take that many attacks before going down, especially from blue units. It would be best for Eirika to have an ally who can take down blue units for her so she can safely focus on the other units.

Red Tome Eirika is very fragile and she can't afford to be in the danger zone in the enemy phase. Units that specialize in offense can easily take her out. Always be mindful of Eirika's positioning in relation to the enemies who pose a threat to her in the enemy phase regardless if she can counterattack or not.

Duma's Upheaveal or skills like Pain+ and Savage Blow 3 damage inflicts a bit of damage to enemies who would be otherwise 100%. This takes away the special effect of Gleipnir and thus lowers Red Tome Eirika's effectiveness, so they don't make great teammates for Eirika.

Should you Unlock Potential for Red Tome Eirika?

Eirika - Anamnesis Lady Only Appears as a 5 Star Hero!

How to Get Red Tome Eirika / Illustrations / Voice Actor / Quotes

How to Get Red Tome Eirika

Red Tome Eirika is a Hero who can be pulled from any summon.

Register as a member and get all the information you want. (It's free!)
Login
Opinions about an article or post go here.
Opinions about an article or post
We at Game8 thank you for your support.
In order for us to make the best articles possible, share your corrections, opinions, and thoughts about "Red Tome Eirika Builds and Best IVs" with us!
When reporting a problem, please be as specific as possible in providing details such as what conditions the problem occurred under and what kind of effects it had.