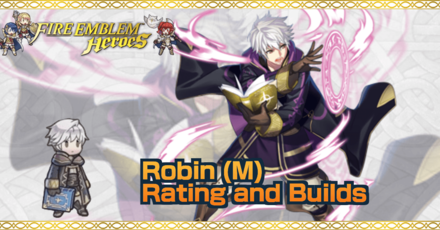 This is a ranking page for the hero Robin - High Deliverer from the game Fire Emblem Heroes (FEH). Read on to learn the best IVs (Individual Values), best builds (Inherit Skill), weapon refinement, stats at Lv 40, and more for Robin (M).

Robin's best IVs are +Def and -Spd. The best builds for Robin revolve around Tactical Bolt's ability to grant him a weapon-triangle advantage over colorless foes, plus inherting Triangle Adept 3 onto Robin (M) to make him very tough against colorless bows and swords. The Def IV allows him to tank most physical units except for green units. He can afford to take a Spd superbane, as his Spd is not that low, but make sure to merge another Robin to get rid of the superbane if you plan to invest big on Robin.

We recommend the Special Effect Refine for Tactical Bolt

The special refinement effect of Tactical Bolt grants a +4 buff to all stats for allies within 2 spaces provided that there are only 2 or less units of the same movement type. This makes Robin a good unit in mixed teams, as the buff is equivalent to a +10 merge. This allows Robin (M) to become a support unit on top of being a solid offensive option.

Robin is a ranged magic attacker (range = 2). Therefore, when not accounting for the Weapon Triangle, the amount of damage he deals will be equivalent to his Atk minus the foe's Res stat.

Blárraven+ and Tactical Bolt allow Robin to gain a weapon-trangle advantage over colorless units. This allows Robin to deal with many units, as he is strong against 2 attributes. Robin will become even stronger if you inherit Triangle Adept 3 onto him, as it can stack with the effects of his weapons.

High Def for a Magic User

Robin has an unusual characteristic for a magic user, as his Def is higher than his Res. This synergizes well with Robin (M)'s playstyle, as his advantage over colorless units makes him fit to combat with the many colorless bow units, colorless dagger units and some colorless physical powerhouses like Caineghis. This also makes him a hard counter for many sword units as well.

Since Robin (M) is strong against colorless units, which are very common in Grand Hero Battles, he is an ideal unit to go into those maps with. In additon, he can also deal with sword units pretty well, some of which appear as powerful Grand Heroes that will join your army if you defeat them.

Robin (M) does not possess any standout stats, and this makes it hard for him to fill very specific niches. Though he can tank both physical and magical attacks decently, he will surely fall to green-attribute units regardless of attack type. Be mindful of his positioning in relation to green units.

Easily Taken Out by Magic Units

Robin (M)'s Res is only 22 at Lv. 40 This makes him very vulnerable to magic units. Be mindful of his positoning in relation to units that can easily take him out, especially green tome units like L!Celica.

Should you Unlock Potential for Robin (M)?

Robin (M) as a Source Hero

Robin (M) can be used to inherit the skills Bonfire at 4★ and Blarraven+ at 5★.

How to Get Resplendent Robin (M) / Illustrations / Quotes

How to Get Resplendent Robin (M)

Resplendent Robin (M) can be obtained by buying a FEH Pass. After the distribution period has ended, they can also be purchased by FEH pass subscribers.

How to Get Robin (M) / Illustrations / Voice Actor / Quotes

How to Get Robin (M)

Robin (M) is a Hero who can be pulled from any summon.

Register as a member and get all the information you want. (It's free!)
Login
Opinions about an article or post go here.
Opinions about an article or post
We at Game8 thank you for your support.
In order for us to make the best articles possible, share your corrections, opinions, and thoughts about "Robin (M) Builds and Best IVs" with us!
When reporting a problem, please be as specific as possible in providing details such as what conditions the problem occurred under and what kind of effects it had.